You are here: Home / Travel / A Color Coded Map of Thailand (Including Provinces) & Regional Overview

If you're looking for a map of Thailand, this is a pretty good one to get an overview of the regional boundaries.

It is color coded by region, carving up the Central, South, North, and Northeast Thailand, and features the main provinces.

It's not the best quality and is a little dated now, but I'm planning on getting a better version done.

I've written a little overview of each region to give you a feel for the area.

The pink section of this map of Thailand highlights the delightful North.

Deep set in history of kingship, war, and cross territory trade, the north is of huge historical importance to Thailand, not least because here, in Sukhothai province, King Ram Khamhaeng, the third king of the Phra Ruang dynasty, is said to have created the Thai alphabet.

The North is home to a unique and diverse mix of culture that spans Burmese, Yunnan, Thai, and Laotian, along with numerous tribal peoples.

There are 9 main tribal groups in the North:

The Long neck Karen are among the most fascinating for visitors because of the brass coils worn around the female tribe member's necks.

The most popular city in the North, at least for foreign folk, is Chiang Mai, which offers a great balance between city and rural life and makes a good alternative to Bangkok living.

That said, you'll find expats living all over the North, as it's a really easy place to lose a few years living well for cheap among the easy-going Northern folk.

The North is blessed with beautiful landscape, with places such as Pai, Nan, and Chiang Rai offering endless natural beauty.

For the most part the Northeast is flat and dry. Its vast, open plains make it very hot and not the most desirable part of Thailand to live.

That said, the region is known for its hospitality, colorful characters and laid back way of life.

Isaan is the backbone of the rice production industry and historically the poorest region of Thailand. It's blood, sweat, and tears to earn a crust in the deep rural parts, which is why so many from poorer backgrounds migrate to Bangkok for work.

Archaeologically, the area is of great importance. Evidence has been found in the Khorat Plateau of prehistoric inhabitants who may have forged bronze implements as early as 3000 B.C. and cultivated rice during the fourth millennium B.C.

Of particular interest is the Ban Chiang UNESCO archaeological site in Udon Thani Province, where remains have been found of some of the earliest people to have inhabited Thailand as we know it today (1).

Additionally, the Sirindhorn Museum and Phu Kum Khao Dinosaur Excavation Site in Kalasin, and the ancient Khmer temples in Roi Et, are notable historical sites worthy of a visit.

People to the north of the region speak a mixture of Laotian and Thai, known as Thai-Isaan, and in the South of Isaan – in Korat, for example – a mixture of Khmer and Thai.

Home to more temples than you'll ever want to visit, unique Isaan cuisine, and a cross section of culture, Isaan never fails to charm, whatever corner you visit.

The South is unique in many ways, not least because like the North and Northeast, it has its own regional dialect, which is generally difficult for Thais form other areas of the country to understand.

Situated on the Malay peninsula, each year millions of travellers head to the fantastic beaches on one of the many islands like Phuket, Samui, Railay, Koh Phangan, etc.

The South needs no talking up. It's blessed with stunning beaches and bays, island getaways and beautiful national parks such as Khao Sok, which boasts virgin jungle and tower-like limestone karst formations.

There is a darker side, though. The deeper, southernmost provinces of Yala, Pattani ,and Narathiwat have struggled with an Islamic insurgency over the years.

The insurgency’s roots date back to Thailand’s annexation and conquest of the Malay Sultanate of Patani. Following the annexation, a series of forced assimilation measures stoked tensions and failed to take hold, leaving the area disenfranchised up until the modern day.

Thankfully, although deserted during the COVID-19 scare, the tourist areas of the upper South have always remained unaffected by violence and flourished on the tourist dollar.

That said, tourism accounts for only 8% of the South's gross regional product. The biggest portion comes from agriculture at 27% (2).

Central Thailand is home to Bangkok, aka the City of Angels, or Krung Thep Maha Nakhon, to say its full name.

Well, actually, not quite, this is still an abbreviation of the city's full ceremonial name, which is the longest place name in the world.

Not for the faint hearted, Bangkok is a city that must be experienced for its 24-hour, anything goes atmosphere, street markets and general fusion of Thai culture.

Once you reach the point of overexposure, you can take a 4-hour drive to the divine Kanchanaburi, home to the River Khwae and many delightful beauty spots.

It's here that you'll also find the Death Railway, built during WWII and featured in the hit film The Railway Man.

Or perhaps head two hours south for a quick beach break in the quaint, royal town of Hua Hin, or head in the opposite direction for a break to Sin City (Pattaya), in Chonburi.

If you're in the region, travel 80 kilometers from Bangkok to Ayutthaya and see the ancient temples. Ayutthaya was the Siamese capital for four centuries, until it was all but destroyed by the Burmese in the 18th century. It's now a UNESCO-listed area and offers a glimpse of its former glory. 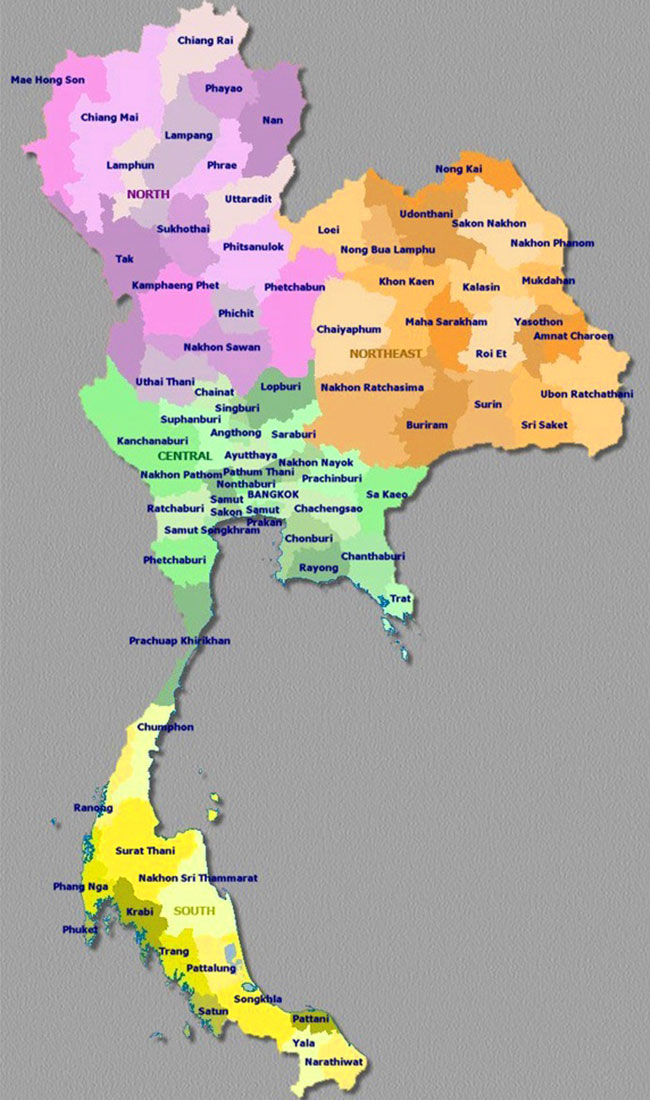 Click on the map to view it as a single image. You can then zoom in better.

What's your favorite region of Thailand?

What provinces have you visited and what were your experiences?

Leave your comments below.