You are here: Home / Thailand Living / Retiring in Thailand – How Much Does It Cost?

A recent study carried out by NetCredit estimated that a person needs approximately $390,000 (US) to retire in Thailand.

The study covered most countries of the world, with the goal of estimating the cost of retirement based on the equivalent quality of life you'd enjoy back home.

The research was based on the following lifestyle for 1 person:

The cost was calculated over 14 years: retiring at 64 and with a life expectancy of 78.7 years.

But how does this translate to the real world? And considering the outcome, is it cost effective to retire in Thailand.

How Accurate is This Retirement Study?

It's easy to criticize this study for what isn't factored in, and the fairly simplistic financial calculations it uses.

It doesn't take into account a forecast for inflation, or interest earned on savings.

Savings aren't static, even though it might seem that way if the money is just sitting in an account. The cost of living rises (generally), so the value of your money (spending power) decreases over time, unless you are earning an interest rate in line with, or higher than, inflation.

For the sake of argument, let's say that the interest earned is in line with inflation, and that the spending power remains the same over 14 years.

One should also note that few people have this much cash in savings. A more likely scenario is having the equivalent in pension payouts over the 14-year period. Most retirees have modest savings and a half decent pension. Some may have savings and just a state pension.

Either way, the amount required is still the same.

The Cost of Retiring in Thailand

I usually ignore this type of research because seldom is it accurate. But this is surprisingly accurate.

One of the main reasons Thailand is such an attractive destination for retirees is because there are different standards of living available. You can live dirt-cheap or super expensive in Thailand.

Therefore, people will no doubt comment that you can live on half the amount I've cited above.

It's true. But I think 70k a good monthly amount to aim for if you are considering retirement in Thailand. And if you don't spend that much, it's more to leave your kids :).

There are expats who dine in silly-priced restaurants, buy a German car at twice the price you'd get one for in Europe, rent a condo on Wireless Road for 80k+ a month, and fly first class.

And then there's expats eating for 100 Baht a day and staying in a 4k a month condo. I'm not judging either way.

Not everyone will require a moped, but some may want a car.

Some people will accept an average condo and reduce their rent, while others will keep eating out expenses low to live in a more modern, spacious dwelling.

There are many variables, including living rurally, which is much cheaper.

Also consider that some expats live in the family home of their partner, or a home they have built, and therefore don't have to pay rent.

For many, living expenses may be as low as 40-50k per month.

That said, for a single person in Bangkok, Pattaya, Hua Hin, Samui, or Phuket, paying rent, I still think you could live quite well on 50-60k per month. 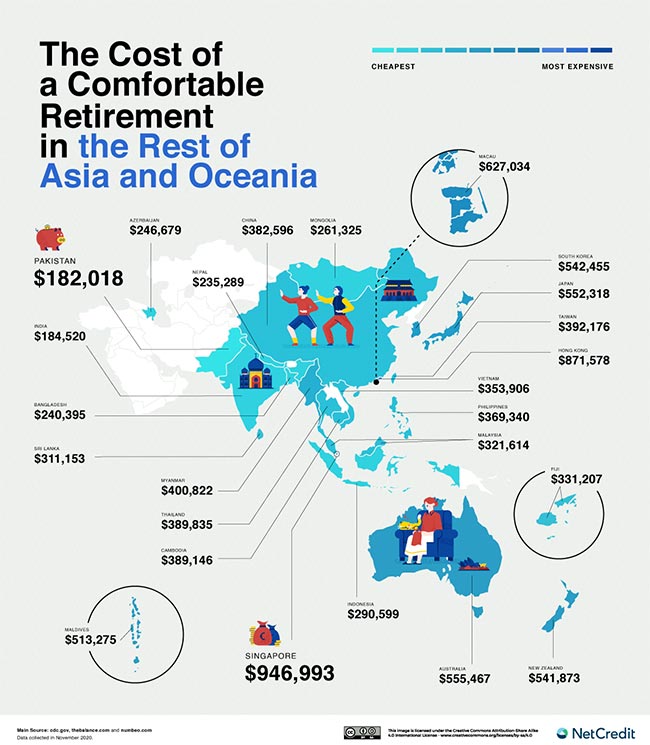 Sorry, you'll have to zoom in on the image to see the country names.

Thailand Vs. The Rest of the World

And so it begs the question: is Thailand value for money when it comes to retirement?

Here's some other countries of interest:

Thailand Vs the Rest of SE Asia

You're probably thinking that Portugal, Italy and Mexico look like pretty good options, but you like Asia, right?

So let's look at how neighboring countries stack up to Thailand. The following countries all work out cheaper than Thailand for retirees:

I think these comments hold some weight in a debate of historical context, but I don't think that's the whole picture. Global economic shifts have devalued some Western currencies and made Thailand more expensive. But…

There are downsides to Thailand, perhaps the biggest being health and safety. Thailand has very high road traffic accident levels and, depending on where you're living, pollution can also pose a hazard to your health.

Like many second world countries, regular reports of police corruption may worry some, but these problems always seem to exist where it's “cheap”.

I think the aforementioned downsides are more of a concern to those with children, perhaps a family considering relocating in their late 30s, 40s or 50s. These issues can become a threat to the safety of children.

Those with kids also have schooling to consider. Good private schools are expensive here, and that's where the balance is likely to tip in favor of living “back home”

Is the average retiree at 65 years old going to be worried about road traffic accidents or poor electrical wiring standards?

Most will take the view that the benefits outweigh the risks and, with a little extra caution, one can avoid something unfortunate happening. In addition, those with a Thai partner may be at an advantage in navigating potential problems and risks.

And then there's traveling back to home now again. If you still have assets and family back home, that 13-hour trip (for me) gets increasingly tiresome with age, particularly dealing with the jetlag.

However, other countries in SE Asia aren't immune to these problems either.

I personally quite like Vietnam, but I just don't get the same vibe there as I do in Thailand.

Some would argue that for not too much more you could live in Portugal, Spain, Italy or Greece. These places have stunning beaches too. I agree. I love Italy. I'm also a fan of Switzerland, but it's way too expensive and lacks the beaches.

Lots of food for thought.

The original retirement study can be found here.

How accurate do you think this study is, and is Thailand still your preferred choice for retirement?

Want More on the Cost of Retiring in Thailand?:

Find out how it stacks up against North America, Europe and Asia. Click here.