You are here: Home / Culture / Thai Culture: 15 Customs You Should Know

Culture shock isn't unusual for those new to Thailand, but it's all part of the experience of traveling / living in another country.

Customs may differ from region to region, too, and on your travels up and down the country you are likely to come across many different traditions, beliefs, and superstitions.

However, the customs in this list are pretty standard across Thailand, perhaps with the exception of the couple of superstitious ones I threw in at the end.

Of course, not all Thais adhere to these customs and you may find that some of my generalizations don't apply to your partner or friends.

Either way, it's always good to be aware of local customs so that you can better integrate and interact with Thai people. 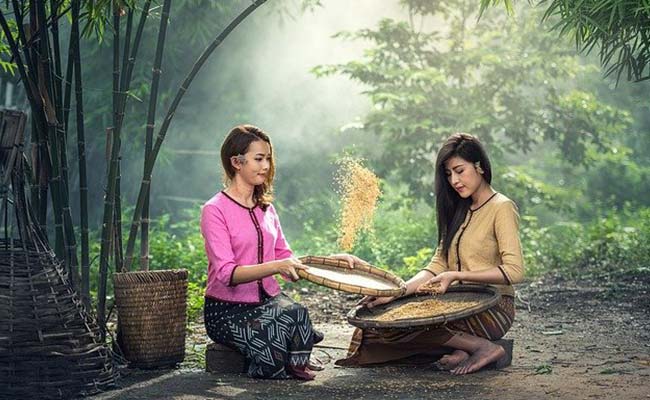 Thai Culture – 14 Customs You Should Know

1. Don't Shake Hands or Give Hugs

Thailand is famous for its warm and welcoming people, thus its nickname “the land of smiles”. However, despite being really friendly, being touchy isn't a part of Thai culture.

In fact, even shaking hands is a bit of a no-no, and going in for a hug is certainly off limits, unless of course it's your partner or someone you know extremely well.

Instead, use the traditional Thai greeting (the wai) as a way of saying hello and being polite.

Unlike in the west, where talking politics over dinner is commonplace, it tends to be a subject most Thais want to steer clear of. This is probably because the serious nature of politics unbalances the Thai quest for peace and harmony.

On a similar note, you probably know that the Royal Family are very important to Thais and are revered by the nation. However, most Thais do not discuss the Royal Family at great depth and prefer not to comment on their actions or personal lives. It is therefore a good idea to avoid this subject altogether.

Raising your voice is unacceptable in Thailand and considered an act of losing control.

Quiet and humble is always the best approach and you certainly won't achieve anything by becoming aggressive or loud.

Jai yen yen (cool heart) instead of Jai rawn (hot heart) is the way of the Thai – at least until someone really boils over, that is.

This is noticeable in that people tend not to complain of bad customer service of over pricing, but rather just move on and let it go.

It generally makes for a nicer society, but there is a downside. If people don't complain and voice their opinion, lower standards often prevail.

If you visit a Thai person's home and take a present for the host, you may find it is well received but immediately put to one side and left unopened. Don't be offended by this.

It is actually considered rude to open the present there and then in front of the giver.

A Thai person is more likely to wait until you have left to open the gift. This is part of the “krengjai” custom (in consideration of someone else's kindness).

If you really want the person to open the present while you are there, it's fine to ask. But expect some shyness about it.

5. Always Take Off Your Shoes

Shoes must be taken off upon entering someone’s home; no matter whose home it is.

Shoes walk outside and pick up all manner of dirt, which people don't want in the home – especially considering that Thais often eat sitting on the floor.

Even if you get a “mai pen rai” (no problem/it’s okay), you should take them off because the person is just being polite.

Don't touch anyone on the head, unless you want to really upset someone.

In contrast to the feet, the head is considered the sacred part of the body and not to be touched without permission. Certainly don't put your feet near someone's head!

You may see an adult give a child a rub on the head, but I would refrain from this unless the child is in your extended family and a bond has already been established.

Pointing at someone is a no-no in Thailand and is considered an aggressive behavior.

Your Thai friends won't take offense if you point when joking around, as they will understand that as a foreigner you may point instinctively.

However, don't point at monks or pictures of any of the Royal Family, and as a general rule don't point at people when making reference to them; it's rude.

If you need to point someone out, instead of extending your finger, bend your hand downwards with your fingers leaning toward the floor and your palm facing upward.

8. Duck Down When Walking Between People

This is a common interaction you'll see on a daily basis in the workplace and at shopping centers.

When a person walks between other people, the person will duck down slightly to acknowledge the interruption and subtly apologize without speaking.

Sometimes this will be accompanied by a vocal “excuse me” or “sorry”.

The same applies if you walk past a person and block out their vision for a split second.

Thai culture is generally quite conservative, and dressing modestly is considered the appropriate way. That means not showing too much skin (for women), and not walking around with your top off (for men).

Now, you may be scratching your head a little here, thinking about the women you've seen in Bangkok dressed in short skirts, heels and backless tops, and that's just when shopping in the mall!

But that's Bangkok, a big city where many go to escape rural conservatism, and it's a minority when you look at the bigger picture.

In Thailand, the inviter pays for the meal. In cases where it is unclear who the inviter was, the superior will usually pay. Unless it's someone's birthday, in which case they are expected to pay.

Remember, if you are going on a date with a Thai woman, don't think going “Dutch” is an option. It isn't, and you may well be seen as tight (kee-nee-ow) for expecting to split the bill.

In this part of the world, men pay the way on dates, I'm afraid.

Nothing annoys my wife more than me mixing up the separate Thai dishes she's cooked, or using a spoon from one dish and putting it into another.

This is because a Thai meal usually consists of multiple dishes, each with its own unique expression of flavors intended to be tasted separately.

The proper way to eat is to start with a bowl / plate of plain rice, and to scoop a spoonful of a dish you want to eat onto the rice. You finish this first before moving onto try another dish.

Rice is a staple of the Thai diet, but also culturally significant. Even the word for meal translates to “eat rice” (Gin khao).

Rice is considered almost sacred. It is the carbohydrate that provides energy for the nation and keeps people fed in tough times.

Thais will endeavor to eat all of the rice they put on their plate and rarely throw any away. Rice is treated with great respect because of the farmers who work so hard to plough the fields and plant and harvest the rice.

When you sit down to a Thai meal you will notice the absence of a knife. Well, you'll have to get used to eating with just a fork and spoon.

The fork will be to your left and the spoon to your right. Use the fork to push food onto the spoon and then eat from the spoon.

When you have finished eating, place the fork directly onto the spoon to let other know that you are full.

There are ghosts everywhere in Thailand, apparently. Some are good, some bad, and some just mischievous.

One custom that isn't so widely practiced anymore is to ask permission from the phra phum (spirit ghost of the land) for a visitor to stay in the house.

This custom still exists, mainly in rural areas of the country, but also among the very superstitious.

Some Thais will perform this ritual before going to sleep in a hotel room, because it isn't their home and they want to ensure the spirit doesn't cause them any trouble.

15. Step Over a Threshold

If you visit a building or home with a threshold (the strip or wood or metal that runs across the bottom of an entry door frame) it is polite to step over it and not on it.

This superstition relates to the spirits that inhabit a home. One of the spirits is said to live in the door threshold. If you step on the threshold, you may anger the spirit and bring bad luck to the family.

+ Your Next Read: What's Behind All 13 Thai Smiles?