You are here: Home / Culture / How to Do the Perfect Thai Wai (to the Right Person at the Appropriate Time)

The Thai wai is not just a way of saying “hello” but a gesture of respect that represents the social status of the recipient. It is also used as an accompaniment to an apology,

The wai is similar in culture to the Indian namaste and Burmese mingalaba, and is an integral part of organizing the complex social hierarchy that binds Thai society together.

While as a foreigner you may feel inclined to treat everyone as an equal, wai'ing those of obvious social inferiority may create a situation of awkwardness for the inferior.

Strange to us, maybe, but culturally true in Thailand.

By lower I am referring to the position of the hands and how far down you bow your head.

That being said, on occasion you may see exceptions to this rule.

For example, you might see a Thai person return a wai to a child out of fun or affection. But as a foreigner it is advisable not to do this, and instead stick to the guidelines set out below.

Thais instinctively know when a wai is appropriate because they have grown up with this custom, but we foreign-folk don't have this built-in understanding. 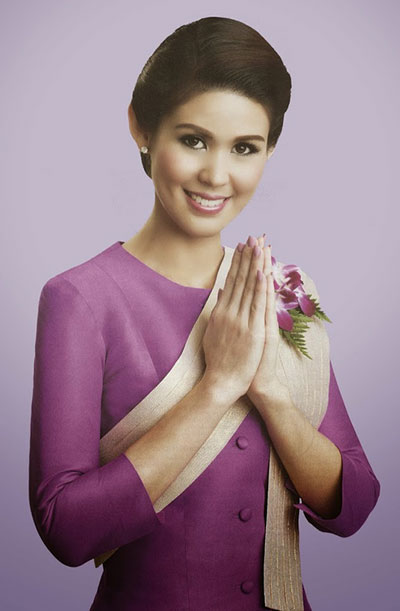 How to Perform a Wai

A wai is performed by pressing the palms together while keeping the fingers and thumbs closed together.

The fingers are pointed upwards and the elbows are neatly tucked in. keep your back straight.

In the modern day (generally), the head is lowered so that the nose falls towards the top of the fingers.

However, traditionally, and more so seen in rural areas these days, the back of the thumbs tend to be brought upwards toward the face (nose area) in a more pronounced manner, and the nose rested on top of the thumbs – often regardless of the status of the person being wai-ed.

I would suggest sticking with the more modern approach, as it is easier to “over wai” with the latter.

The lower the head comes down to meet the thumbs of the hands, the greater the respect being shown.

In some instances, as we we will explore below, the hands adopt a higher position in relation to the head.

Make sure you keep your elbows tucked in when you perform a wai; foreigners have a tendency to let their elbows spread out and raise upwards.

People also have a tendency to rush the wai when in fact it should be graceful and controlled in its execution.

Don't go too slowly and make a big deal of it, but don't flick your hands up and down like you can't be bothered.

1. Someone of equal status or when you are unsure of someone’s status:

Pull your hands close to your body, elbows in with fingertips reaching to about neck level (see image above) but not above your chin. Now lower your head. This is a good enough wai in everyday situations.

2. Someone of lower status than you

Follow the same instructions as number 1, but this time keep your head straight or only slightly inclined as you wai. You can also keep your hands fairly low, since the height of the hands is an indication of the other person's status of authority.

3. Someone of higher status than you.

This time, lower your head so your fingertips reach above the tip of your nose. you can bring your hands up higher in this instance.

To wai a monk, press your palms together and raise them up to your nose, keeping your elbows tucked in.

Now bow your head into your thumbs. Some people will pull their thumbs right up into their forehead (while lowering the head, of course) in this situation.

There is a good example in the video below.

When at a temple, depending on the occasion, it may be appropriate to get on your knees and wai, but have a look at what others are doing first.

Traditionally, in the temple, men sit on their heels, and women with their legs to one side. The idea is to bend your head and body, lowering from the waist down, while keeping your bottom as low as possible.

When your head is almost touching the floor, place your palms on the floor (traditionally, the right hand should touch the floor first) and rest your head on top of your clasped palms in the wai position.

Now straighten back up to the seated wai position. If wai-ing a Buddha image, this process is generally repeated three times. 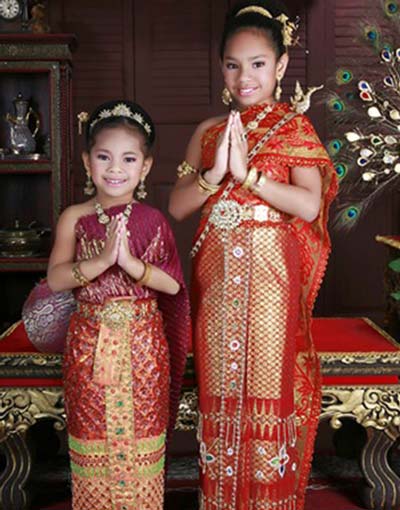 Children performing a standard wai. From this point the head would be lowered towards the hands while keeping the back straight.

A Final Word on Wais

If in doubt, unless it is a child or other person obviously of a lower status, simply return the same wai you are offered.

It's easy to get hung up on whether you are wai-ing correctly, but it doesn't matter to Thai people if you get it wrong.

People understand that you are trying to do the right thing and appropriate the culture. This is appreciated and no one is going to think badly of you for performing an incorrect wai.

In fact, in the video above, Khun Mod gets it wrong and writes a note of correction at the bottom of the edited video that states what she should have done.

The thing is, she didn't really get it wrong as much as it wasn't done in the very traditional way. Like many traditions, the execution changes from generation to generation, and even region to region.

Please note that this is a general guide to point you in the right direction. You will see variation among Thais themselves.

Some men wai everyone pretty highly, and some women use a really elegant wai every time, while others flash a fairly quick, low wai each time because they aren't really into the whole “wai” thing.

Credit: Some of the information in this article was researched from the book Culture Shock! Thailand, By Robert & Nanthapa Cooper.