You are here: Home / Culture / Jai Yen Yen – What Does It Really Mean?

Jai Yen Yen (Jai Yen) is a phrase you've probably heard if you've been in Thailand for any significant period of time.

When a person says “Jai Yen Yen” to you, they are telling you to keep cool, to calm down, to not get angry and stressed out. The term is also used to tell someone to slow down and that they don't need to hurry.

It is a phrase deeply linked to the way in which Thai society functions, and the way Thais prefer the energy of their environment to be maintained.

Thai culture teaches one to be calm and non-confrontational and that is much better to stay cool and composed.

Indeed, the ability to keep cool in challenging and tense situations is highly admirable in Thai society.

Of course, not every Thai person is this way all of the time, and people naturally lose their rag once in a while.

In fact, it could be said that since Thais spend so much time being calm and cool and keeping a lid on emotions, when they do lose their temper they let off way more steam than you might expect 🙂

That being said, you're likely to see fewer displays of everyday aggression here in Thailand than in your home country. Being such as relaxed society is one of the positive attributes that attracts so many foreigners to live here. 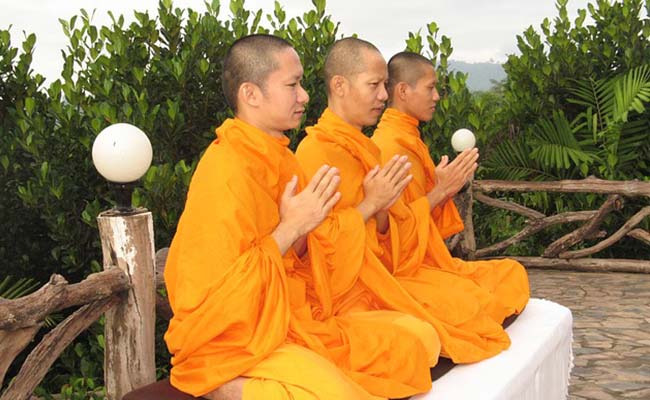 In Thai, Jai Yen Yen is written like this: ใจเย็นๆ

The word Hua Jai means “heart” in Thai, though Jai is commonly coupled with other words to describe an emotion of the heart. For example:

The opposite of Jai Yen is Jai Rawn (sounds more like lawn). This means “hot heart”. You have probably heard the word “rawn” used to describe how hot it is outside, or how hot food is.

A person characterized as Jai Rawn is a person who quickly loses their temper and is easily angered or stressed out. Basically, a hot-headed person.

You will hear the term Jai Yen Yen repeated to a person who is getting heated and seemingly about to escalate a situation beyond an acceptable level.

If you have a Thai partner, you've no doubt been told to “calm down” (Jai Yen Yen) a number of times, which can be a bit annoying when, by your standards, you aren't getting heated at all!

Don't take offense though. As kids, Thais grow up hearing this phrase from their parents and other adults all the time. It's a sign a that a person wants you to avoid a potentially negative outcome by warning you to “take it easy” and “relax”.

When in Thailand, always try to stay calm and polite. If you are overcharged in restaurant, a person stands on your foot in a bar, or a taxi driver takes a wrong turn and made you late for a meeting, take the Mai Bpen Rai (it doesn't matter) approach along with a Jai Yen demeanor – even if it actually does matter a bit.

The problem with getting into a dispute in Thailand is that if a person is clearly in the wrong and feels ashamed or humiliated (loses face), the Jai Yen Yen threshold is easily broken and a temper can quickly boil over into a rage.

Thailand has a laid back culture but the outcome of a dispute has the potential to end up more violent and disproportionate than in the UK, US, Canada, Europe and Australia.

In fact, the worst thing you can do in Thailand is make someone lose face in public, particularly if they've had a few drinks and are feeling more courageous than usual. This is why many of the violent news stories in Thailand are insult and alcohol-related.

So in a dispute, make your point calmly and politely. Don't raise your voice, and try to smile. Try to make the other person feel at ease by telling them it is okay and that a resolution can easily be reached.