You are here: Home / Culture / The Truth About Tipping in Thailand – Where, Why & How Much

Those who've been to the US know tipping is commonplace, an almost expected practice, whereas in the UK it's common but not part of the fabric of society.

When it comes to tipping in Thailand, it's not so straight-forward.

No doubt you'd like to tip something when you eat and drink out, but when and how much? And do tips apply to street food restaurants or just indoor joints? And what about lady bars vs standard bars, what's the deal there.

So let's get into this tipping thing. Starting with how the Thais do it. 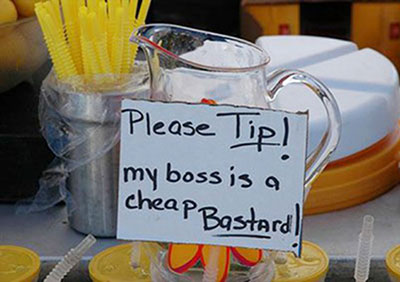 How & When do Thais Tip?

Tipping in Thailand tends to follow some unwritten rules, in that the further up the scale you go (the better the establishment) the more common tipping tends to be.

This makes sense, because those eating at more expensive places are obviously more likely to be able to afford to tip.

But as with all Thai social interactions, there's some unique ‘Thainess' thrown into the mix. So let's explore the approach:

Thais generally don't tip at street food stools. It's simply not the nature of such places.

The bill isn't left on the table in a MasterCard branded wallet, as it would be at a mall restaurant. Oftentimes the deal is done verbally, and any change due is summoned from the cook's apron.

Sometimes they have a person working the tables who writes up a receipt, if the order was a few dishes or more, and you might choose to tip this person.

Of course, occasionally someone might tell the owner to keep the couple of leftover Baht, but with a mixture of clientele, ranging from the Burmese construction working right up to the Lambo-driving entrepreneur, it tends to be a sit-eat-go free-for-all that doesn't lend itself to the etiquette of tipping.

For high street restaurants, I mean chains like Black Canyon and MK, where average middle-earners might eat, a 20-40 Baht tip would be the norm, on say a 300-600 Baht meal.

But not everyone will tip, and most wouldn't necessarily have the intent to do so: it's more a case of receiving the change from the waitress and deciding to just leave it, not least because it looks pretty stingy not too – and in Thailand we love to save a bit of face 🙂

Posh restaurants are a different kettle of fish. There's a point to prove here: “I'm rich enough to eat here, and of course rich enough to leave a tip”.

At these eats, most hi-so Thais would tip, though not necessarily an excessive one. We're talking 100 Baht on a 4,000 Baht meal; though the big players with a big face to upkeep might go in bigger.

You should tip at these restaurants, for sure.

Bars are a little different.

If you're having just one or two drinks then tipping really isn't necessary. But if you're in there a solid few hours and neck a skinful with a mate, then you might choose to tip the bartender, or lady waiting the tables, for putting up with your bad jokes :).

In go-go bars and general “lady bars” the women make a lot of their money through tips, and tips are often shared out. Again, though, if you've only popped in for one beer costing 100 Baht, there isn't much scope to tip and one would question if it's really necessary.

But again, if you're in there having a jolly-up for an hour or more then you should tip those who've given you their time – it's kind of how it works.

But Most Thais I Know Don't Tip!

I know, I know. It's not uncommon to see Thais scooping up every last Baht, as if giving that little offering might enable that waitress from Lampang to start a new business, conquer the Thai economy and rise to the top of the Forbes rich list – Buddha forbid!

But let's keep this balanced, because some foreigners don't tip either. I must admit, I do feel a tad embarrassed when I see a fellow “farang” snatch that 5 Baht from the tray. I guess it depends on whether you've come from a tipping culture.

It's worth noting that the modern tipping culture is something Thailand has inherited from the West, and I would argue it's more a culture of leaving a tip to keep face if you need to.

Besides, a lot of people are on the breadline, and giving away money isn't very wise when you can barely afford to pay your rent and feed your kids.

What there has been historically, however, is a culture of “giving extra” in Thailand.

For example, in a market-style setting, a vendor might choose to give extra fruit to a regular or particularly friendly customer. Conversely, a customer might choose to offer to “keep the change” because they enjoyed the friendly exchange.

To Tip or Not to Tip?

So what should a foreigner do?

Well, let's start by taking a look at the three general lines of thinking that fall among different foreigners when they're in Thailand, and probably in many other countries too. And then I'll cover exactly what I do.

All of these approaches make a fair point, but personally I adopt the third.

I have a good knowledge of what people are paid for different jobs in Thailand, and I know what a massive difference tips can make to restaurant workers.

I tip even when the service is bad.

Why? Because in life I try to always consider what it's like to be in someone else's shoes. I doubt I'd be smiling if I was on my feet 10 hours a day serving meals and drinks in Black Canyon for 160 quid a month.

In fact, most people wouldn't get out of bed for $100 a day, so why would I begrudge giving someone a bit extra to help them pay their rent, take the kids out, send a bit of money to their aging parents, and buy some new shoes to replace the pair they've had for three years.

You get the picture.

I'm not rich by a long shot, but I can afford to tip a little in Thailand, so I do. I enjoy giving people a tip. I also enjoy helping others where I can. It's spiritually rewarding.

I always leave a tip for the maid when I checkout of a hotel, too. This to me is essential. They get paid very low wages and, if they are Burmese most likely less than the Thai maids. We're talking 6-8,000 Baht per month in some areas.

The way I see it, if every guest leaves 100 Baht for the maid (that's less than £2.50, come on people!), and she collects that tip from 5 guests checking out each day, she could make a solid 15k Baht on top of her salary each month.

This would put her salary at say 22K Baht a month; which would mean she'd at least be able to save money each month and treat the kids now and again.

I Can't Afford to Tip!

Some people are living on a shoe-string budget themselves, struggling to make ends meet. So tipping isn't always an option, even if they wanted to.

That being said, the large majority of tourists and expats can afford a small tip of 20 Baht on a 300 Baht meal.

Those who take approach 1 do make a good point though; because if we always tip the waiter regardless of the service, it creates a precedent and becomes an expectation. This will serve (pardon the pun) to keep wages low, as employers will stipulate in job descriptions that employees can expect “generous tips”.

In truth, it isn't up to Joe Public to tip. It is up to employers to properly compensate their workers for the job they are doing, and up to the government to set wages at a sustainable living standard.

I'm not passing any judgment here; everyone's circumstances are different. Whether you leave a tip comes down to whether you can afford to so, and your personal stance on the culture of tipping.

+ Your Next Read: 10 Things You Didn't Know About Thai Culture

So How Much Should I Tip in Thailand?

I've read a few threads on the web over the years where some foreigners curse others for tipping too much. They say it reinforces this whole “farangs are rich” mentality and encourages Thais to think we have bottomless pockets.

And there is some truth in this “farang ATM” theory.

Some uneducated Thais, who haven't been outside of Asia, may have this idea that pall eople from Europe and America are wealthy.

This perhaps comes from watching American films and soap operas, and of course is compounded by those retired expats with big pensions who buy the proverbial “farang castle” in Nakhon nowhere for their Thai wife.

I mean, it makes sense, right? If foreigners are tipping 20% on top of every bill at a street stall and bar, and the average Thai tips nothing, the general perception will be that foreigners have money to burn.

This perception then turns into staff being judgmental of those foreigners who don't tip; “farang keenieow” (stingy foreigner) is the term.

But this is of course unfair, as the shoe -string budget backpacker is less likely to be able to afford to tip on each meal than the 60+ retiree who has a pension and a nice family inheritance to live off.

That said, most people can afford to at least leave a 10-20 Baht tip.

So, if you're stuck for knowing what to tip, follow the Thai culture for tipping as set out above. Don't tip at street stalls unless you really want to show your appreciation, but do leave a tip at high-street eats: I suggest 10 Baht in every 100 Baht, so 40 Baht on a 400 Baht meal.

And, if you like a posh nosh, well, you've got the dosh to flash. So you might as well show some love to the staff, who, by the way, probably earn less in a night than a glass of that fine wine you sipping like water!