You are here: Home / Wildlife / Did It Really Snow in Thailand in 1955? (The Truth Revealed)

As parts of the Western world head into winter and the cold weather sets in, there's one thing on everyone's minds: Will it snow this year?

Unsurprisingly, except for a few chilly mornings in the North, there's no sign of snow in Thailand, yet!

I'll bet my house it won't happen, but…

According to Thailand's national weather archives, it did snow, once!

The only ever official (I use that word loosely) snow recorded in Thailand was in Chiang Rai on 7th January 1955 (see the picture below).

According to the notice on this picture, the snow (sort of) came after rainfall at 6pm.

The event was well documented at the time, and the story has been passed down through generations.

Snow in Thailand: Back in the Winter of 1955

The story goes that after the rain came snow-like-hail, which produced a white blanket of snow on the ground.

You have to admit, the ground does look white and fluffy in that picture.

This “snow” remained for about 14 hours and then melted away.

This story is fiercely contested by snow geeks who say the “snow” was formed by hail and therefore doesn't constitute a proper snowfall.

However, residents beg to differ and boast proudly of their claim to snow fame.

Snow or not, this is as close as you're going to get to it in Thailand, because this is the one and only time “snow” has ever fallen. 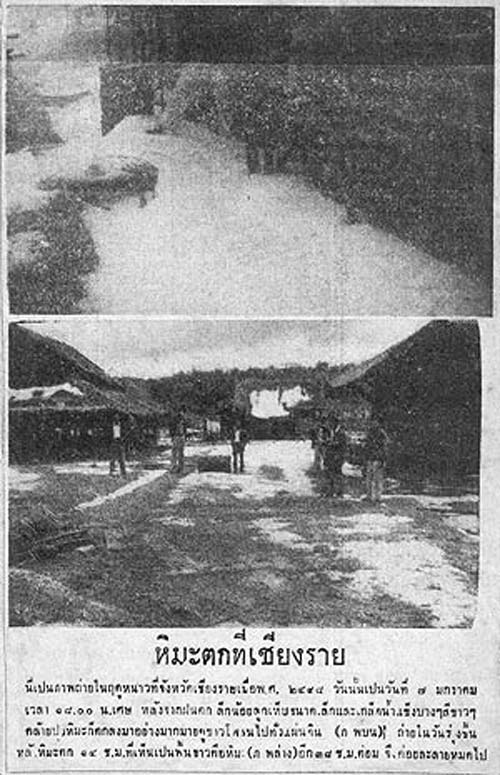 Those who live in the North will know that it does get pretty chilly come December thru February.

The lowest temperature ever recorded in Chiang Rai was 2°C, about 35°F, which is low enough to snow.

Heavy dew is quite common up North and frost on leaves and vegetation in the very high grounds is sometimes reported late in the year.

Bangkok, however, doesn't get that cold by a long shot.

The big mango hit its coldest record in 30 years on January 23rd 2014, when the temperature fell to 15.6°C – basically a warm day in Scotland! but quite a shock for the residents who are used to more like 30°C year-round.

The lowest ever recorded temperature in Bangkok was 9.9°C (49.8 °F) in January 1955, which coincidentally was the same year snow fell in Chiang Rai. So maybe this was snow, after all.