You are here: Home / Learn Thai - Fast / How to Use Kráp and Kâ – the Thai Politeness Particles

Yet despite their apparent simplicity, understanding these words and when you should use them isn't entirely straightforward.

Most people don't know that kráp and kâ do not directly translate to any word in the English language.

They are politeness particles, added to the end of sentences for courtesy and to soften the impact of the sentence.

For example, if I pass by the reception in my hotel, it would be considered a little impolite to simply say sawat-dee (hello/hi). So I would add kráp to the end of the sentence to be polite.

The same goes for bumping into someone accidentally. I wouldn't just say kor toht (sorry/excuse me). It sounds quite abrupt. Kráp/kâ not only adds politeness in this situation, but also adds some sincerity to the apology.

Let's dig a little deeper in the situational usage of these words. 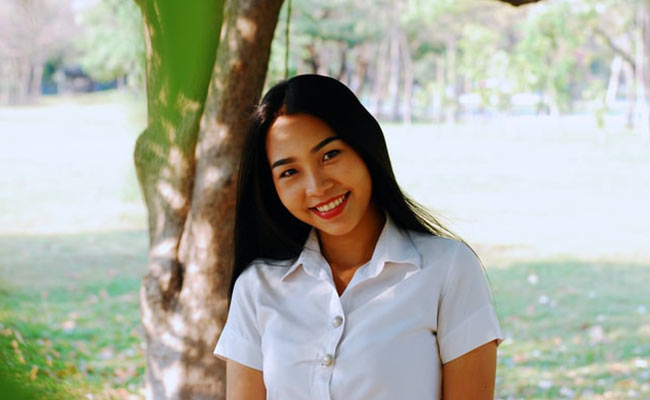 How to Know When to Use Kráp and Kâ

If you want to know when to use kráp/kâ, just ask yourself whether the the same situation back home would require you to show politeness.

For example, let's say you want to know the price of something in a shop. Back home you'd probably say something like; “Excuse me, how much is this please?”.

In this situation, you would add kráp/kâ to the end of your sentence.

For example, in English you would ask; “Where are you going?”

In Thai, most people would informally say “Pai nai”? (go where). Adding the particle at the end softens and sweetens a short, fairly abrupt question.

Consider who you are talking to, too.

If you're speaking to an immigration official or the police, staff at a restaurant or shop, or someone older than you, always use kráp/kâ.

You can also take a cue from the person you are speaking with. If they are using it, you can follow along too.

As a final fallback, if you don't know whether to use it, then say it. It never hurts to be polite.

Note that you can also translate kráp in English with an h, like khráp. But for the purpose of this article I am using kráp because it's a common transliteration.

When to Stop Saying Kráp and Kâ

When meeting a friend for dinner, once you have said hello, how are you, and are you hungry? you don't need to carry on saying kráp/kâ after every sentence throughout the meal.

It's true that some Thai people do this, particularly some women. But you find this more so in Bangkok than elsewhere and, when used excessively, even Thais will note it sounds a tad false and pretentious.

However, in the same setting, if you were to gesture to the waitress and ask her where the toilet is, you would certainly use the kráp/kâ particle.

When Speaking with Your Partner

You may be thinking that there are times you hear your partner speak with a friend or acquaintance, or even with you, and he/she doesn't use this particle.

This is sometimes the case.

Thais know other ways of displaying politeness without needing to use kráp/kâ.

For example, your girlfriend might see a friend and say Pai nai (iiii). She might sustain the last syllables of the word to add cuteness to the question. This negates the need for her to say kâ, because the person knows she is being playful.

Similarly, you might come through the door after work and she greets you with sawat-dee (eee), holding the e in the same way.

In another situation she may use a higher pitch of voice – accompanied by a funny face – to indicate playfulness, and as such drop the kráp/kâ.

The longer you hang around with Thais, the more you will witness these nuances.

Why Does My Girlfriend Say ‘Kráp' Sometimes?

You will come across this too. My wife does it often, especially when I'm moaning at her.

She'll acknowledge what I'm saying by replying kráp, kráp, kráp…It's almost like she is saying yes, yes, yes – which, in a way, she is. See the next section.

Similarly, when speaking to male children in a playful way, you'll often hear adult females using kráp instead of kâ.

Using Kráp/Kâ Instead of “Yes” / “I Understand”

As noted above, you can use kráp/kâ to acknowledge you understand someone in a similar way to how we might use ah-hah/mmm/yes in English; though this is more polite.

It might be that you're in a business meeting explaining something, and the Thai you're speaking with is nodding along saying kráp, kráp, kráp.

You might be complaining to the receptionist at the hotel, and she occasionally interjects with kâ to indicate that she understands your situation.

It's pretty simple: Thai men drop the ‘r' in everyday informal conversations, and the a is often pronounced like a u.

You can just roll with Kop khun kup, though learning to roll that r will come in handy for your Thai later down the line.

Furthermore, the pronunciation of kâ is traditional quite blunt. But in the modern day it is often exaggerated with an ah sound – kââh!

How to Write Kráp and kâ

Kráp is used by men and is written in Thai like this: ครับ

Kâ is used by women and written in Thai like this: ค่ะ

The Complexities of Thai Politeness

Being polite in Thai is actually pretty complex.

There are levels of speech for different occasions and persons of different status.

For example, you use different language to address monks and the royal family.

Don't worry too much about this for now, but it's good to be aware of these different words for different situation as you continue learning Thai.

I hope you found this helpful. If you have any questions, please leave them in the comments section.

Learn a bunch of easy words and sentences here.

Check out these 10 interesting cultural facts.