You are here: Home / Travel / Khon Kaen: How to Get There, Things to Do, Where to Stay, & More

Located 450km northeast of Bangkok, the province of Khon Kaen is considered one of the big four (cities) of Isan.

Its humble beginnings date back to the 12th century when the Khmer empire expanded its territory across the northeast of Thailand, creating numerous towns and cities.

In the modern day it boasts the largest university in the region, an airport, the television studios of Channels 5 and 11, a handful of upscale hotels, and a modest nightlife.

Laos and Vietnam also have consulates in Khon Kaen, which means it's a popular stop for visa applications, too.

Khon Kaen, like Udon Thani, is also home to many expats who have chosen to settle for a more rural life over one in the big mango or on one of the islands. 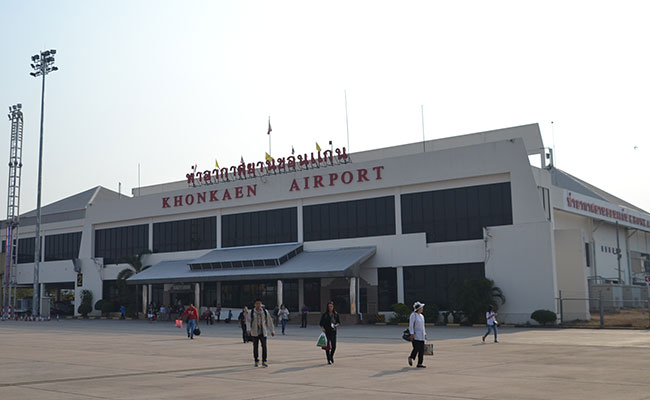 How to Get to Khon Kaen

Air Asia, Nok Air, and Lion Air run daily trips from Bangkok to Khon Kaen. Deals under 1,000 Baht can be found if you book in advance.

Other domestic airports that fly to Khon Kaen are Chiang Mai (CNX), Pattaya (UTP), and Phuket.

From the airport, the town is a 10-15 minute ride to the east. Taking a metered taxi will just cost less than 100 Baht.

The city can get a little congested, particularly when the schools empty out, so expect a longer journey between 3 and 6pm.

The train trip to Khon Kaen starts from the Hua Lamphong Railway Station in Bangkok. You can choose from four daily departures sprinkled through the day.

Some trains offer first and second-class seats as well as tickets for first-class sleeper cabins.

Since the trip takes about 9 hours from Bangkok to Khon Kaen, it might be worth taking the overnight train.

There are three bus terminals in Khon Kaen, but using them is slightly confusing, so pay attention here:

The hot season lasts for 2 months, from March to May, with an average daily high temperature above 94°F.

The cool season lasts for 3 months, from November to January, with an average daily high temperature below 87°F.

Don't be mistaken though, given its tropical climate, the weather is pretty much always hot in Khon Kaen.

The months of August and September tend to see the most rain.

Top 10 Things to Do in Khon Kaen

Most foreign folk are unimpressed with a town in Thailand unless it has a big nightlife scene and plenty of water holes. But open your mind, folks.

No matter where I end up in Nakhon Nowhere, I always find something worth seeing, even if it's just a ride along a dusty road in the back of a pick-up truck as the sun goes down. 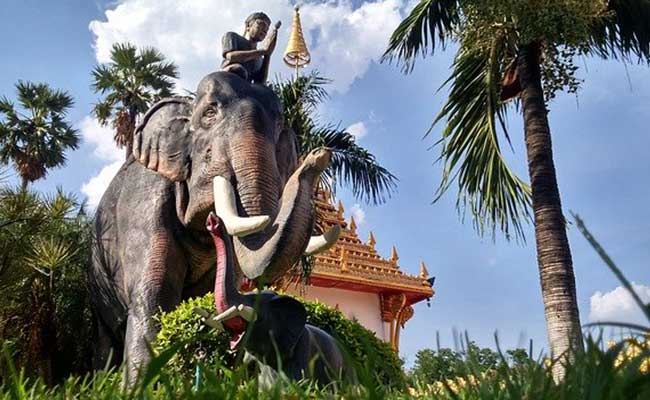 Phra Mahathat Kaen Nakhon, or the ‘The Great Buddha's Relics', is a nine-story royal temple that is home to the Buddha’s relics (obviously) and Buddhist scriptures.

Each floor has door panels and windows laden with carvings that portray Jataka stories and the Buddha’s life.

The first eight floors contain exquisite halls and ancient objects. The top floor, the ninth story of the stupa, offers a majestic view of the town.

The Wat Thung Setthi near Mueang District veers away from the usual red and gold accents of Thai temples and instead uses gold and blue.

The site is said to be the converging point of heaven, earth, and the underworld.

The major attraction in the temple grounds is the Maha Rattana Chedi Sri Trai Loka Dhatu, which contains a relic of the Buddha.

Wat Chai Si Temple in Sawathi is a historically and archaeologically important temple renowned for its mural paintings.

The paintings, known as Hup Taem, depict the life of the Buddha as well as local culture and traditions. These are housed in a Sim or Ubosot, which is considered a holy room.

Something for the kids, Dino Water Park is situated on Tambon Mueang Kao.

Open 7 days a week, the park offers 12 big slides and a swimming pool with a wave machine, all centered around a dinosaur theme.

There is a shallow children's pool and beach-like areas for relaxation.

Go all inclusive for 600 Baht, or pay just 200 Baht for just the swimming pool and children's pool.

This national park features a limestone mountain range that spans the provinces of Loei and Khon Kaen.

The abundant forestland envelopes caves, cliffs, and waterfall maintains that cool the temperature of the area for much of the year.

Some of the most notable caves in the area are Tham Klang Khao, Tham Phra, and Tham Pu Ta Lo.

Known before as the Phong Neeb Dam, Ubol Ratana Dam in Kok Soong sub-district is not only used for preventing floods and generating electricity but also as a means of livelihood for agriculture.

The surrounding area is awash with restaurants and lodging, and you can participate in activities such as a boat ride, a round of golf, and visiting a dinosaur-inspired garden. 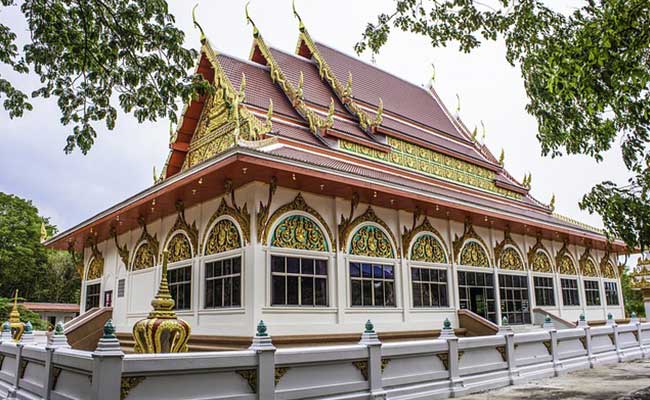 A temple in Ubolratana, Khon Kaen, near the lake.

Situated along the reservoir of Ubol Ratana Dam, Hat Sawan Beach is famous among locals.

It is the perfect place to hang out to enjoy a scenic view while having a meal in a floating bamboo restaurant.

During the wet season, you can swim, hire floats, and ride a banana boat.

A few trails are also available if you’d like to go trekking.

The Phu Wiang Fossil Research Centre and Dinosaur Museum in Wiang Kao District is divided into three zones for service, education, and exhibition.

The museum provides information not just on geology but also provides a detailed background on the dinosaurs that lived in Thailand – based on excavated fossils.

It's pretty interesting, but not as good as the dinasaur museum in Kalasin, which is 1.5 hours away.

The Ton Tann Green Market in the Mueang Khon Kaen District is a hybrid mall-market home to cafes and local boutiques.

The garden-themed area is full of trees, which offers a relaxing atmosphere and some shade.

The outdoor market is open daily from 4 pm to 11 pm, where you will find locally made handicrafts.

Parking space is aplenty and can accommodates over 1,500 cars.

A popular place for locals to exercise, Bueng Kaen Nakhon Lake provides a scenic break from the concrete of the city.

There's a bunch of restaurants there too, if you're peckish.

The Dok Khun Siang Khaen Songkran Festival is held every year from April 13 to 15 near Kaen Nakhon Lake, on Si Chan Road.

Aside from the water splashing, other activities involved include donating food to monks, the ritual bathing of Buddha imagaes, enjoying Isan folk music, and eating lots of food and drinking lots of alcohol.

The Phra That Kham Kaen chedi is located on the grounds of the Wat Chetiyaphum temple.

The fair is held annually on the full moon of the sixth lunar month.

Phra That Kham Kaen is a revered chedi for local people because it is believed to contain relics of the Buddha. Khon Kaen (the town) derives its name from the chedi, which is depicted on the provincial emblem.

At the fair, local people make merit and pay homage to the chedi. Several cultural and musical performances are held around the grounds. 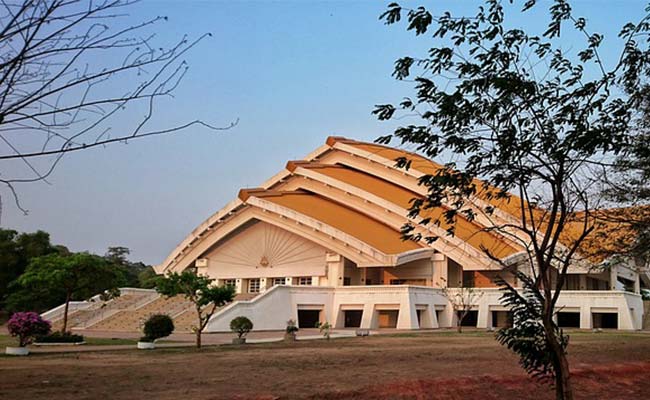 The impressive Khon Kaen university. Stop by for a look if you get the chance.

How to Get Around the City

Getting around is pretty easy.

Taxis are often parked at bus stations, the airport, and at the Central Plaza.

If you go with this option, you will want to make sure that the meter is switched on when you get in so that you won’t be ripped off.

Taxis found in bus stations normally don’t have the meter turned on.

If you don’t want to take a taxi, you can take a tuk-tuk.

Tuk-tuk rates aren’t fixed and mostly depend on the distance, with short rides starting at around 50 Baht and long rides outside the city limits costing 100 Baht+.

Having good negotiation skills will come in handy, as tuk-tuks all over Thailand will try it on with new visitors.

Within the city center, short rides will cost 20 Baht or so, and 50-70 Baht for rides across town.

Outlets for renting a car can be found at the airport and around the city centre.

Car-hire companies like ‘Thai Rent a Car’ and ‘Budget’ have outlets at the airport.

The Khon Kaen City Bus (15B) is available 24 hours a day. Its route starts from Bus Terminal 3 and goes around the city via Central Plaza. Some buses head out towards the airport.

The cheapest means of transport is a red shared taxi called a songthaew. It's like a mini open air pickup truck.

It costs around 10 Baht per ride, but is slow and takes a while to get to your destination due to the number of people jumping on and off.

The downside of a songthaew is that the driver is unlikely to speak any English. However, try these popular routes that pass by tourist destinations:

Khon Kaen has plenty of accommodation for visitors, though only a handful of very nice hotels.

The following three are top-tier hotels located in the heart of the city.

Aside from their sleek interiors and impressive amenities, these hotels stand out because the staff speaks good English.

This five-star hotel located on Prachasamosorn Road boasts 196 rooms and suites and nine restaurants and bars.

The hotel has earned rave reviews from guests across different travel websites and I can vouch for them. I stayed here for a few days last year and was very impressed.

It has a gym and swimming pool and the grounds are really pleasant. The room was super quiet too. If you have kids, do mind the busy main road outside.

Aside from its luxurious rooms and suites, Pullman takes its pride in its pool terrace, skylight lounge, and restaurant that serves international cuisine.

This five star hotel is situated 3 km from the Khon Kaen National Museum and 8 km from Khon Kaen Airport.

Like the Avani and the Pullman, this four-star boutique hotel is located on the main Prachasamran Road, making access to anywhere locally a breeze. It has 72 rooms, each with a unique theme that will make for a refreshing stay (pun intended).

Khon Kaen isn't somewhere I'd waste a week or even 3 days of a holiday in Thailand – I'd rather be on the beach down south.

But if you know someone who lives there or you get the opportunity to go for any other reason, it's worth it.

If you want streets of beer bars and scantily clad hostesses, forget it. There are bars and a handful of clubs, but this is a student town and most of the nightlife is geared towards Thai students and not foreigners.

Like anywhere in Thailand, it's cool to hangout and there's a bunch of stuff to see. That said, the city itself isn't architecturally impressive and is nothing much to write home about.

Still, this is Thailand, and something interesting always happens…wherever you go.

Travel insurance is a must. I never travel without it. I’ve been using World Nomads for 15 years.

Find a cheap flight to Thailand using Momondo. This is my go-to comparison site.

Going to Kalasin via Khon Kaen?

You could stay here.