However, you might be surprised to find out that Thailand has a formidable year-round race circuit that provides races through both urban and rural landscapes.

If you're a keen runner wanting to squeeze in a race while on holiday in the Land of Smiles, you'll find this guide super useful.

And if a Marathon sounds like a few miles too far and you prefer a smaller run like a 5 or 10k, all the events in this guide offer smaller runs for those who don't want heatstroke or exhaustion!

Please note: I haven't included race entry fees because fees change from year to year. However, pricing is usually quite inexpensive. Expect to pay about 800 Baht for a marathon, 600 Baht for a half marathon, and 400 Baht for a 5 or 10 km race. 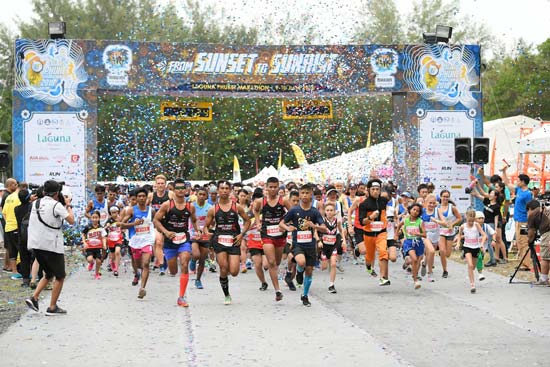 At the start line of the Laguna Marathon in Phuket.

This event gives you the opportunity not only to participate in a fitness-oriented race but also to marvel at historical landmarks and local attractions as you breeze on by.

The Khon Kaen International Marathon has four running divisions: the 42.195 km marathon, the 21.10 km half marathon, the 11.55 km mini-marathon, and the no-age-limit 4.5 km walk and fun run.

Looking for a hotel to rest up in the day before and after the race, check out the AVANI Khon Kaen. I've stayed there before; it's awesome.

The Chombueng Marathon was initiated in 1985 and is considered one of the oldest marathons in Thailand. It takes place in the third week of January at Muban Chombueng Rajabhat University.

Interested runners can opt to join the Marathon, half marathon, and mini-marathon (10 km). Bear in mind that the event is flocked by almost 10,000 local and global runners every year, thus a lottery system is implemented when the entrant numbers exceed capacity.

The Surat Thani Marathon was devised to place a local emphasis on healthy lifestyle through exercise. Held during the middle of February, the event attracts tourists and locals alike.

The marathon starts from the Si Surat Bridge, near the Don Bird Town Hall.  A variety of runs are offered for different ability levels: 3.5 km, 10.5 km, and 42.195 km.

The Buriram Marathon was devised to promote the city as “Thailand's Sports City Center”. The idea was conceptualised by the executive of Chang International Circuit, Mr. Newin Chidchob, who is also the President of Buriram United football club.

The Chang International Circuit is where the event begins, followed by a flat course and some foothills. Runners get to enjoy the views of the i-mobile Stadium, the Town Hall and the King Rama I Monument before they reach the finish line in front of Buriram Castle.

Entrants can run a marathon, half marathon, 10k or 7k run.

The Chiang Mai University Marathon attracts the highest number of foreign runners of all the marathons in Thailand. Known for its Lanna culture and historical landmarks, the event enables tourists to see the city in a unique way.

Users can run a full or half marathon or a 10 km mini-marathon, with cash prizes and medals up for grabs. Young runners can also enjoy the event through the 3 km smile run and kids run. It is also worth noting that the route of the race is flat, with no elevation.

Nothing to see here. The race schedule goes quiet in March, for some reason, perhaps because preparations for Songkran are in full effect.

The race is held in Bangkok and starts at 8 AM. Divided into two events: you can cover 17 laps of Lumpini Park, or do a relay as part of a four-man team doing the same thing.

In 2018, the fun run was held in  June at the Kulim BBB Hillpark. The event was non-competitive and featured music stations at every stop, while the participants get splashed with water – adding an element of fun to the mix.

The marathon divisions cover a wide range of age groups and Thai locals and tourists are free to enjoy running around various landmarks.

This race is hailed as South East Asia’s largest marathon and the events sell out fast. This year, a record-breaking 9,000 runners attended the 13th Laguna Phuket Marathon.

The full marathon boasts views of plantations and local villages and is a huge hit among running enthusiasts.

The 14th edition, which has been limited to only 10,000 participants, will be held next year on June 8th and 9th; registration is currently ongoing. Races on offer are 2 km (for kids), 5 km, 10.5 km,  a half marathon and full marathon, including a relay option.

This marathon takes place at Sukhothai Historical Park, 12 km away from the provincial city. The park covers the area of the Sukhothai Kingdom, which is now a famous UNESCO World Heritage site. Sukhothai used to be Thailand’s first capital city before it was replaced by Ayutthaya.

This year’s marathon was held on the 24th of June, with activities such as the mini-light and sound show held the day before. With unlimited food and drink on offer, you certainly won't starve.

If you can brave the heat, this is a unique way to see some of Thailand's most treasured relics. 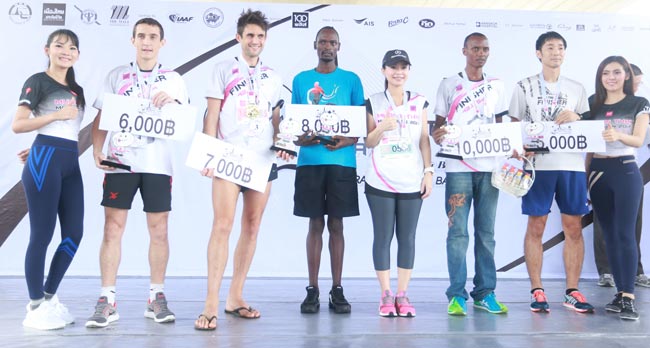 Winners at the Muang Thai Marathon in Bangkok.

The southern province of Nakhon Si Thammarat hosts the Gulf of Thailand championship every July.

The marathon was devised by the Provincial Office of Tourism and Sports to promote the local provinces that sit along the Gulf of Thailand, namely, Chumphon, Surat Thani, Nakhon Si Thammarat, and Phattalung, all of which are blessed with breath-taking beaches.

The Pattaya International Marathon  began in 1992. Located on the eastern Gulf coast, the tourist city, or Sin city,  as some like to call it,  is a hugely popular tourist destination.

Five races are offered: a student runoff 5 km, a quarter marathon of 10.55 km, a half marathon, a full marathon and a wheelchair marathon, both at 42.195 km.

From students and the physically impaired to beered-up “farangs”, this is arguably the most inclusive marathon in Thailand, and  one where you are most likely to see foreign tourists passed out halfway through and being carted off to the aid station 🙂

This event is not as ostentatious as some of the aforementioned races,  but if you're looking for a slightly lower key race and an interesting alternative place to visit, Chai Mongkol could be for you.

The race venue is Wat Nuam Kanom, a temple in Samut Sakhon Province, one of the central provinces of Thailand. There are five races to choose from: 5 km, 10 km, half marathon, and marathon.

This race in Nakhon Si Thammarat is typically held in September, but its 2018 edition was held on August 26th –  so do check the dates quite some time beforehand.

Khanom is famed for its tranquil beaches and is popular with tourists who are in the know. It is worth taking part in this marathon just so that you can visit spots such as Nai Plao Beach.

There are four distances available: 5 km, 10 km, half marathon, and marathon. This is a charming race with great scenery. It is becoming increasingly popular each year and it is therefore advisable that you book up early.

one hour boat trip from Khanom  on the mainland,  the marathon is just one of the many exciting activities that take place during the Ko Samui Festival. The festival celebrates the establishment of the island, which is  hugely popular with all types of traveller, from the backpacker to the high-end tourist.

Just like most of the marathons in Thailand, there are additional races for those who don't want to run a full marathon. There's a fun run of 5 km and a mini-marathon of 10.5 km. Meanwhile, the trail category runs a distance of 30 km.

This Bangkok race is car-free road running,  which will require a novelty for anyone who lives in a bustling city. The race starts on the Rama 8 Bridge and makes its way through the elevated Borommaratchachonnani Rd.

Entrants can choose from the 5K smile run, a 10.5k run and half and full marathons.

Finishers of the full marathon get a T-shirt, and everyone who takes part in a race gets a medal, bag of goodies and free food.

This event is famed for its trail through the foothills of Khao Yai National Park, the oldest and most visited reserve in Thailand. Trails run at 3.5 km, 10 km, 21 km, and 42 km.

The flat race course may look easy to traverse, but it also covers a lot of different terrain.

The views of the tropical landscape are enthralling, as are the opportunities to happen upon exotic birds, monkeys and other animals that live freely in the national park.

The Khao Yai Marathon philosophy is a “green and friendly run”. The organizers go to lengths to ensure that the races don’t have adverse effects on the environment. As an example, water stations contain only paper cups to avoid contributing to plastic waste that may end up polluting the environment.

Chanthaburi is a province in southeast Thailand, fringing the Gulf of Thailand and known for gem dealing and tropical fruit.

As its name suggests, this event’s full marathon is quite a challenge for participants, as runs take you along hills, beaches and lakes.

Divisions include the following: 5 km micro marathon, 10.55 km mini-marathon, half marathon, and full marathon. The walk and run event is open to people of all ages.

Rayong needs little introduction. It is home to national parks and magnificent beaches has no problem attracting a steady stream of tourists.

The marathon presents an excuse to put your Singha beer down for a few hours and get out of your deckchair for some serious exercise.; though I'd go for the fun run if you're not a seasoned runner.

In addition to the 3 km fun run, there is a mini-marathon of 10 km,  half marathon and a full marathon.

The event is managed by the Rayong Marathon Health Running Club, with sponsorship from the likes of PTT Global Chemical, a company keen to ensure that the seas and beaches of Thailand retain their natural beauty (ahem –  no sarcasm intended).

Say farewell to 2018 with this December marathon. Due to its location, this is likely to be the marathon with the coolest temperature in Thailand.

Chang Mai can get quite cool in the months of December to February.   as you run around the “Chiang Mai Moat”, you'll be surrounded by artful Lanna temples and the backdrop of Doi Suthep,  one of Thailand's most sacred places of worship.

The race options are the same as those for the Muang Thai Bangkok race: A 5 km smile run, 10 km, and half and full marathons.

Ayutthaya, known as Thailand's ancient capital, is rich with cultural heritage, as portrayed in its local handicraft, arts, food and historical remains.

The venue for the start of the race is Ayutthaya Historical Park, the epitome of history and culture. On offer is a fun run fit for kids and the not so fit, and distances ranging from 10 km to a full marathon for the seasoned runner.

Taking place in Phrae, one of the northern provinces of Thailand, this run is nothing short of magical.

The race commences in the dark along roads illuminated by candle light. The race begins at Phrae Provincial Administration Organisation Sports Stadium, as you wind through the town by 4 AM to see the beauty of twinkling lights unfold.

In addition to a half marathon and a full marathon, there's a 5 km run called the Walk/Run For Health.