You are here: Home / Culture / Are Thai People Really Lazy?

“Well, you know Thais, they're f-word lazy, man”, said the expat on the adjacent table in the coffee shop.

This is a statement I've heard many times over the years.

It's an easy thing to say off the cuff, particularly if that has been your experience.

But that experience is usually very limited: limited to a lazy girlfriend you adopted into your home, a lazy laborer you employed cheaply to fix your roof, or a lazy mother-in-law who thinks you're not good enough for her daughter – despite the fact that you paid for her house.

In reality it's a sweeping generalization that isn't applicable to the millions of Thais who work hard every day, for what is often a pitiful wage.

But is there some truth to this generalization? I mean, there's no smoke without fire, right? Why do people keep saying it? Why has this label been stuck on the Thai people?

This perception of laziness is coming from somewhere, and it seems to be the experience of quite a large number of expats.

I'll share my experience and thoughts on this stereotype below, and then you can give me your take in the comments section. 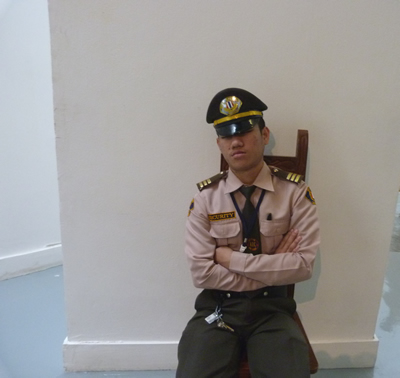 I snapped this security guard at BACC asleep on the job. Lazy or just bored senseless!

Since I came to Thailand, some 14 years ago, I have to say that the majority of Thais I have encountered are pretty hard-working.

From the maid to the market trader to the Som Tum seller to the lady serving coffee in Starbucks, most of the Thais I see on a daily basis are working a lot of hours.

Most are up at the crack of dawn, many working 6 or 7 days a week, particularly those with their own businesses.

The guys and gals in the local 7-Eleven seldom have a day off, taxi drivers sleep just a few hours in their taxis before hitting the road again, and go up country and you have OAPs toiling the fields for 8 hours a day.

So where are all the lazy people?

Some might say, “But that's out of necessity, not because they want to. Given the chance, they'd put their feet up and live off someone else's labour”.

But how many people around the world don't work out of necessity? And how many wouldn't take it easier if they could?

I will concede that most Thais have no choice but to work. There is no comparable social security system. If you don't work, you don't eat. Simple.

Is It a Class Issue?

Even in the middle classes I see little evidence of this stereotype.

For example, the experiences I've had with Thai colleagues at my friend's Bangkok-based company is comparable to that of staff in the UK. Most work very hard. Sre, some are keener than others, some work faster than others, and some are more organized than others.

This is no different to any other office around the world.

You have a very wealthy upper class in Thailand, and I'd argue that that's where you're more likely to find laziness.

The sons and daughters (some) of rich Bangkok businessmen tend to do little more than drive flash cars and do lunch with friends.

But again, that's the same all over the world, isn't it?

So who are we talking about being lazy here?

Bar girls that sit around of an evening, occasionally playing pool and waiting to be bought a drink and taken home? The privileged wives of pension-rich expats who don't need to work?

These groups don't represent all Thai people. This is a minority.

The “Sabai Sabai” Approach to Life

Perhaps Thais don't work as efficiently as Brits, Aussies, Americans or Europeans, and perhaps that gives a perception of laziness. A lack of efficiency, taking longer to do things, a seemingly reluctant attitude at times, this could be perceived as laziness.

But the latter, in most cases, is because they are doing a boring job for little money, with no real career prospects.

It's also horribly hot in Thailand; the humidity makes you feel sweaty and tired. If you're working outside, you're not going to be over the moon about the sun beating down on you all day.

Or is the case that Thais will cut corners if they can, knock off early if no one is looking, and take the easy way out if possible?

I can attest to this being the case in some people I know and in some dealings I've had in Thailand, but part of me feels this is cultural – the “sabai sabai” (comfortable) approach to life, mixed with a little “mai bpen rai” (never mind).

But then aren't we all aiming for this to some degree?

We'd all like to earn the most we can doing as little work as possible, unless we truly love our work and would do it despite the money.

Is It a Penchant for Laziness?

Or maybe the difference is in the what you'd do if you weren't working.

Is it the case that us expats spend our free time getting things done: tidying out the garage, washing the car, learning the guitar, playing golf, etc. Whereas the Thai would rather just sit down and watch a drama series and eat snacks.

I don't know where you're from, but in the UK, generally speaking, we are a nation of doers. We keep busy: “Don't put off until tomorrow what you can do today”. Of course there are many who aren't like that, and in my opinion this culture is changing.

Look, I am a pretty productive person, I don't like idly sitting around wasting time. But that doesn't make other people lazy. It's my personality. Maybe I need to relax more…

The Problem with Generalizations

For every Thai person I could label as “lazy” there's three I know who are the complete opposite.

My grand-mother-in-law is 90 and still gets up at the crack of dawn to go into town to buy vegetables to sell at a local market. Even with Covid lurking there was no keeping her down. She could never be labelled as “lazy”.

Then I think about the Thai wives of expats I know who moved to Europe. Surely these are lazy Thai women who, as soon as they got the chance, put their feet up and sponged off their husbands!

Well, no. There are three couples I know very well. All three wives work in their adopted country. Their husbands could support them, but they choose to work and earn their own money instead.

I do know the stereotype, though.

I know of one guy's partner who doesn't work yet insists on having a maid and a nanny, when clearly she could fill these roles. She prefers to adopt the hi-so life, immersed in fashion and selfies. But man, this isn't exclusive to Thailand, this is happening the world over.

And this is the problem with generalizations; it really depends on your experience, on your interactions, on your social circle.

The reality is, however, that most Thais don't have the privilege of being lazy. Period.

Do they have more of a penchant for laziness than us western expats? Maybe… You tell me.