Every language has proverbs, and these are usually translations or variations of those found in other languages and cultures.  In fact, proverbs are quite universal in that way.

Proverbs are handed down through generations – almost like folklore. They use metaphorical language to express a perceived truth based on a generalization or life experience.

I've found Thai proverbs to be quite useful. Often a proverb provides a simple way of explaining a situation that might otherwise hit the language barrier.

So hopefully you'll find this list useful when speaking to your Thai partner or friends. 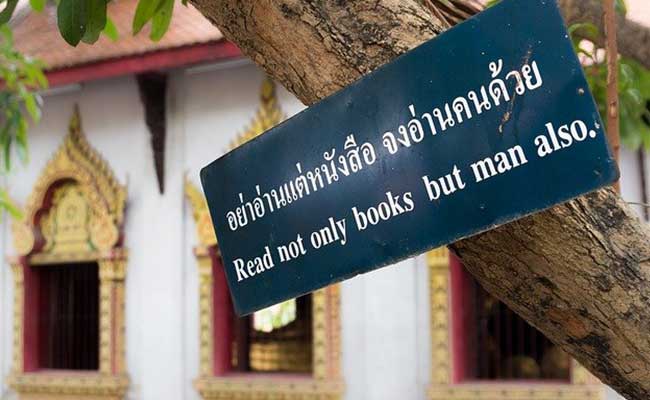 1. When the cat's away, the mice will play

This is a common English saying, meaning that one can do as they like in the absence of authority / a watchful eye.

When literally translated, the Thai version is a little different:

2. Out of the frying pan into the fire

Again, a common English phrase that means to escape one problem only to encounter something worse.

The Thai version uses a tiger and a crocodile to illustrate this:

If you're married your wife has probably said this to you numerous times :). It's a classic and is said to someone who doesn't listen.

The Thais have a very unique way of saying this.

4. You can't have your cake and eat it

A favorite of mine, this proverb applies to a situation where there are two options but you can't have both, or, more loosely, that you can only have it so good, and can't have it all.

The Thai version of this is:

I've heard this used to refer to a “playboy”: a man who has a wife but carries on with other women.

5. Every cloud has a silver lining

If you're from the UK like me, you certainly grew up with this one. It means that every negative circumstance has a comforting or more hopeful aspect, even though this may not be immediately apparent.

The Thai version of this is a little different in that it simply suggests everything balances itself out, the good and the bad.

6. Calling a spade a spade

This old-fashioned saying means to speak frankly, to describe something as it truly is, even if it may cause offense. The Thai version is more poetic in nature:

* Despite being a harmless gardening tool, it should be noted that in the mid 1920s the word spade emerged among the African American community as a reference to a black person. This further evolved into, among others, a racist word. Therefore, some people refrain from using this proverb to avoid any confusion and subsequent offense.

7. A bad workman blames his tools

Something we've all been guilty of, especially those of use who are terrible at DIY. This proverb means that someone who has done something badly will seek to lay the blame on their equipment rather than admit their own lack of competence.

I really like the Thai version of this one, as it uses music to create the metaphor:

8. Make hay while the sun shines

My mum always used to say this to us kids as we were growing up. It means to make the most of a favorable situation while it lasts. If you have an opportunity to do something, do it before that opportunity disappears.

This reminds me of another of my favorite proverbs: don't put off until tomorrow what you can do today.

The Thai version of ‘make hay while the sun shines is':

I'm not sure what the English equivalent for this is; though I'm sure there's one.

The act of putting gold leaves on a Buddha image is primarily to honor Buddha's teachings, though in Thailand it is also a form of making merit, which makes the proverb a tad hypocritical, perhaps?

10. You can’t make an omelette without breaking any eggs

I'd actually never heard this proverb before but it applies when you have to go through something difficult for a good result, or to experience hardship to gain a desirable outcome.

The Thai version is nice and concise:

11. Prevention is better than cure

Commonly heard in the West, this quite obviously means that it's easier to stop something happening in the first place than to repair the damage after it has happened. This translates exactly the same in Thai:

* Note that a similar saying in English, attributed to Benjamin Franklin, is: An ounce of prevention is better than a pound of cure

The Thai version is actually more like the proverb “the apple doesn't fall far from the tree”, and makes good use of metaphor:

Got a Thai proverb to add to the list? Leave it in the comments section below.

Learning conversational Thai is easier than you think. I use Thaipod101. It is free to get started.

What is the Cost of Retiring in Thailand?:

Find out how it stacks up against the rest of the world. Click here.