In Thailand things are often done a little differently, to say the least. Thus the saying, “This is Thailand”, commonly abbreviated to TIT.

Close your eyes and picture a market: Imagine the chatter of the vendors, the array of fresh produce, the busyness of the visiting crowds, the hot sun and scents and sounds.

Now imagine being startled by a train horn. You look up to see a train snaking its way through the market and heading your way!

Yep, every few hours a train makes its way right through the market. I mean, it could literally take your toes off. It's that close.

It really is a sight to behold, and one worth experiencing.

As soon as vendors hear the whistle of the train, they quickly and strategically move their goods off and away from the track.

Sellers, shoppers, and visitors then retreat until a large, yellow-and-red-hued locomotive makes its way through the chaos.

Maeklong Market is certainly one for your bucket list.

Here's a short history on the market, how to get there, what to expect, and how to make the most of your visit.

The Maeklong Railway: A Short History

It is one of the slowest railways in Thailand, with an average speed of 30 Km/hr. There are no signals on the line, either.

Commissioned in 1901, the Maeklong Railway was initially a goods line with 8 stops. The train transported produce and fish to the famous markets of Bangkok.

After a number of changes over the years, it was brought under the control of the State Railway of Thailand in 1952 (1).

The railway became a novelty tourist destination for its unique path through the Maeklong Railway Market (founded in 1905).

Known to locals as the “umbrella pull-down” market, or Siang Tai  (“life-risking”) market, vendors regularly shift their goods, shop fronts, and awnings out of the way of passing trains.

What to Expect at Maeklong

As with many Thai markets, Maeklong is very busy in the early morning. Thailand is naturally cooler earlier in the day, so setting up shop and trading goods is far more pleasant before the sun is up.

There's some cover in the market but not everywhere, so you might be better to visit early in the day too, or on an overcast day. Either way, carry your sunscreen.

Don't worry about getting run over by the train. It looks more dangerous in the pictures than it is in real life.

As the train approaches the stretch that cuts through the market, a warning bell is sounded and magnified by the market’s sound system. The train also slows down.

This warning will prompt a flurry of activity, as vendors move their produce out of the way and pull back the awnings of their little store fronts.

The train lets out a loud beep as it approaches a bend, so you'll know when to get out of the way. If you heed the warning bell, there will be more than enough time to move.

Try to be respectful of space. Try not to jostle anyone in your efforts to give the moving train a wide berth while simultaneously snapping pictures. 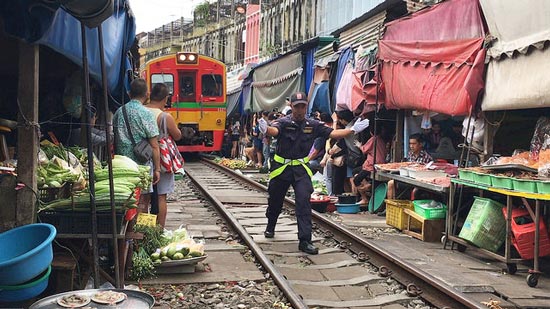 “I hear the train a coming, it's rolling round the bend”. Image credit: Dennis Grice

With plenty of fresh fruits and vegetables and spices and Thai treats, the Maeklong Railway Market is a foodie’s paradise. There's also some clothes shops and other bits and bobs, as you've no doubt come to expect from a Thai market.

If you’ve got a place to cook dinner, you can buy fresh goods for your evening meal. If not, enjoy the Thai fruit. You'll find all the usual suspects here from pomelo to jackfruit and watermelon to durian.

Go easy on the durian though. It's an acquired taste, so buy a small portion to try first. Also bear in mind that most hotels don't allow durian in the rooms, as it creates a pungent smell.

If you’ve got a sweet tooth, you'll enjoy the Thai desserts and homemade ice cream, coconut in particular.

There's a bunch of small restaurants too. I'm sure I don't need to tell you that in Thailand you can always find something to eat for a very reasonable price. 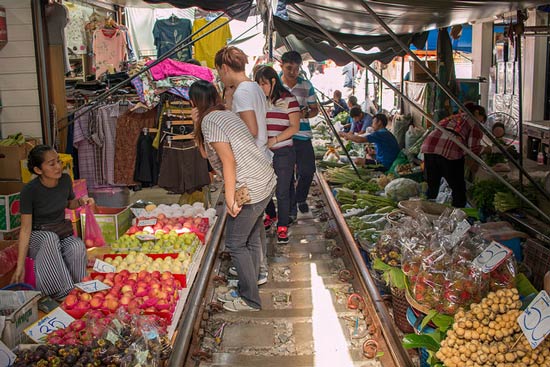 How to Get to Maeklong Railway Market

Located approximately 80 kilometers outside of Bangkok, there are a number of ways to get to the Maeklong Railway Market.

Perhaps the most common tourist route from Bangkok to Samut Songkhram is with a Maeklong Railway Market tour, which will lead you through Bangkok’s floating markets to the popular railway crossing.

A tour like this will cost around £17/$20 per person. Generally speaking these tours start early and follow a regimented program, so be prepared to have breakfast early and get to your meeting point.

If you'd prefer to do the trip independent of a tour you can take a bus.

The journey takes 1.5 hours and drops you off right by the market, though it may take longer depending on the traffic that day.

If you've hired a car or have a friend with one, you can quite easily drive to Maeklong Market. Please see the Google map below to plan your journey.

I wouldn't recommend doing the journey by moped. It's pretty far and the motorways aren't very safe, especially if you're an inexperienced rider.

If you’re feeling particularly adventurous, you can take the train from Bangkok and experience riding through the middle of the market.

Head to Wongwian Yai Railway Station (located across the Chao Phraya River) and look for a train bound for Mahachai.

After you disembark in Mahachai, you’ll have to find the ferry to Ban Laem, which is located just a few blocks from the railway station, near the park at Mahachai Pier.

Tickets should only cost 3 THB.

Once in Ban Laem, you’ll need to walk 10 minutes to the railway station, which is near the river and a temple.

Once there, look for a sign indicating you’re boarding a train bound for Maeklong.

This train will take you directly through the market.

Once you've been through the market you can disembark and wait for the train to reverse its course, so that you can take photos and enjoy the scene from a new perspective.

The journey from Bangkok will take 3 hours but will only cost you 23 THB. Bear in mind that trains are notoriously unreliable in Thailand and the journey may take much longer.

You can use the timetable here to see when the trains depart, but I'd ask the concierge at your hotel or guesthouse to check the most recent updates for you, as timetables do change.

The last thing you want to do is visit the market and not see a train, so here's a list of the times the trains arrive and depart the local station.

Again, making an enquiry at your hotel, the station, or with locals at the market is ideal, as times are subject to change.

Trains arrive at Maeklong Station at: 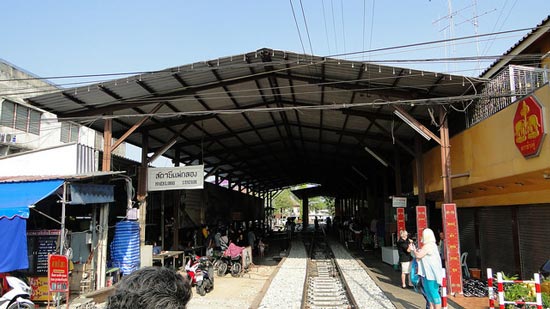 Tips for a Happy Trip to Maeklong Train Market

Hopefully you now have all the information you need to plan your trip. Here's a quick recap on what you need to consider:

Maeklong market is a favorite among visitors because it offers a taste of Thailand without the hawking and pushiness found at the popular tourist markets of Bangkok.

It's an insight into a unique way of working – literally on a train track – and there's a real sense of community here.

Have you visited the Maeklong Railway Market in Thailand? Let me know what you enjoyed about the experience, or if you have any other advice to for would be visitors.