You are here: Home / Thailand Living / Chiang Mai Burning Season: 7 Tips to Protect Yourself from the Haze

Crop burning, or slash and burn, as it has been historically known, is a major cause of pollution in Chiang Mai and much of the North of Thailand.

Actually, it happens all over Thailand, but Chiang Mai has a torrid reputation for producing the worst haze (smog).

One reason for this is that it is surrounded by a number of mountains, namely Doi Suthep, Doi Saket, Doi Inthanon and Doi Khun Tan.

These mountains form a trap around the area, which contains the dense smoke from crop burning and allows it to linger over the area.

Crop burning happens all over SE Asia, and in recent years haze from Indonesia and Malaysia has severely affected air quality in the South of Thailand.

It was the latest occurrence of the Southeast Asian haze, a long-term issue that occurs in varying intensity during every dry season in the region.

It was caused by forest fires resulting from illegal slash-and-burn practices, principally on the Indonesian islands of Sumatra and Kalimantan, which then spread quickly in the dry season. (Source: Wikipedia)

Chiang Mai is the North, where its crop-burning haze is added to by the same drifting in from over the border in Myanmar.

I'm sure, however, than they blame Chiang Mai for their problem in equal measure.

In this FAQ guide, I'll run through all you need to know about crop burning, including the risks and best avoidance/protection tactics.

When is the Chiang Mai Burning Season?

The crop burning happens between late February and early April each year.

If you book your holiday outside of this period, you'll avoid most of the pollution.

However, depending on the weather and how late/early harvests have been, burning can take place outside of these dates.

Why Do They Burn Crops?

Rice and corn fields are set on fire to clear land quickly. At the same time this fertilises the soil so that new crops can be planted ahead of the rainy season.

It is actually counterproductive, because over the years it causes the soil to become nutritionally poor. It also damages the ecosystem by destroying insects en masse.

Slash-and-burn agriculture, or fire–fallow cultivation, is a farming method that involves the cutting and burning of plants in a forest or woodland to create a field called a swidden. (Preparing fields by deforestation is called assarting.)

In subsistence agriculture, slash-and-burn typically uses little technology. It is often applied in shifting cultivation agriculture (such as in the Amazon rainforest) and in transhumance livestock herding.

The technique is not scalable or sustainable for large human populations. Methods such as Inga alley farming have been proposed as alternatives which would cause less environmental degradation. (Source: Wikipedia)

Why is Crop Burning Dangerous?

With what we know about air pollution now, crop burning is a health hazard. The smoke and dust particles created by the burning causes respiratory problems for everyone, but particularly for young children and old people.

It is most dangerous when there is no wind factor to blow the smoke away.

In dry, humid conditions a smog will form and condense in the air, making the air polluted and hazardous to breathe.

This is not a new problem. In fact, studies dating back to the 90s and early 2000s show that Chiang Mai has a serious problem:

The practice is closely linked to economics. Slash and burn takes place in mostly poorer countries, where resources for proper cultivation of the land are in short supply.

Thai farmers need the fastest and cheapest way of ensuring they can get crops planted for the new season.

The government would need to subsidize farming and provide the proper machinery in order to stop the practice completely.

Not so good, I'm afraid. A study from 2005 looked at total suspended particulate matter (TSP) loading as well as its spatial and daily variation in Chiang Mai ambient air.

The study reported the following:

The level of airborne particulate matter deduced from this study was above the baseline level at which deaths, hospital admission and respiratory
conditions were predicted to be in excess. The baseline levels used by Martuzzi et al were 30 and 40 µg/m3 for PM10. It was clear that particulate matter levels in Chiang Mai atmosphere were high, serious health problems may be expected to occur.

Oh Man, is There Any Good News?

A study from 2008, which assessed the short-term effects of air pollution and temperature on daily out-patient visits and hospital admissions in Chiang Mai, Thailand, from October 2002 to September 2006, concluded the following:

As for negating the long term effects on short term exposure, the answer appears to be to eat more broccoli, and greens in general.

Broccoli sprouts are a source of glucoraphanin, which creates sulforaphane when chewed or swallowed. This compound accelerates the body’s ability to detoxify from various pollutants, heal cells and prevent cancer. Source: (NIH)

7 Tips to Protect Yourself from the CM Haze

1. Plan Your Day Around the AQI

During the burning season it is best to limit your time outdoors, but don't just stay in like a hermit.

Check the Air Quality Index and see how safe the air is that day.

You want to pay close attention to levels of small particulate matter PM 2.5, as well as PM 10 and PM 1.0.

However, as I point out in my comprehensive post on air pollution in Thailand, PM 2.5 is often not reported by some reporting stations, rendering the reading inaccurate.

Plan your day around the readings. Today, as I write, the air pollution in Chiang Mai is very dangerous: 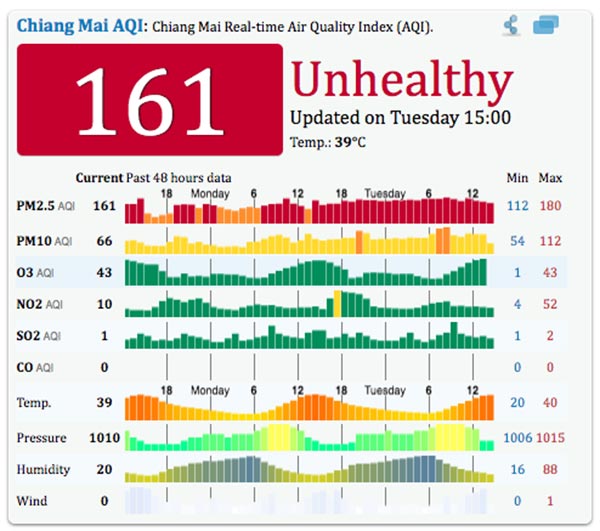 2. Try to Go Out Early Morning or Evening

The very early mornings and evenings are likely to be safer times to be outside during the crop burning season.

This is because the air will have cleared overnight, and there is less traffic contributing to pollution at these times.

3. No Cycling or Running During Burning Season

Chiang Mai is now famed for its excellent cycling routes, particular up to Doi Suthep. But don't cycle in the burning season, or run outside for that matter.

The harder your respiratory system works the deeper you breathe and take in those harmful particles.

Join a gym for the burning season.

Riding open air in a Tuk Tuk or Songthaews is unadvisable in the crop burning season.

Limit your expose by taking a public taxi or an Uber (get a free ride here).

5. Get an Air Purifier

If you are an expat or long stayer, you might choose to lower the particulate volume in your home by getting an air purifier with a HEPA filter. This will filter out the most hazardous particulate matter (PM2.5). 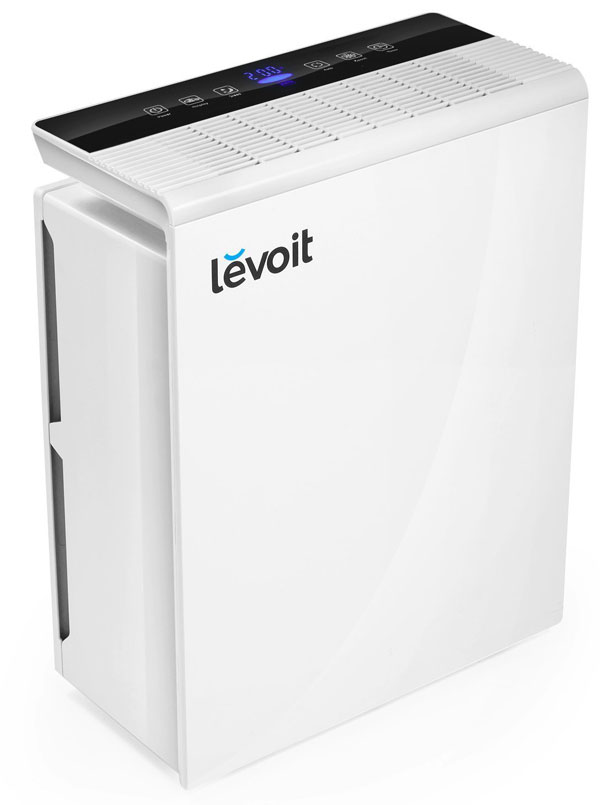 Filters particles as small as 0.3 microns and larger and filters air pollution of PM 2.5. Ideal for people who suffer from allergies, nasal stuffiness.

If you hate being stuck in your apartment, at malls, and the gym, get yourself a high-grade pollution mask.

Forget those surgical masks that cost 20 Baht in 7-Eleven, you need the following: 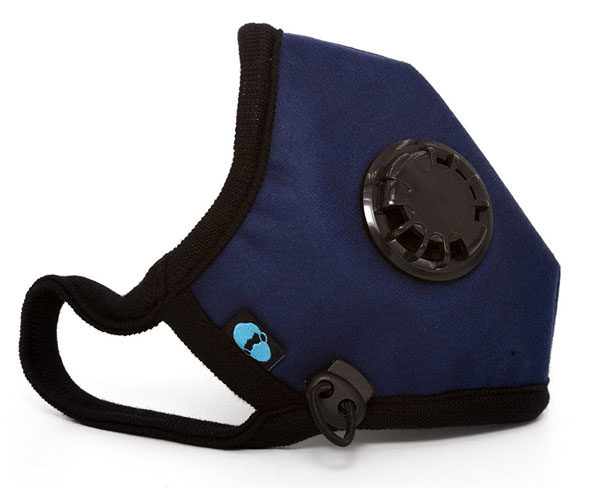 Resistant to 99% of particulate matter larger than 0.3 micrometres/microns in diameter

=> Buy a mask on Lazada (check out the Banale ones)

The mask uses a unique triple filter system. The first layer catches larger pollution particles such as dust and PM10, followed by the Three-Ply Micro Particulate Filter which stops nearly 100% of smaller particulate matter such as PM2.5 and PM0.3.

The inner filtration layer is made from a 100% pure activated carbon cloth, which was originally developed by the UK Ministry of Defence for chemical, biological and nuclear warfare protection.

The carbon filter is also treated with silver to ensure almost 100% of harmful pathogens are removed and killed. The unique filter system allows the Cambridge Mask to perform better and last longer.

We (my wife, daughter and I) have one of these each for use in Bangkok now, as the air is just so bad at the moment. Indeed, when we can, we get out of town to the countryside and beach.

There are other brands available, but these are washable too, which is great.

7. Refresh Your Home After Rain

Staying indoors, with the air-con on and windows closed isn't a healthy way to live. Fresh air is good!

But pollution from the Chiang Mai haze is worse.

So wait until the air is clear before refreshing the air inside your home. The best time is after heavy rain or wind, or both, and preferably in the morning.

A Note for Those with Existing Conditions

If you are asthmatic, or have a high sensitivity  to airborne contaminants, you should not travel in Chiang Mai in the burning season.

In fact, I'd extend this to much of Northern Thailand. for example, Chiang Rai is comprised of heavy farming land and also suffers the haze.

Book your holiday outside of the last week of February and the first week of April.

Masks may not be suitable for those with bad asthma or other respiratory issues, because some masks require you to breathe that bit heavier to maintain flow, which could be problematic for some.

Are you living in Chiang Mai? Are you travelling there right now? Leave your experiences in the comments section below.