Do you know your TIT from your TOT, your BKK from your PATTS, or your 555 from your OMB?

I know, acronyms have got way out of hand. I blame social media and lazy kids. But hey, if you can't beat 'em you might as well join 'em.

So, as a bit of fun, I have taken it upon myself to put together the first definitive expat acronym guide, to ensure you stay at the forefront of cool while living in Thailand.

I readily admit that a few of these I just made up, though they probably exist on Twitter, Reddit or somewhere else. 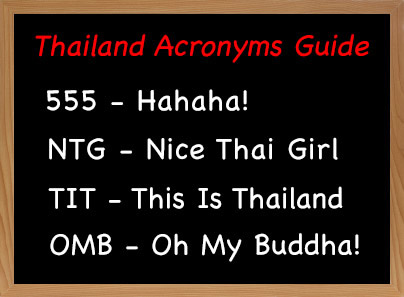 used as many times as you want to exaggerate anything, especially ‘555’.

17. Short for the popular ThaiVisa forum.

Nice Thai Girl. Used to affirm that one is not talking about a BG, gold digger, scammer, etc.

Farang Pattaya: used to describe the archetypal foreigner residing in or regularly visiting Pattaya (Can also be PF, but Thais tend to put ‘farang' first).

Over time at work. I wish I had a dime for every time I've heard a Thai say OT.