You are here: Home / Culture / A Beginner’s Guide to Thai Amulet Collecting

You'd only have to be on Thai soil for a few minutes before stumbling upon a Thai amulet, be it hanging from the rear view mirror of a taxi or dangling around the neck of a young “entrepreneur” hoping to attract luck into his life.

Amulets can fetch upwards of 1 million Baht, depending on their origin and age.

There are conventions, numerous monthly publications reselling and educating on everything “lucky” and collectable, and an abundance of enthusiasts selling on the street in areas such as China Town.

Amulets are more that just lucky charms. This is big business, much of which has little to do with Buddhism. 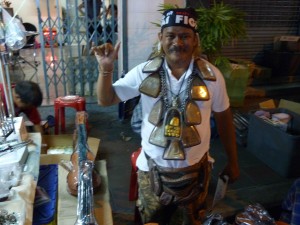 How Much Is This Haul Worth?

Where Does Buddhism Fit Into the Thai Amulet Trade?

Buddhism considers the superstition of amulets as unconscious, as opposed to the higher consciousness of the path of the Buddha.

Buddhism also considers the trading of Buddha images for financial gain to be superficial and offensive to Buddhist tradition. For this reason, Thai amulet collecting is described in Thai as “borrowing” rather than buying.

Thai amulets containing Buddhist imagery are supposed to remind the individual of the path of the Buddha and of his or her commitment to this path.

According to Buddhism, amulets do not contain special powers and only karma can determine one's life path.

The perceived “magic” of amulets actually has its roots in Brahmanic traditions.

Each batch of amulets produced in a temple must be done so by blessed, cleansed individuals.

The amulets are then blessed by monks before being handed out to congregators (probably for a donation). I'm not sure if batches are made in temples for specific distribution within the amulet industry.

Well, I like collectable things and I enjoy history. These little charms fascinate me, and for some time I have been trying to figure out how one can tell what an amulet is worth, where it's from and whether it's authentic or not.

I am not in the market to buy, though, because I'm 100% sure I'd end up paying well over the odds and getting it all very wrong.

I'm really struggling to see how the eye glass helps to identify the origin and age of an amulet. Are there specific markings one should look for?

I have searched online for information, but at best I can only find English written warnings to beware of fakes, to not trust magazine pictures and to be careful of buying mass produced amulets that aren't made in temples.

The materials used for fakes and authentic amulets are apparently  the same, making it easier for a sucker like me to get ripped off. That said, the materials mix used to make the real amulets is kept a secret on each batch.

Apparently experts know how to spot real markings, and obviously they know the issue history of  different amulet series. Another reoccurring warning I found in my research is to look out for sellers who are “selling” the luck/magic aspect of the amulet over its heritage.

Enthusiasts claim that genuine sellers are genuinely interested in promoting an authentic resale market, along with properly representing the Buddhist faith – I'm sure there's a slight contradiction in that claim.

I read in one book that there have been a few series of amulets issued by the King over the course of his reign. These have been distributed to members of the aristocracy and leading army figures. Owing one of these is sure to be worth a fair packet.

Amulets worth collecting are of course the rarer ones, such as those issued in limited runs, usually to commemorate the passing of well-respected monks or to mark commemorative days linked to the monarchy.

All said and done it's a huge business. But sadly little information is available for westerners to learn and get involved because it's essentially a “Thai-centric” hobby.

However, I am hoping that a few enthusiasts (or anyone with more knowledge than myself) might land on this page and contribute some information in the comments section, so that foreigners like myself can get an insight to one of Thailand most revered collectables.

The documentary below provides additional insight to the industry and answers many questions that I can't. It's also produced by Thai students, so the research is thorough and from a native understanding. It's only 10 minutes long too. Enjoy!