You are here: Home / Culture / A Guide to Thai Spirit Houses

Spirit houses are common in Thailand and no doubt you've seen them outside homes, hotels, malls and even on farmland.

But what are these spirit houses and why do people have them?

Ask a Thai and the answer you're likely to get will be something along the lines of “to keep the ghosts happy” – which is accurate but not the whole story.

In this post I dig a little deeper to give us all a better understanding of these miniature temple-like structures and their significance in Thai culture.

There are two Thai spirit houses commonly seen in Thailand, and usually seen standing next to each other outside of a property. These small shrines, perched on pedestals, house guardian spirits that protect the property and offer good fortune.

The first spirit house is the single pillared “San Phra Phum” (ศาลพระภูมิ), translated as ‘shrine of the guardian spirit'. This is constructed for the guardian deity known as Phra Chai Mongkon.

This deity is represented by a gold-painted statue holding a sword in her right hand and holding a money bag in her left hand.

The second spirit house is the four pillared “San Chao Thii” (ศาลเจ้าที่). Housed in this shrine are the figurines of an old man and an old woman, known as ’Da and Yai’ – grandfather and grandmother’. This represents the spirits of the ancestors who lived here in past times.

Spirits/ghosts in Thailand are referred to as “phi”.

Spirit houses are decorated with figurines, including servants, dancers and animals such as elephants and tigers. People offer gifts to the spirits of these doll-like houses in the hope that the spirits will bless the home and its occupants and bring good fortune.

The offering of regular gifts appeases the spirits and keeps them happy, stopping them from causing bad luck for the living.

Spirit houses have their roots in Animism, which is the belief that objects, places, and creatures all possess a distinct spiritual essence (1). Thai Buddhism is intertwined with Animism and has created a spiritual culture.

Even Thais who don't embrace Animist/Buddhist beliefs may still respect a spirit house and offer a Wai when they walk past. It's something Thais grow up with and, at the end of the day, there's always that chance the spirits could be responsible for your lack of prosperity. Better safe than sorry! 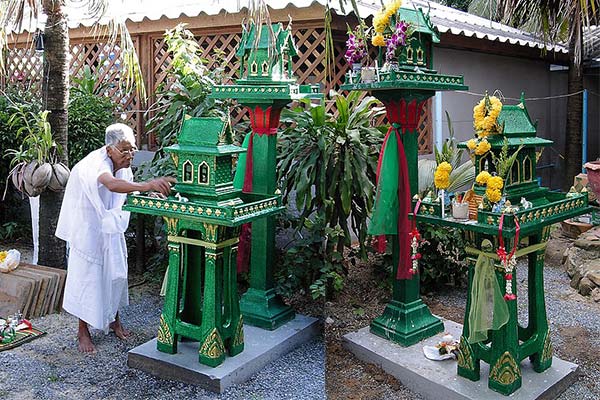 How to Build a Thai Shrine to Respect the Spirits

Assembling a spirit house is not as straightforward as one might think. If you don't follow the tradition, it could have the reverse effect and bring you bad luck.

Prior to construction, a Brahman priest or Buddhist monk holds a ceremony. An astrological chart is used to determine the color of the house and suggest a well-suited location.

The spirit house should be visible to visitors but not be built in the shadow of the building it serves. Neither should it be built to the left of a door, or face a toilet or a road.

Spirit houses are usually built in front of an old tree, if the property/land has that option. Old trees have great significance in Thailand and are often made into shrines themselves.

One example of this is the Takhian tree, which is inhabited by the tree deity Nang Takhian,

Nang Takhian is said to appear as a beautiful young woman wearing traditional Thai attire. She is said to haunt immoral and evil persons, but is of course appeased through offerings of goodwill. This is the popular tree Thais go to for lottery number inspiration.

Once the color and location are decided, a two-meter hole is dug at the location site, which will house both shrines.

The Brahman priest or Buddhist monk will then perform a ritual that exorcises any curses or evil spirits from the land. Placing nine lucky leaves, flowers and stakes of lucky wood inside the hole creates positive energy.

These initial items are followed by geometric figures and nine gemstones that correspond to the astrological planets.

The Brahman priest or Buddhist monk then chants and burns incense to move the good energy created in the previous stage into the statue of Phra Chai Mongkon – the deity who protects homes and businesses.

Once the energy of the spirit world has been absorbed into the statue, a gold leaf is placed on top.

The landowner then places the statue inside the spirit house. Ceremony attendees are then invited to place garlands of flowers on the shrines and wrap them in pieces of colored cloth.

The final step of the ceremony is to sprinkle the shrine with holy water. 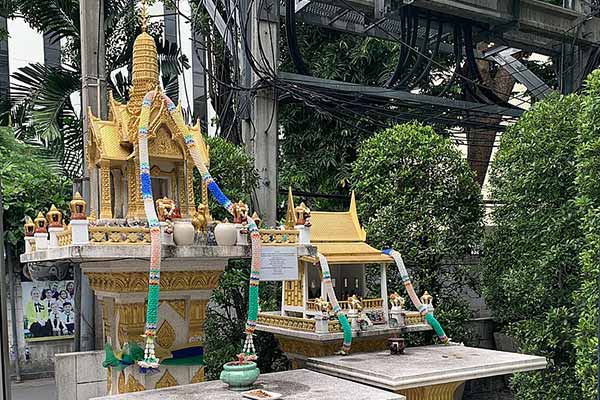 What Gifts Should You Offer the Spirits?

Spirits do get hungry, apparently. So, to help them get their fill, foods such as rice, coconuts, bananas, and sweet deserts are offered on a regular basis.

What I can't understand is, if the spirits are so hungry, why don't they eat it? I always see the food being thrown away a few days later, and apparently the spirits get angry if humans eat that food.

I liken this (a little) to the Western tradition of leaving a mince pie and a glass of sherry out for Santa Claus. However, in this case, mum or dad always eats the food before the kids wake up!

You may have seen bottles of strawberry Fanta – with a straw sticking out the top – perched atop a spirit house.

This isn't because a particular spirit has a preference for Fanta, but rather because it represents blood, which is a symbol of life in Thai culture.

In ancient times, animal sacrifice was practiced at spirit shrines. However, King Rama I thankfully made this practice illegal and people began using alternatives like Fanta instead.

The burning of incense is also a common sight at a spirit house. A worshipper will burn 9 sticks at the shrine and pray for good luck (the number 9 is considered lucky in Thailand).

In addition to incense burning, and generally only on holy days, the shrine is decorated with garlands of marigold flowers.

Asking for Permission to Stay

If you are invited to stay the night at a Thai person's home, the owner will ask the spirit guardian's permission before you arrive or before you bed down for the night.

This is done through a blessing that forms a prayer. The owner is asking for your protection and safe passage to and from their home.

When Thais stay in a property that doesn't have a spirit house, they may also perform this ritual to appease any spirits that live in and around the property.

This is because the spirits don't just arrive when you build a spirit house, the spirits are everywhere, regardless, and it pays to cover your back with an appeasement offering before you stay over.

Should I Wai a Thai Spirit House?

It isn't necessary to Wai when you walk past a spirit house, or to offer any gifts. By all means join in the ritual if you want to, but Thais won't be offended if you don't.

For most Thais, the Wai to a spirit house is a habit, and many of the young generation only offer gifts on auspicious days.

If your friends or partner do believe in the spirits, it would be wise not to mock the belief, as this is likely to offend, not to mention anger the spirit and scare your friend or partner. You can just say you don't believe in ghosts, or at least not in this capacity, and leave it there.

Perhaps you're moving into a home with a spirit house and you want to take it down or move it elsewhere. This is tricky because, like humans, spirits don't like to be thrown out of their home, and doing so incorrectly could bring you a lifetime of bad luck.

Generally speaking, upon moving into a new property, Thais will leave an existing spirit house where it is and erect a new one alongside. If a spirit house requires removal then a ceremony must take place.

Again, a ceremony is held and a Brahmin priest or Buddhist monk will determine the best time and date for its removal. Once removed, the shrine is taken to a spirit house graveyard.