You are here: Home / Wildlife / The Soi Dogs of Bangkok: A Struggle for Survival on the Streets

Their eyes are shimmering blue: a crystal clear promise that these dogs will never see again in their lives. Their fur, ranging from rustic pale yellows to dust ridden browns, is matted with neglect.

More common than not, however, these dogs don’t have any fur to neglect; infections causing loss of hair leaves nothing but blood and flaking skin.

The brutal Thailand heat doesn’t help, either. The sun all but cooks these lesions as the dogs try to stay cool and comfortable in conditions that make for anything but. 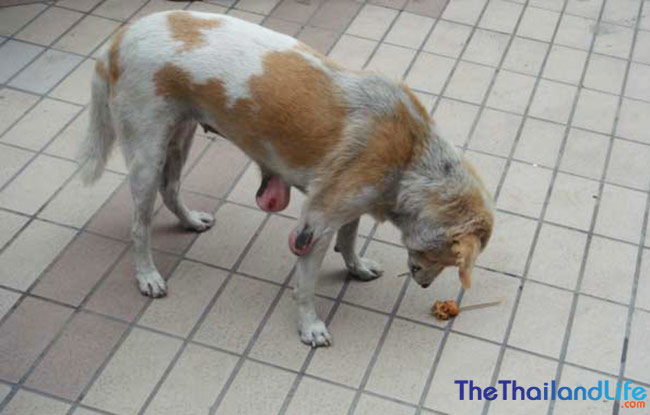 A soi dog, riddled with tumours, stares down at a piece of meat on a stick.

For those dog lovers who treasure and cherish man’s best friend as if they are their own flesh and blood, it might be overwhelming to hear of animals in such condition, but this is all but unusual in the streets of Bangkok, Thailand.

Street dogs, or soi dogs, have become an ever-growing problem for tourists, expatriates, Thais and, most importantly, the dogs themselves.

While the actual estimate is unclear as to how many dogs are roaming the city, one thing remains certain: something has to be done to reduce the number of stray dogs who seek refuge in the streets. 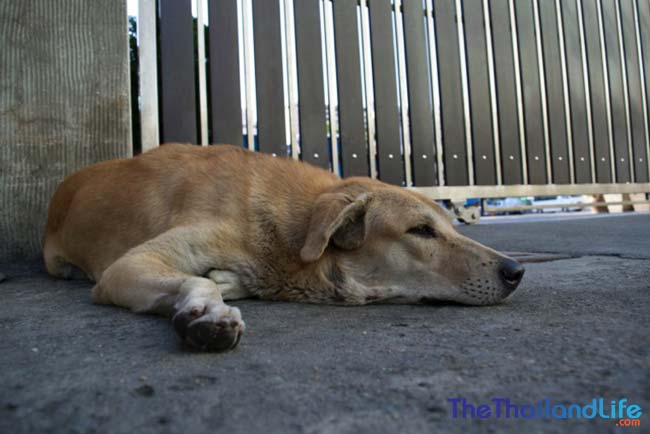 About 300,000 strays wander the streets of Thailand’s capital. The City of Angels is one slowly becoming a city of dogs … homeless ones at that.

They do not fall from heaven,” Thomas Jäkel, founder of Khlongdogs, said. “They come from humans first.”

Khlongdogs is a private charity created and funded by Thomas and his wife, Paporn Jäkel. More than 16 years ago, Paporn and Thomas started the non-profit with a single dog named Nicky. They found her on a farm outside of Beijing, China, where she had been neglected and malnourished; infested with ticks, fleas and worms.

“She was ‘useless’ because she did not fit the looks required by the People’s Liberation Army who usually bought dogs from this farmer, so we paid the farmer and took Nicky with us,” Thomas said. “She lived with us until her last day.”

Dog ownership has been tightly regulated in China for some time now, and regional governments have even been known to kill stray animals before. Beijing bans ownership of dogs larger than a certain size, as well. The Jäkel’s moved to Thailand after they got Nicky, and it was then that Khlongdogs began. 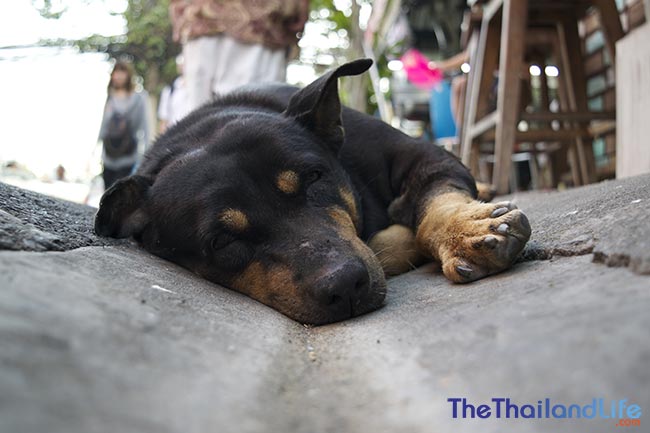 They now have 12 dogs and 22 cats living in their home in Bangkok, Thailand. Over the years, however, they have taken in over 50 animals and rescued or aided more than 150 dogs and cats. They would open their home to more animals if they could, but they simply don’t have the means or space.

“We are fully booked,” Thomas said. “The problem is not us, because I would take more. There are many serious cases.”

While Khlongdogs cannot take in every stray, Thais will oftentimes give food to the soi dogs. Buddhism is practiced by 95 percent of the population in Thailand, and Thais feed the dogs in order to make merit.

This, however, is not enough. Much of the food lacks the required nutrition to sustain a healthy dog, and many of the dogs are suffering from more than just hunger. 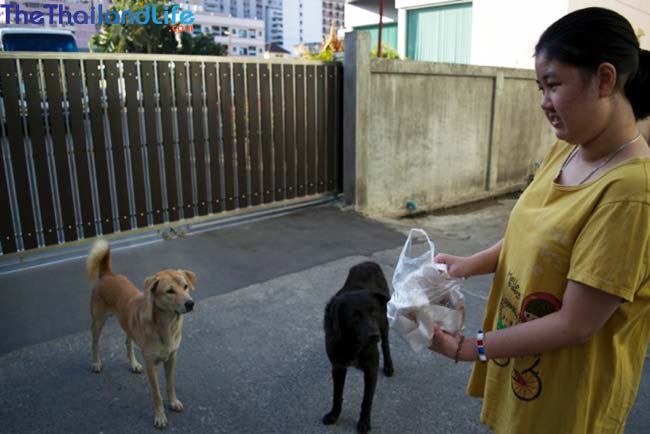 Why So Many Dogs End up on the Street

The ever-growing soi dog problem stems from a relatively simple reason: owners are not spaying and neutering their animals. Owners then abandon their dogs in the streets, because they don’t have the means to take care of them.

“The problem starts with the irresponsible owners who don't neuter the dogs and let the dogs roaming around the neighborhood,” Tharinee Wipuchanin, founder of Pic-A-Pet4Home, a shelter in Bangkok, Thailand, said. “Once the dog get pregnant and gave puppies, they would be dumped at public area.”

That, or because the once adorable, cute puppy becomes a dog that is no longer a novelty item.

I save one, they dump another three,” Thomas said. “It’s an endless story.”

These dogs are out in the streets surviving amongst other strays, and some wind up having more puppies. Just recently, Paporn hired a dog catcher to roundup four female dogs. They had been having litters on a railroad track of up to eight puppies at a time, of which only a handful survived.

Because of Khlongdogs’ limited funds, Paporn can only focus on spaying female dogs. There is simply not enough money to help every animal in need. 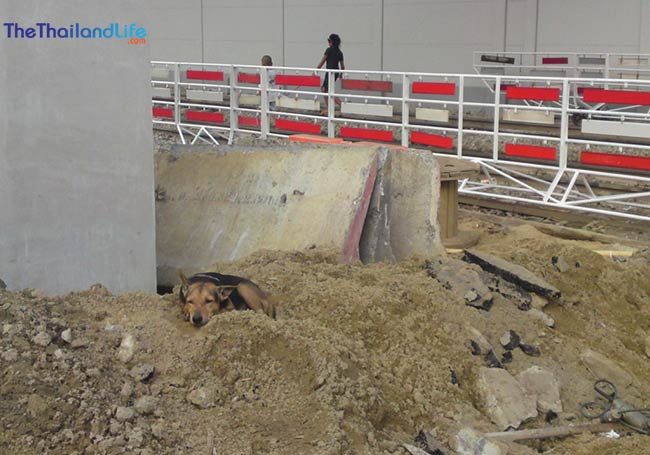 A pile of sand makes for a comfortable bed

This huge problem goes beyond malnourished, mistreated, disease-ridden dogs. The sheer volume of strays is presenting a genuine risk to the public.

For example: A pack of stray dogs attacked a Thai-German boy on Pattaya Beach and, in a different attack, vagrant dogs left an 8-year-old covered in blood and on the verge of death before being rushed to the hospital.

Danial Haaby, a graduate student from the U.S., was bitten by a stray dog while working on his TESOL certification in Hua Hin, Thailand.

“The dog quickly turned towards me and bit as hard as it could into my heel from behind, Haaby said.”

Haaby was bitten after apparently spooking a sleeping soi dog in an alley on his way to the beach. His presence just a couple of feet from the stray landed him in the hospital needing stitches, multiple wound cleanings and a series of rabies vaccinations.

“I think what I learned from being bitten and my dealings in general with street dogs in Thailand is that there is a certain level of caution that they demand beyond domesticated dogs,” Haaby said. “They are frequently abused which makes it easier for them to attack people.”

Frequently abused is an understatement. Of the countless number of animals that have taken refuge in the Jäkel’s home, the majority of their backstories are so horrific it seems almost impossible that there could be any truth to them. Brain damage, broken spines and legs, missing legs, intestinal issues, distemper virus, rabies, loss of sight: the Jäkel’s have seen it all.

“This is unacceptable,” Paporn said. “This is not their fault.” 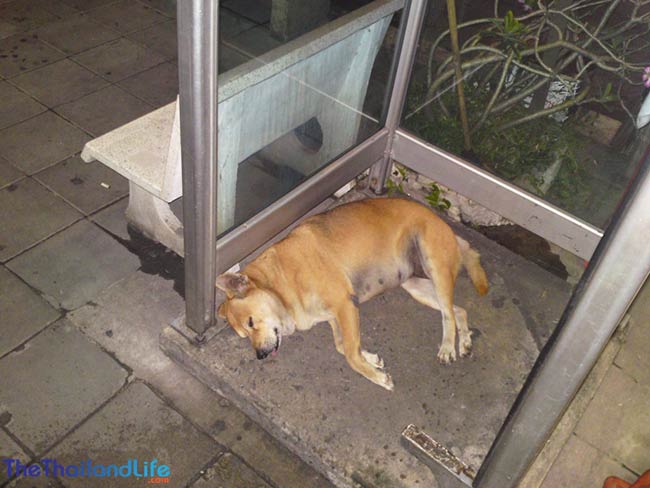 Wherever I lay my head, that's my home…

Thailand is taking baby steps when it comes to protecting their animals. Elephants still carry the weight of excited tourists on their back. Tigers are used for photographs. Orangutans fight in boxing rings in order to light up crowds as they adhere to trainers standing idly by the ropes. Where does that leave soi dogs?

The 2014 Prevention of Animal Cruelty and Provision of Animal Welfare Act was finally passed by the National Legislative Assembly after years in the making. The law will punish those people who neglect or torture animals, fail to properly take care of them and transport animals in unsuitable vehicles that lead to death or injuries.

The government doesn't see the problem as important and urgent so the budget is limited and no serious protocol is set to control the stray population,” Wipuchanin said. “This is why there are so many street dogs.” 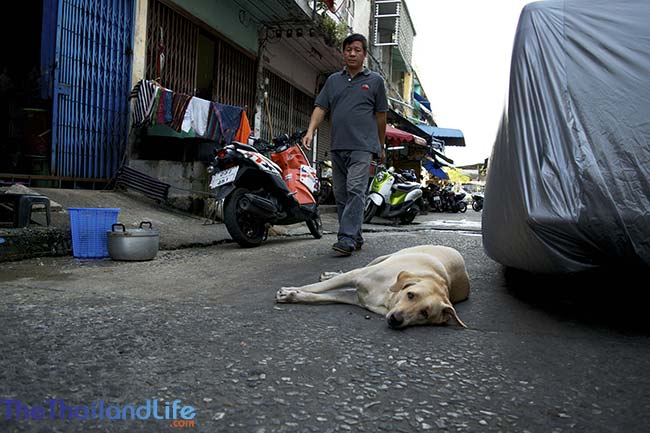 Pet owners will hopefully take notice of this and be more responsible in caring for their pets. If they don’t, the legislation seeks to impose harsh punishments, including a one-year jail term, a fine up to 20,000 baht, or both. While this is a step in the right direction for those animals who have not had a voice for so long, it is still not enough.

“I think we should limit the puppy mills,” Paporn said. “They should completely stop.”

She doesn’t see that happening anytime soon, however.

“They are a business,” Paporn said. “This is a bloody business.”

Regardless of Haaby’s close call with a soi dog in the alleyway of Hua Hin, Thailand, he is still able to understand and empathize with those dogs living on the streets. 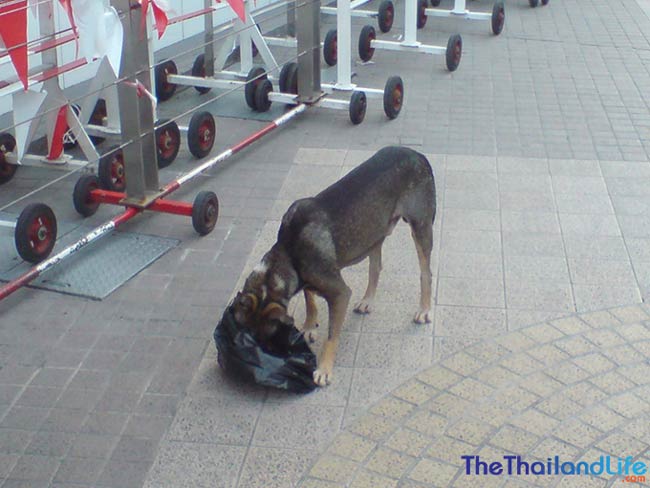 An underweight dog investigates a rubbish bad outside a shopping mall

“I always loved dogs and still do, but I seem to have a higher level of caution around them now, even in America,” Haaby said.

Haaby thinks the stray dog problem in Thailand could benefit from the fostering of a more humane environment in general for dogs. For foreigners, however, Haaby said it is especially important that they know the difference between feral dogs and domesticated ones, and act cautious in the presence of those dogs who are not domesticated.

“They are not pets and many of them are dangerous if you don’t pay attention to their boundaries,” Haaby said. “They are wild animals looking out for themselves in a rough environment, not what we are used to dealing with when it comes to dogs in countries like the U.S.”

Wipuchanin said that although the street dog problem is Bangkok is decreasing, there are still many steps to be made in resolving it completely.

“Register the owned dogs using microchip and seriously punish those who let their dogs roam around the neighborhood and those whose dogs create problem,” Wipuchanin said. “Control and register breeders. This is a big problem when it comes to aggressive breeds.  They were dumped because of their aggressiveness.  Breeders also dump unwanted or unsold dogs.”

She also said that the government should be providing sufficient neutering services to all dogs, as well as educating people on how to be responsible pet owners, especially younger people.

“This should be added into the school curriculum,” she said. 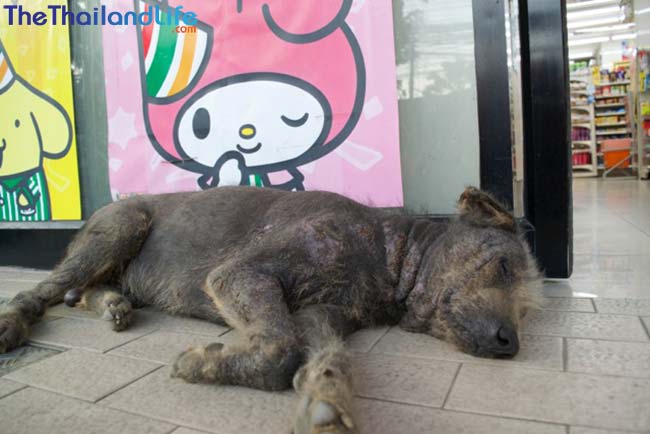 A soi dog cools off as the air-con escapes through 7-11's automatic door.

How You Can Help

Khlongdogs encourages foreigners to feed the street dogs when possible. People should inform organizations like Khlongdogs when they come across a street dog that is in particularly bad shape. Donations are also very helpful.

“The cost of food, medication, hospital bills and caretakers are about 30,000 to 50,000 baht per month,” Wipuchanin said. “This will fluctuate on the vet bills per month.”

The Jäkel’s estimate that they spend about $1,500 a month on the rescued animals that live in their home. This estimate does not include the food and care they provide to the dogs and cats that reside in temples, the price of weekly feedings they go on in different areas around the city as well as the odd jobs around Bangkok they undergo when needed.

“This house must be secure if we have donations or not,” Thomas said.

Those wanting a pet should not import a dog or buy from a breeder: there are enough soi dogs to go around. There is a stigma that street dogs are all combative and attack humans as well, but this is not true. While some street dogs eventually become aggressive, due to abuse or lack of food, the cause of this aggression towards humans is brought on by negligent owners and animal abusers in the first place.

It is possible to look past the matted fur and infections the streets have left these dogs in and remember … they are still just dogs.

“They all look good if you treat them nicely,” Thomas said. 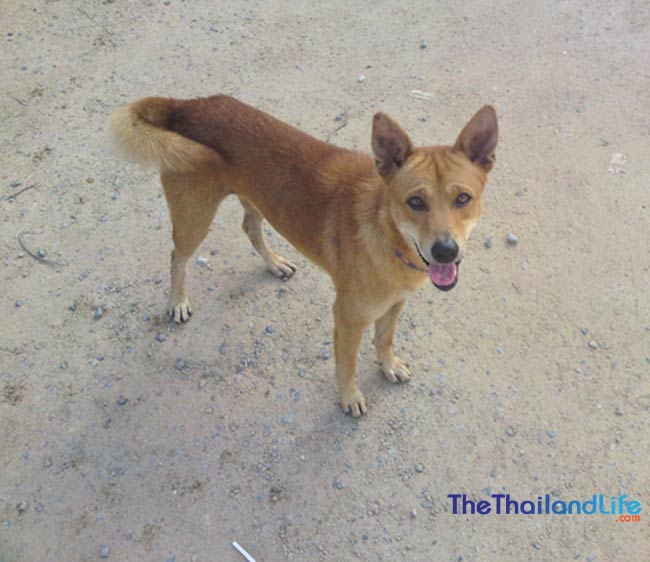