You are here: Home / Culture / Is Thai Massage Really Good for You? Exploring the Claims Vs. the Science 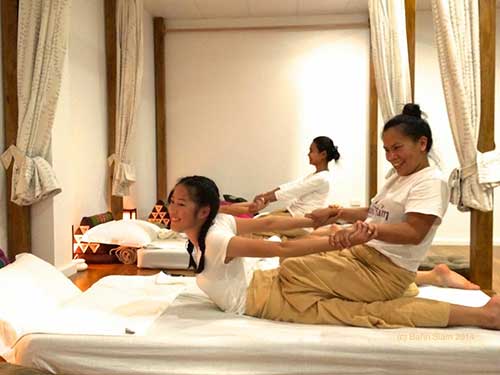 One of the huge benefits of living in Thailand is the very affordable cost of getting a wonderful Thai massage. I am of course talking about the traditional kind, not the more saucy type, you may be disappointed to read.

For a mere 200-400 Baht, depending on the area and decor of the business, you can melt away the stress and tension in your body with a one-hour Thai massage for a fraction of the 50-100 Pounds/Dollars/Euros it would cost you back home.

As an avid fan, and someone who believes it does me the world of good, I recently thought – after having a masseuse who performed some twists and turns on my body that I had to question as potentially dangerous –  is Thai massage actually good for you. I mean, what are the purported benefits and is there any scientific evidence to back them up.

There are, of course, particular issues when discussing a process as experiential as receiving a massage, particularly when one wishes to apply some measure of scientific evidence to the topic. Double blind studies are impossible, and this is a problem when attempting to establish clear benefits to any of the internal processes we humans have developed to improve our well-being.

This problem has affected many disciplines that have been with us for longer than most religions. Practitioners of Yoga, Tai Chi and meditation will all extol the virtues of their art, but we are unable to verify much objectively. The same can be said about Thai massage; we know that it feels good in the short term, but actual verification of what the practitioners claim – benefits like slowing the ageing process, preventing illness by boosting the immune system, reducing the symptoms of asthma and alleviating degenerative diseases – is thin on the ground.

Where possible in this post I have provided case studies to support the claims, but some benefits of Thai massage are impossible to quantify. I have also applied medical studies that deal with sports or Swedish massage where appropriate. I ask your forgiveness that I have not provided irrefutable evidence in some cases; it simply does not exist at the time of writing.

According to the Buddhist canon Shivago Komarpaj, the physician to the Buddha, is credited as the inventor of Thai massage over two and a half thousand years ago. While this is a nice enough legend, the actual history of Thai Traditional Massage (TTM) is more complex.

Like most cultural practices that have such long lineage, TTM is likely to be an evolving amalgamation of many different arts. Over time, TTM has been adapted from its original forms with influence from India, China, and other South East Asian regions. The colonial period of the nineteenth century accelerated this process with the influence of western trade routes.

In the modern day, professional TTM practitioners are regulated by the Ministries of Education and Public Health in Thailand, though there is a limited oversight in other countries. This is partly due to the strenuously physical demands on receiving a Thai massage.

It must also be mentioned that there are very many hereditary methods that have been practiced in rural areas by family lineages that stretch back centuries and remain unregulated. In western countries like the UK an hour on the table costs around ten times that of the going rate in Thailand, which is around the £6 mark.

With prices so low for a recognised masseuse to work on you, I cannot in good conscience advise visitors to Thailand to seek out the near legendary abilities of the hereditary masters. Wherever you go in the world, being a tourist means you're pickings for charlatans, and while of course I am not accusing every unlicensed masseuse in Thailand of being one, you must consider that when you visit a Thai massage shop, you are taking a slight risk in not knowing just how qualified the person applying pressure to precious areas of your body is.

You can, however, usually tell the qualified, experienced masseuse/masseur from the “just doing it for some cash” flyby worker because the latter tends to steer clear of any complex stretches and twists that can result in injury if performed incorrectly. That said, most of us who've been here for a while have experienced some questionable neck-cracking followed by some naive giggling, not dissimilar to that of a child finding out something works for the first time – you leave thanking buddha that you aren't in a neck brace!

Speculation aside, It's worth noting that many Westerners gain their TM experience from schools in Thailand, so certification must be pretty credible, right?

TTM has been linked with Muay Thai for as long as the art has been around. Why? Well, the robust massage is excellent for limbering up limbs for athletic performance and relieving deep muscle tension afterwards Useful for both martial artists and stressed out civilians.

It may seem obvious but having a physically relaxing experience is good for the mind. A 2004 study found significant improvement in the mental well-being of patients suffering from musculoskeletal pain when treated with massage compared to treatment with relaxation tapes. Like Tai Chi and Yoga, TTM is as much a moving meditation as it is a massage.

Most likely a contributing factor to the post-massage sense of well-being is the boost to serotonin and reduction in cortisol found in people who have received massages. Cortisol being a stress hormone, serotonin being the happy hormone. A clear positive result.

Although not medically researched, it has long been held that TTM benefits the circulation of blood in our bodies. This is said to aid in the reduction of migraines through the use of acupressure. While the invisible energy lines that are supposed to move through our bodies are hotly contested by medical research, there is significant anecdotal and experimental evidence to support the claim.

I found this study illuminating. Autistic children generally experience much higher levels of anxiety and stress. Traditional Thai massage has been shown to provide some degree of improvement to stereotypical behaviours in autistic children.

Patients suffering from scapula costal syndrome (SCS) showed a reduction in the pain suffered and overall patient satisfaction when compared to ultrasound therapies.[i]

7. The Human Touch is Language

We instinctively respond to human touch from birth, and are attracted to it (or repelled from it, depending on circumstance) our entire lives. The touch of another human in a relaxing scenario devoid of the pressures of the real world is priceless. “touch strengthens relationships and is a marker of closeness,” he says. “It increases cooperation but is also an indicator of how strong bonds are between people,” – Michael Kraus, University of Illinois

Massage increases delta wave frequency in our brains. This particular brain wave is closely associated with deep rest and sleep- I’m sure with less strenuous forms of massage you have experienced the sensation of nodding off on the table, as I have.

We see then that from the deepest part of our minds to the tips of our toes, traditional Thai massage can relieve pain, stress and improve the functioning of the only body we have. Admittedly, the medical evidence for much of what has been claimed is sparse, but essentially there are very few downsides and many potential benefits. What do you have to lose?