You are here: Home / Culture / Siam Niramit – 7 Seven Centuries of Thai Culture – Is It Worth Going?

Widely-known for its welcoming people, breathtaking beach locations and flavourful dishes, Thailand remains one, if not the top Southeast Asian nation to spend a holiday.

But what people often miss on a holiday is an insight to “real” Thai culture, and the history behind that culture.

If you're interested in culture – dress, music, beliefs – and indeed theatre, then you'll probably want to travel back seven centuries with the Siam Niramit show.

In this post, I'll pull back the curtain on this popular show and give you the finer details on what to expect: the storyline, the entertainment, the location, how to get there, the best place to get your tickets, and why, like me, you might not want to go (again).

Note that this review is for the Bangkok show, but the Phuket show is identical. 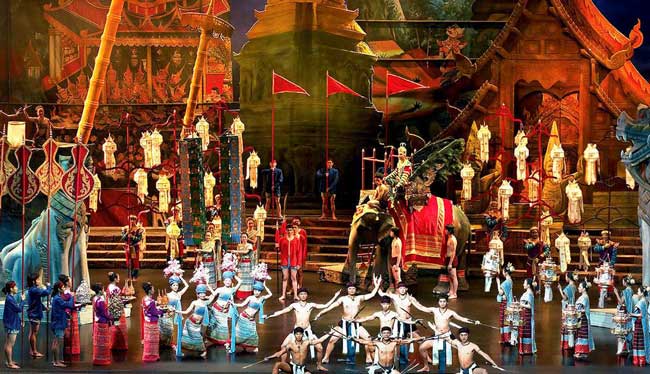 What Is Siam Niramit?

Siam Niramit is a world-class show of Thai arts and culture.

It showcases more than a hundred performers in a variety of traditional costumes in a spectacular sets that last for approximately an hour and a half.

The show is held on a gigantic stage that holds the Guinness World Record for the tallest proscenium arch in a theatre – measured at 11.95m. Siam Niramit is also holder of several prestigious entertainment awards.

In a nutshell: it's an amalgamation of Thai history and culture brought to life through fabulous visuals, lighting, dance and acrobatics.

Although it lacks a plot; it is not so much a story but a colourful education in Thai history. And children won't need to understand the storyline per se; as they'll simply enjoy the the dancing, visuals, mysticism and excitement of it all.

Although the main show starts at 8:00 PM, the Siam Niramit complex opens at 5:00 PM, so you’ll have plenty of time to roam around before the show starts.

Aside from the performances in the Ratchada Theatre, there are also other facilities you can enjoy inside the Siam Niramit complex, including: 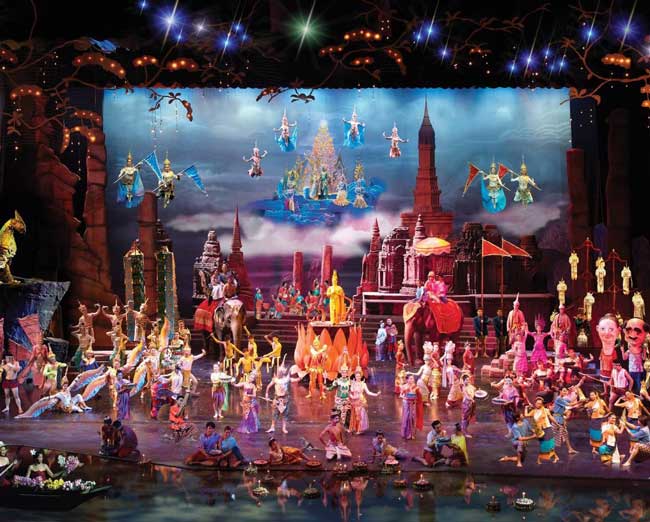 Siam Niramit is held at the 2000-seat Ratchada Theatre. The stage occupies more than half of the entire theatre space and really is quite something.

The show is divided into three acts.

Act I: Journey Back to History

Siam is the former name of Thailand. It was changed to Thailand in June 1939. It was then renamed Siam from 1946 to 1948, after which it again reverted to Thailand.

The first act shows how for more than 700 years, Siam, housing diverse cultures, became a crossroad at which civilizations meet.

The North: You’ll witness the King and Queen leading a procession to worship relics of the Lord Buddha by releasing a ceremonial lantern.

The South: This scene shows the cultures of Thai Buddhists and Muslims mixing harmoniously, and Chinese merchants arriving for barter.

The Northeast (Issan): A religious festival is celebrated by Northeast villagers in front of the stone castle, a legacy of Khmer civilization.

The Central Plains: This scene presents the life of people in the capital: the simple life of peasants and the grand life in the palace, as ambassadors from the West arrive to establish foreign relations.

The third act enacts the importance of the Law of Karma, a common religious belief in Thai culture. Karma tells us that good or bad deeds in this world result in either merit or suffering in the afterlife.

Fiery Hell: The Fiery Hell, with flames intensified by the sins of people, shows how condemned souls receive punishment for their crimes.

Mystical  : This part showcases various mythical creatures residing in the mesmerizing boundary between the human world and the heaven — the   forest.

This Act exhibits a variety of Thai festivals including Songkran, Ordination Ceremonies, Loy Krathong, and the Phitakhon Ghost Parade.

A combination of religious ceremony and cultural celebration, these festivals allow the locals to gather merit, as they believe it is needed to go to paradise.

How to Get to Siam Niramit

Here's a Google maps link for you.

The show is also held in Phuket. Here is a map if that's the performance you are going to:


There are three ways to get to Siam Niramit in Bangkok:

The pickup point is at Exit 1 of Thailand Cultural Centre MRT Station.

Drop-offs are also offered after the show.

If you feel like walking from the station to Siam Niramit instead of riding the shuttle bus, use the footbridges to cross the busy intersection.

Siam Niramit is just opposite the Thailand Cultural Centre. Allow 10-20 minutes to walk there.

Personally I don't recommend this is the very hot months. The evenings are humid as hell in Bangok and the last thing you want is to be an uncomfortable sweaty mess by the time you arrive.

If you want a hassle-free ride to Siam Niramit, you can rent a private car or hail a cab from your hotel. Or use GrabTaxi.

Ticket prices vary from one travel agency to another and come with an optional buffet dinner.

Of course, the closer the seat is to the stage, the higher the price.

Ticket prices range from £29.69 for a standard seat without buffet to £50.75 for a platinum seat with buffet dinner. If you compare that to a West End or Broadway show, it's fairly priced. 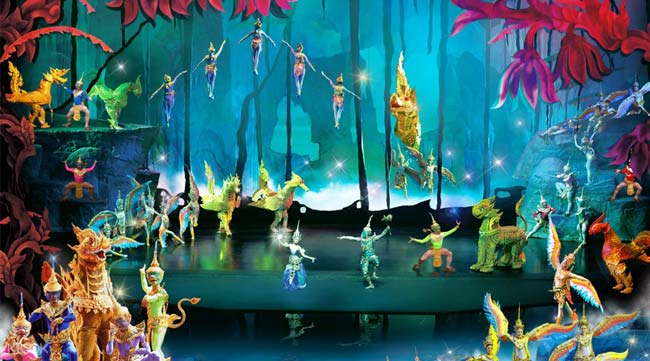 But Wait, Here's Why You Won't Want to Go

The show is really well put together and you definitely won't be disappointed in that regard.

However…Would I go again? No.

Would I have gone if I had known what I know now? No.

I went with a friend, quite spontaneously, who had a spare ticket. I didn't know much about the show at all.

I did realise once we'd arrived that elephants might be a feature because I saw one in the village, but rather than bolt I decided to stay and see what unfolded.

I have the luxury of being able to write about the show here on my blog, so at least I am able to inform others.

I think we'd all agree that in this day and age animals do not belong in circuses or shows. And watching these majestic animals who should be living in the wild being led to perform in costume is disturbing.

You only have to YouTube search for ‘breaking an elephant' to see just how cruel the process is to enslave these wonderful animals to obey a master.

=> Your Next Read: Why  Never to Ride An Elephant in Thailand

I did email the Siam Niramit show to express my concerns, but sadly I'm just one foreigner living in Thailand who is unlikely to make a difference. I doubt I'll hear back.

If you don't care about animal welfare then no doubt you'll enjoy the show and not be bothered by the elephants. But personally I was uncomfortable every time the elephants were led onto the stage.

It is a shame. I can't see why they don't update the show and let the elephants go to live in sanctuaries. The show can still go on without the unnecessary enslavement and cruelty.

What are your thoughts on this matter?