These days it seems like every other foreigner you meet in Thailand is doing some sort of work online.

Whether a retiree managing business affairs back home via email, or a full scale internet marketer working out of cafes and co-working spaces, more and more people are taking advantage of being location independent. 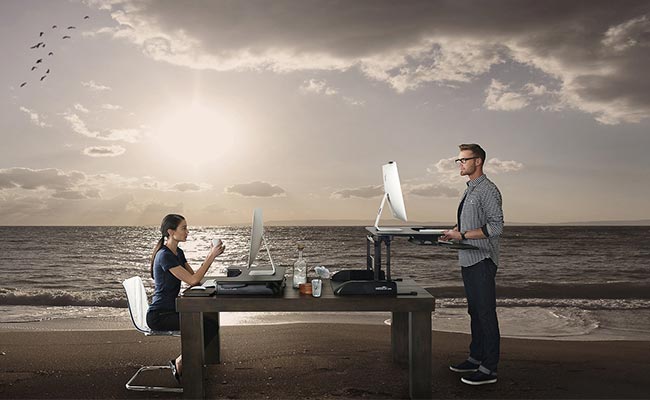 So what's the problem?

Well, the law pertaining to foreigners working in Thailand were written prior to the growth of the internet, which means that anybody falling into one of the aforementioned categories cannot obtain a work permit that covers the type of work they want to carry out in the Kingdom.

The reality is that the moment you conduct any type of work online in Thailand, you are technically breaking the law. No type of work is permitted without a permit. But as we know judging by the hundreds of movie extras working on tourist visas, the law isn't always applied.

However, even those desperately trying to comply with the law can't currently do so.

What the Law Says About Working Online in Thailand

That's half the problem. The law is broad and doesn't say anything about working online. Here's what the law says:

Alien” means a natural person who is not of Thai nationality;

“Work” means engaging in work by exerting energy or using knowledge whether or not in consideration of wages or other benefits;

To perform any professional work, regardless of whether or not there is an employer.

This definition is very broad, catching in its net all forms of work. Technically, even if you're staying in a hotel for a week on a tourist visa, sending a few work-related emails each day is against the law.

Can I Obtain a Permit to Work Online in Thailand?

No, is the short answer.

Foreigners cannot set up as a sole trader or limited company with one employee (you). To obtain a work permit, other than through an employer, you need to set up a Thai company.

The requirements for this are a minimum of 4 Thai employees per foreigner, a 51% holding Thai partner who isn't included in the 4 employee quota, 2 million Baht business capital, and a business premises.

As you can see, this isn't really a solution for a guy who sends a few emails a day from a cafe, is it?

What Lawyers Say on the Matter

Back in 2009, I was writing for a magazine based in the UK. It was a small gig writing an article each week. The pay was modest but it paid my food bills and nights out.

I was fairly new to Thailand back then and I was concerned about working remotely in this way without a permit. But everyone I spoke to said you've got nothing to worry about.

So I decided to pop off an email to a well-known Bangkok-based legal firm asking whether a permit was required for a person working online in Thailand for an overseas client.

The response was very interesting. Here's the reply:

Thank you for contacting [name undisclosed]

Legally speaking, you are required to carry out your tasks with a corresponding Work Permit, regardless of the fact that you are doing your job through your laptop. This is because you are earning income whilst you are in Thailand.

At the same time the process of procuring a Work Permit is just complicated, as opposed to just doing your thing discreetly. Logically, thus, I would opt for the latter, like more or less what you are doing at the moment.

The most important thing in the end is you have a visa that makes your stay in Thailand legal.

Should you have further questions, please don't hesitate to contact us.

Have a nice day!

This shocked me a little, because legally speaking I was operating outside of the law, but being advised to do so. I asked my brother, a lawyer in the UK at the time, what he thought of this position. His response was:

I would be very sceptical of a law firm, or lawyer, that actually advises you to break the law. We often point out to clients that what they are doing is against the law and the action they should take to remedy it, but would always stop short of advising them not to do it.

Thailand was a different place back in 2009. The whole “working online” thing was quite new and there were no legal guidelines specifically covering this area.

So you'd think that considering the explosion of the “digital nomad” scene there would have been some legislation brought in to regulate online workers.

Sadly not. And having spoken to a fair few people working online in Thailand over the years, I've discovered that I'm not the only person to receive a similar response from a lawyer.

In fact, law firms have been giving out this advice for many years, because they themselves have been waiting for the law to catch up this modern way of working.

Some people, however, would argue that the law doesn't need an ‘online worker' inclusion because it provides a clear definition of what working in Thailand means. You simply can't do it without a permit.

This means thousands are breaking the law. So what happens if you get caught?

Does Working Online Put You at Risk of Being Arrested or Fined?

If you are working in Thailand without a work permit, then you will be subject to the following prosecution:

A foreigner who engages in work without having the work permit for it shall be liable to imprisonment for a term of not exceeding 5 years or to a fine from THB 2,000 to 100,000 or both.

Sounds scary, but don't panic, your Shopify or Etsy store isn't going to land you in the slammer.

You will often hear news that immigration is cracking down on illegal workers. But this has nothing to do with those working online.

Such crackdowns usually target illegal migrant workers, and illegal tour operators and guides working in Thailand, not those working independently / for companies outside of Thailand.

So what happens when someone does get caught working online?

In the 13 years I have been here there have only been a couple of cases I know of where people have been arrested.

The first was partly a set-up by someone with a vendetta. This person reported to immigration that foreigners were working illegally at a co-working space in Chiang Mai. Immigration raided the place and arrested a bunch of foreign nationals.

However, all were released when the immigration police realized they were working on their computers (online), not actually for the co-working space itself (link to report).

The second was the case of 17 foreigners arrested in 2015. Immigration officers raided a condominium in Chiang Mai, where the foreigners were suspected of teaching English to Chinese nationals online. This was reported in the Bangkok post here.

I don't know the outcome of this case but I doubt it resulted in more than a fine. The problem here was that the operation was pretty big, with 17 employees. We're not just talking about one dude on his laptop doing web design for a firm in the US.

This is clearly a case where a company could have and should have been formed.

The only other cases I know of revolve around raids on illegal online casinos. Gambling is illegal in Thailand, whether online or not.

The fact is, the majority of online jobs are tolerated in what is an unwritten “grey zone”.

If your work doesn't fall foul of one of the following sins then you aren't likely to ever have an issue with tinkering away on your laptop:

Are There Any Plans for an Online Work Permit?

The relevant authorities have been aware of people working online inside Thailand for many years, so why haven't they developed a permit for online workers?

I believe there are three key reasons for this:

It does seem like a missed opportunity though. Why not develop a digital nomad visa that includes a simple permit and a tax reporting requirement. It could attract a fair amount of revenue.

I guess this goes back to my first point above. Is it really worth the effort?

Nomads are coming in the absence of a permit and staying and spending money. The lack of regulation is most likely why they come.

The authorities clearly don't care about the little guy/gal writing blog posts on the beach. If they did, they would have done something about it by now.

I Don't Want to Work Illegally, What Can I Do?

There are two things you should do if you are concerned about the work you do online inside Thailand.

The first is to fully acquaint yourself with the law. Understand what the current legal guidelines are on work and know exactly where you stand. You can read the Alien Working Act here:

*Note that there is not one reference to “web” or “online” in this document. It is outdated, but perhaps remains so deliberately.

If you fall into the grey zone (read my grey zone list above), don't worry. You don't fall foul of the law, but rather the law doesn't legislate for you at this time and you are tolerated – just like hundreds of others. But do be discreet.

If you are still concerned, speak with a reputable lawyer and seek legal advice like I did.

At least that way, should you be accused of working illegally, you can at the very least prove that you have actively been trying to get a permit to cover the type of work you do. Make sure you keep all correspondence between yourself and the law firm.

Have you been given legal advice about working online in Thailand? Share your experience below in the comments section.