You are here: Home / Culture / Interview with ‘A Geek In Thailand’: The ‘Must Read’ Book by Jody Houton

If you've ever tried to explain Thailand's colourful, diverse culture to a friend who has never visited, or to someone who is about to go and unsure what to expect, you'll know it's a tall order.

Where do you start?

Because of this, your experience and explanations of Thailand will always reflect the areas in which you travel/live and the type of people you interact with, which makes it almost impossible to sensibly generalise “what Thailand is like”.

My advice? Get your friend a copy of A Geek In Thailand!

Moreover, get yourself one!

After browsing through this book for 5-minutes, I knew it would be a winner. Why? Because it has done what so many other books have tried to do but failed, and that is to condense the Thai experience into bite-sized, digestible chunks that even those who don't like reading books will enjoy.

It's not just for “noobs”, either. Even a veteran like me learnt a solid few things between these pages, particularly in the arts section. It was also fun to explore aspects of Thailand I hadn't visited in years.

In fact, I was so impressed, I contacted the author, Jody Houton, to see if he'd agree to me picking his brain on how he went about putting A Geek in Thailand together.

Luckily he did. Here's what he had to say…

Interview With ‘A Geek in Thailand'

I’m from Manchester, UK, but haven’t lived there for about 15 years, leaving almost immediately after graduating.

In the interim, I’ve lived in lots of different countries, teaching English, working as a journalist, and writing freelance. I came to Thailand around seven years ago on holiday; one thing led to another, as tends to happen with many expats here, and I ended up returning to work. 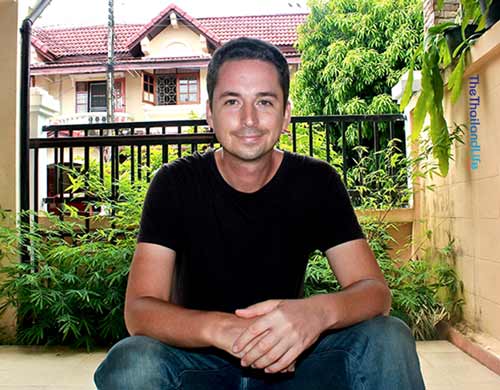 Yes, it’s my first published book. It took around 2-3 years, including an eight-month delay, courtesy of the military coup, as the publisher, rightly so, thought it wasn’t the best time to be releasing a lighthearted fun overview on Thailand.

It came about through my ex-employer at a newspaper I worked for. He put my name forward to Tuttle Publishing, and it started from there. I contacted the publisher with a suggested layout, and topics, and after a little back and forth it was approved.

Thanks – yes, I knew from very early on, that the photographs were going to play an important part in the look and feel of the book. Tuttle Publishing’s graphic design team did an excellent job. After working as a journalist, and, through necessity, a photographer, I know what goes into making a decent-looking, interesting photograph, and what renders a photograph boring and formulaic.

So, very early on the in the process I began reaching out to professional photographers to see if they were interested in helping with the project. It was a truly international collective; many of the photographs were taken by me, but there are also photographs taken by a Bangkok-based Australian, Igor Prahin, a Bangkok-based Japanese man, Atsushi Hariu, and a Chiang Mai-based Thai, Gett Sutprattana.

In general, the photos supplement the text, but on a few occasions, when unable to get a particular photo I had in mind, I ended up changing the text to fit the photographs. 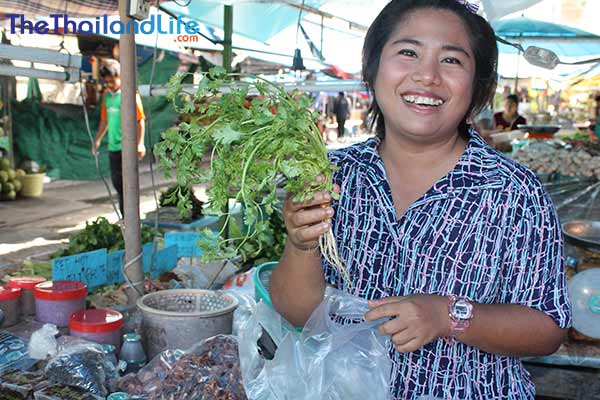 Just one of the many helpful, wonderful people Jody met during the research process

I like to think of it as following a thousand threads. For example, the arts section was one of the topics I was most interested in researching, but knew the least about. I did, however, have a few Thai artist friends.

So, it was a matter of talking with them, really, to find out which artists they were inspired by, and significant dates in the history of Thai art, special places, institutions. From there I started reaching out to different artists etc.

In a similar vein, as information on Thai literature was so sparse, I remember meeting, again through a friend, an elderly professor of Thai literature in a café and just picking his brain.

These days it’s all too easy to just rely solely on Google Research and leave it at that, but face-to-face interactions and information-gathering will always be far superior in terms of getting the whole picture, the whole gamut of colour and emotions on a topic. 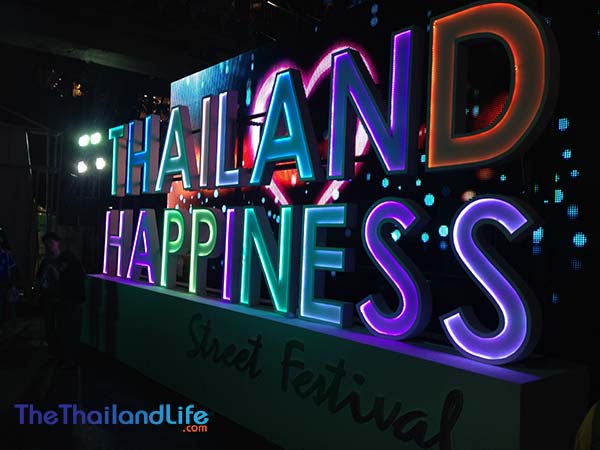 A sign seen in Bangkok a week after the military-coup in 2014.

What with so few ‘old’ pieces of Thai literature and documentation in existence, and with much of it of questionable provenance or neutrality, writing about Thailand from a factual point of view certainly adds an obstacle.

I tried to double check with multiple sources, when necessary, but much of the content and much of the filtration of that content is through my perspective, experience and opinion anyway. It’s just one geek’s experience of living and learning about Thailand. 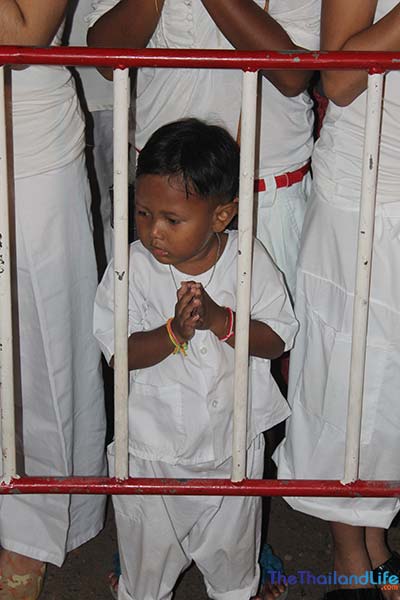 A boy wais at the Phuket vegetarian festival

It was difficult at first, knowing that I had to cover a particular topic within a certain word count (or 2-3 pages) to allow enough space for a nice number of photos. It was certainly a struggle with some sections, as there was just so much information. But I’ve worked as an editor for a newspaper before, so am familiar with layouts and the importance of pictures, and resisting the urge of just printing columns and columns of text.

Some chapters and sub-sections needed rewrites, and rewrites, and they were all the better for it. The music section for example, needed a complete rewrite at the publisher’s request to make it more accessible, up to date, modern and ultimately interesting. I got into a general rhythm, though, and after writing a few chapters I was happy with, I found attaining the necessary balance much easier.

A Geek in Thailand features many aspects of Thai culture; good & bad

I suppose it all depends on if it gets a second print run. But theoretically yes, absolutely, I’d love to write an updated one in the coming years.

I think Thailand, and its people, are going to dramatically change in the next 5-10 years, so an update will be almost a necessity. The nature of committing anything to print is that as soon as it’s on the shelves, you’ve already thought about five ways you’d like to tweak and update it. But that is also the great challenge of writing a book, a digest of sorts; that one needs to be very selective in choosing content that will be relevant at least for a few years. 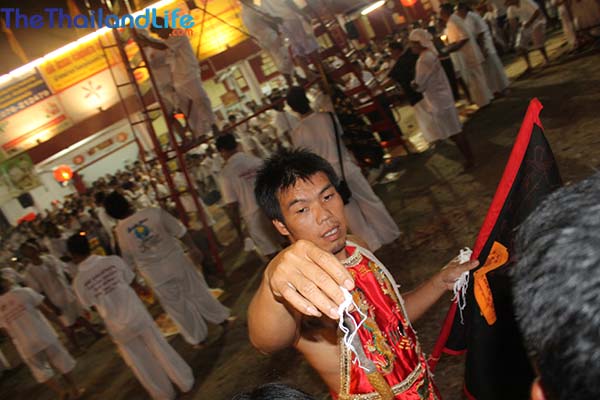 I suppose it was the discovery of the ever-present existence of a ‘calm in Thailand’s chaos’ that became apparent the more I researched and the more I wrote. From a need borne from living in close quarters with neighbours, to the functional architecture to deal with the extreme weather, there is an almost constant pursuit of living harmoniously within the Thai surroundings.

This is expressed in the art, the food, music, and traffic. At first glance, taste, listen, and look Thailand looks crazy and chaotic, but it works, thanks largely to a balance, and harmony, that must now be part of the Thai national psyche itself, to seek out and find a ‘calm in the chaos’. 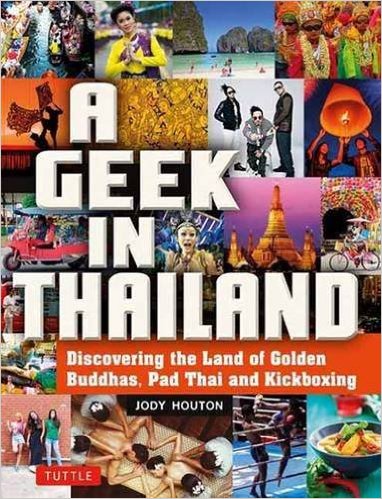 Writing, and as you mention in question six, deciphering differing information about Thailand was a challenge at times. But one of the most arduous parts of the project was in the actual logistics of getting everything together.

In a way, however, the difficulties of not receiving a straight answer, or getting conflicting information, ended up teaching me a lot inadvertently, so it was all worthwhile.

For example, reaching out to an ex-colleague to see if they could source a particular photograph, them agreeing to do it, and then effectively never answering a message or phone call to me ever again was head-scratching and infuriating at first, but allowed me an insight into ‘kreng jai’ and other aspects of Thai national character that I ended up writing about in the book.

Having to deal, and then attempt to rectify mistakes made by a copy editor was also quite stressful. It was all part of the learning curve, I suppose, and part of the process of having a book published. 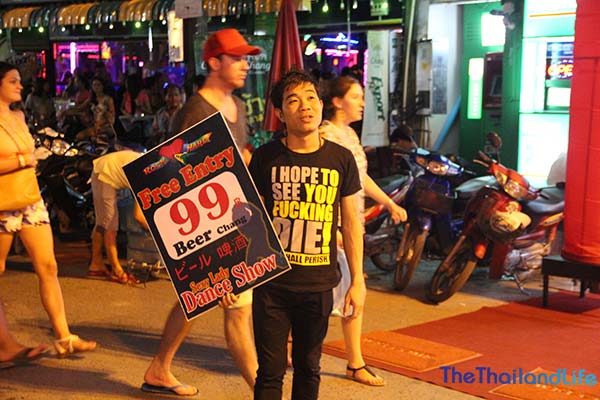 The paradise of Phuket has a darker side

I thought there’d be more groupies… No, but seriously, it was a hard slog. I’d like to think that if I’d have known how much time would have gone into writing, editing, selecting photos, sending emails, and the basic logistics of putting A Geek in Thailand together, then I’d still have accepted the project, but I’m not so sure…

But I don’t regret it at all, and much of the responsibility and expectations for the book I placed upon my own shoulders. I’ve written for magazines and newspapers for more than a decade, but the work, and ultimately the level of satisfaction, doesn’t really compare to writing your own book.

I’m currently editing my first novel, Outsider In; a book about a disillusioned English teacher who gets mistaken for a sort of Bruce Willis-type problem solver in Tokyo. It’ll hopefully be out sometime in 2017. It has been challenging and time-consuming in a whole different way from writing A Geek in Thailand.

A lack of clearly defined boundaries within which to write affords a liberating but at times aimless freedom when writing fiction, but it’s all good. I also have a few ideas for future novels that I’m looking forward to starting once Outsider In is out.

Thank you, Jody, for sharing insights on your book with us on TTL. I wish you all the best for the future.

Folks, A Geek in Thailand is out now on Kindle, and in a glorious Paperback edition (sitting right here on my desk) that features fabulous photography. Order it here on Amazon.