The Grand Palace scam is elaborate and cheeky. The nerve these guys have and the level they sink to is quite something.

But don't let this scam ruin what should be a visit to one of the most beautiful pieces of architecture you'll see in your life. Simply heed my advice. 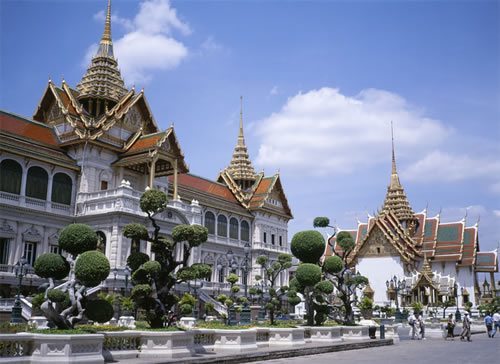 So there we were, fully stuffed from breakfast and just about over the fact that my newly arrived friend had been overcharged on a taxi meter by around 750 Baht.

“No worries”, he said, “Onwards and upwards”.

We jumped in the taxi and headed over to the Grand Palace, which I was sure would lift his spirits.

We pulled up, jumped out and avoided the immediate onslaught of touts babbling the usual “Where you go” .

In truth, I had forgotten which way the palace gate was, and ended up walking the long way around.

And if it's one thing about Bangkok that immediately lands tourists in front of the scammer radar it is not having a clue where they are going.

You become an instant target for scams, like the one I am about to reveal.

We were approached by a few guides along the way, all of who spoke very good English and seemed like nice guys (ahem).

Don’t be fooled, I thought, this is tourist Thailand now, not your friendly local shopkeeper in Nakhon Nowhere.

One guy approached us in a very cool manner and said:

The entrance is over there, but you can’t get in now. The Palace not open until 3pm because monk are praying. But you can go to….

He then proceeded to reel off the name of some other historical landmarks and something about getting a tuk-tuk.

On the way to the Palace we were approached by three more Thai guys telling us the Palace was closed today.

It would have been believable if the story hadn't evolved to:

It’s only for Thai people until 3pm. After 3pm you go inside, but now you go to….

Even a security (sort of) guard outside the Palace tried to stop us just yards from the door.

It was of course all bull****, yet very convincing for the unsuspecting tourists who were falling for it left, right and centre in front of our eyes, and no doubt missing the Palace visit altogether because it really does close at 3.30pm.

Had it not been for the variation between stories, it is very possible that we may have fallen for the scam, particularly because so many people were saying the same thing.

When we finally got inside the Palace and hired our long trousers, I spoke to one of the staff and explained the con that was going on outside.

Typically, she laughed and said; “Yes, it’s not true”. “I know that now I'm in here, but you really should do something about it,” I said in a firm voice.

It was at that point my mind cast itself back to last year when two friends visited from the UK.

I remember them saying to me:

Oh, we missed the Palace because it was closed until 3pm today, but a tuk-tuk took us to see some other sights and a gem shop.

Wow, I thought, the scam has been going on for some time.

With the explosion of YouTube over the last few years, stories of this scam have been popping up all over the place.

What happens is that you are loaded into a tuk-tuk and taken to a gem store. Visiting other historical sites may be included in the detour, but the primary goal is to get you to the gem store.

At this fairly posh looking place you will be politely pressured into buying precious stones and similar products.

The reason the tuk-tuk is s keen to get you there is because they get a tank full of petrol for the trouble.

The renumeration may vary. I mean, as we know it isn't uncommon for a tuk-tuk to receive 50-100 Baht from a restaurant or a bar or club for taking some tourists along, but information that I have come across suggests that they are providing the drivers with petrol.

In this regard, you can't really blame it all on the tuk-tuk drivers. They are just one link in the chain of the scam, and it is a way to fund free gasoline.

The touts outside the Palace act as caring tour guides of sorts and take tourists to the drivers, who then take them to the store.

The tuk-tuks get their commission regardless of whether someone buys something or not, so they are absolutely desperate to get you there.

You may also be taken to a suit shop, if you haven't already spent your life's savings in the gem store. But this would really depend on the temperament of the tourist and how pissed off you already are at having been taken for a ride, literally.

Afterwards, the driver may take you along to see the other temples or historical landmarks as promised; either way it's win-win for him because he makes money on the fare.

The really sad thing is that so many people miss out on seeing the Grand Palace.

The Grand Palace is something people tend to schedule in as a day trip. Most tourists only have a handful of days in Bangkok, and with so much to do, if you miss the Grand Palace on that day you are unlikely to go back – especially considering its fairly awkward location.

So while most people might not end up buying anything from the gem store, it is a mean scam because it wastes people's time. It's just an outright lie.

What I can't understand is that the Grand Palace clearly loses money because of this. Now surely they would not stand for that, what business would when they are losing revenue?

So one might assume that there is some collusion, perhaps some big boss operating it all and paying some kickback to the Grand Palace for the loss of business.

Surely not? I'm speculating here, but who knows, this is Thailand.

Take care out there folks. But don't worry. Now you know what to look out for, you can start planning your trip.