You are here: Home / Travel / Scams / Beware of the Big Bad Baht Scam!

Okay, so the title is a tad misleading, because it isn't really a scam in that someone is doing their utmost to rip you off, but I did get your attention, so now you're here, read on, as this may save you a tiny fortune…

The first time I came across this, I got caught out because I was quite simply unaware. After paying a bill in the hospital with my UK credit card, I looked down at my receipt and saw that I'd been charged in UK Pounds and not Baht.

On that receipt was also the exchange rate I'd been given, a whopping 4 Baht per GBP less than the going rate – I checked this against my bank's (UK) rate on other charges to my credit card that week.

Had I been charged in Baht, I'd have saved around 250 Baht. That's not a huge amount, but on larger purchases this would have a significant impact.

This was strange because I'd not been charged in GBP when paying for anything on my credit card before. And so I queried it…

The reception manager said the cashier should have asked me in which currency I wanted to pay before billing me. I guess she forgot on this occasion.

I put this down to a one off, but since that time the same issue has come up three more times and seems to be getting more popular.

For example, just recently I bought a new mouse from iBeat. On this occasion the lady did ask me whether I'd like to pay in GBP or Baht. I chuckled and said Baht. She chuckled too, indicating that she knew that I knew I'd pay less in Baht.

So what is this all about?

When you're in a queue and a cashier says “Baht or GBP”, the quick, natural thing is to say your own currency; it's a kind of auto-pilot thing to do. It's almost like your brain says, “Cool, I get to pay in my own currency in another country”.

But it's not cool. Because you lose out. Big-time.

When you look at your receipt, you are fooled into thinking that the exchange rate on your receipt is what you would have gotten whether you'd opted for Baht instead of your home country's currency anyway.

But that's not the case.

The exchange rate on your receipt is not what you would have gotten from your home bank once the amount was converted in your home country by your credit card provider. The amount on the receipt is the very low rate the Thai bank has given you on a conversion from Baht to your native currency.

For example, look at the receipt below from iBeat. If I had accepted my home currency, I'd have been given an exchange rate of 51.32 Baht. As it was, being in the know, I chose Baht and my credit card company converted it at 54.56 Baht to the Pound at the other end. So I paid 41.97 GBP instead of 44.62 GBP, as it says I would have done on the receipt, had I chosen to pay in GBP. 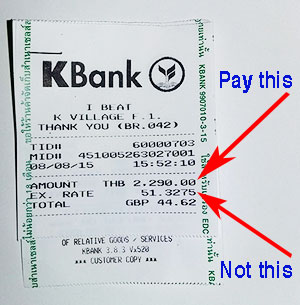 But here's what I am having trouble working out. Who profits from this?

Surely the shop don't make anything because the bank just pays them the price in Baht. So is it the bank that makes a profit by pocketing the difference between the exchange rate they give you and the real exchange rate in Thailand at the time of purchase, which is much higher?

Perhaps someone can enlighten me on this in the comments section.

All I know is that it doesn't pay to NOT pay in Baht. I know it's not really a scam because 9 times out of 10 you will be asked first, so it is technically a personal choice, and the cashier isn't out to fiddle you  (oo-er missus!) But I do think there is a lack of awareness about this and there ought to be more transparency.

So, when asked if you want to pay in Baht or your native currency, make sure you say Baht. And if you aren't asked, it would be worth making sure the transaction is about to processed in Baht before it goes through and can't be refunded.

**UPDATE: I was caught out again yesterday in Tesco. The reason I fell victim was because I'd been in there the day before and paid by credit card in Baht. But when I went back the next day, I paid, looked down at my receipt and the cashier had given me a rate of 53 Baht to GBP when the actual rate was 56! Below the conversion there was a 3% charge.

I immediately asked to see the manager. She apologised and said the cashier should have asked me first. But that's the point. I never have been asked in Tesco before, and therefore never had a reason to check my receipt.

So why is this suddenly happening everywhere? Are these innocent mistakes? Or does the weak Baht and falling tourist numbers have something to do with it?