Last summer, the rise of the Zika virus in South America made residents and tourists alike uneasy.

Concern spiked when cases of Zika started to appear in the southern regions of the United States, but since then, the virus has gone global, spreading through Central and South America to Central Africa to West and Southeast Asia.

Though the likelihood of contracting the Zika virus in Thailand is rare, in September, two babies born with the microcephaly birth defect had been identified in the fall of last year.

While those traveling to Thailand are likely to be unaffected by the risk, pregnant women, or those women planning to get pregnant, should certainly consider the information below before boarding a Thailand bound plane. 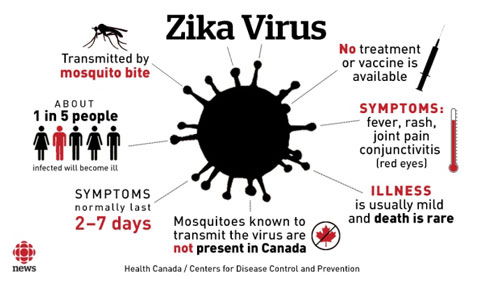 What is Zika Virus?

Also referred to ZIKV, the Zika virus can be classified in the Flaviviridae family of viruses. Zika is spread through mosquitos, specifically Aedes mosquitos like A. aegypti and A. albopictus.

It can also be spread sexually, from partner to partner, if adequate protection is not used. It originated in Uganda- Zika Forest- explaining its name. Zika is also closely related to other tropical fever diseases, namely dengue, Japanese encephalitis, West Nile and yellow fever.

What Are the Symptoms of Zika Virus?

While the majority of those who are infected with Zika do not have any symptoms (asymptomatic), some may experience side effects which will manifest between 3 and 12 days after an initial infection.

These symptoms will probably include pinkeye, vomiting, headache, mild fever, muscle and joint pain, malaise, sensitivity to light, skin rash (red blotches on neck, arms, chest, face) and abdominal pain, constipation and dizziness. The illness and symptoms generally clear up in a week.

For pregnant woman, Zika infections can lead to microcephaly, a birth defect that results in brain abnormalities. While not completely confirmed, scientists’ findings suggest that the Zika virus attacks crucial stem cells while the fetus’s brain is still developing.

How Big is the Risk in Thailand?

Though the risk of contracting Zika is somewhat moderate in Thailand, the United States’ CDC recommends that “women who are pregnant [should] not travel to Thailand.”

The CDC also states that “all travelers should strictly follow steps to prevent mosquito bites and sexual exposure to Zika virus during and after the trip,” but places less restriction on travel for them as Zika rarely has serious symptoms for those who are not pregnant.

How Many Cases Have Been Confirmed?

As of November, Thailand’s health ministry had found 33 new cases of Zika.

Thailand was also the first country in Southeast Asia that had a confirmed case of microcephaly (September 2016) and the Kingdom currently leads the Southeast Asia region with the most cases of Zika. In 2016 alone, the Thai ministry of health reported about 700 cases of the virus.

Noting that the cases of microcephaly did not occur in Bangkok, the Department of Disease Control confirmed two cases of babies born with deformed brains in September of 2016. At the same time, the WHO urged Southeast Asian countries to more effectively ‘prevent, detect and respond to Zika virus transmission.’

Again, the total number of cases of Zika in Thailand is an unconfirmed total, but numbers for 2016 suggest that it may have surpassed 700. Thailand is the leading location in Southeast Asia for the Zika virus, so it’s possible that 2017 will yield greater numbers of infected tourists and Thai residents.

Update: In July 2017, the Department of Disease Control confirmed 11 new cases in Pichit, a northern province approximately 330 kilometres from Bangkok. This takes the total to 81 confirmed cases since the start of the year.

What Areas Are Most Affected?

According to research published in the American Journal of Tropical Medicine and Hygiene in late 2015, the threat of contracting Zika in Thailand is not relegated to a specific area. Instead, it has “a widespread distribution,” making most- if not all- areas in Thailand risky for pregnant women.

Thailand’s large cities, like Bangkok, have also been affected. Recent reports have shown that around 30 cases of Zika virus have occurred in the sprawling city of Bangkok. Considering the metropolitan area has a population of 5.7m, this still represents a small risk.

Who is at Most Risk?

Anyone who visits Southeast Asia and Thailand is at risk for contracting the Zika Virus through mosquito bites and potentially through sexual contact. However, the only true ‘at-risk’ population is that of pregnant women.

Pregnant women should avoid countries where the threat of Zika is known because of the risk of microcephaly. Non-pregnant women who have visited Zika prone areas should wait at least 8 weeks before attempting to conceive.

What Does the World Health Organization (WHO) Say?

While many health agencies point to the danger of contracting the Zika Virus in Thailand, the public health ministry has downplayed these fears. Though the WHO declared the spread of the virus an ‘international emergency,’ Thailand’s reaction to this scary statement was a calmer approach that suggests WHO is somewhat scaring people.

The Ministry of Public Health reportedly responded that; “Thais should not worry. Thailand has no outbreak of this disease,” a statement that is in marked contrast to the nearly 700 cases of Zika that were identified in 2016.

Somewhat alarming is the fact that Thailand had not- as of September 2016- updated a Zika prevention and control plan.

Further evidence of the ministry of health’s dismissiveness is shown by the unwillingness to identify the provinces where most Zika cases had been reported, a move to preserve the tourism economy of individual provinces and to stave off fear that may slow or even halt the influx of tourists to the country.

The Thai government is trying to mitigate risk in heavily populated areas by increasing insecticide spraying around areas that may attract mosquitos.

As for the WHO (World Health Organization), little definitive information is listed, although the website does state that there have been no mosquito-borne Zika virus infections in the past week in Thailand and that an initiative to monitor the prevalence of microcephaly was put in place in February of 2016.

Overall, the WHO notes that the global risk assessment has not changed, but did try to imply that more pressure needed to be placed on Southeast Asian countries, who the WHO does not believe is doing sufficient work to curtail the problem.

WHO did, however, laud Thailand’s spraying efforts, noting that the Kingdom’s “diligence underscores the commitment of health authorities to the health and wellbeing of the Thai public.”

Is There a Vaccine or Cure?

There is no treatment or medication for the Zika Virus, as the symptoms are generally non life threatening and can be alleviated by rest and supplementary medicine for aches, pains or fever.

A vaccine for Zika does not exist, though doctors and scientists hope that the efforts to formulate one are forthcoming. Realistically, is not expected that a vaccination will be ready for market in the foreseeable future.