Visa runs for me are a blessing and a curse.

On one hand they push me to see other parts of Asia I might otherwise find excuses not to see, and on the other hand they often pop up at a time when I am too busy to travel or have just come back off of another trip.

But hey, having a holiday every three months, even if it is just over the border to Laos for a few days, is a treat, and one of the necessities of having a yearly Non-Immigrant ‘O' multiple entry visa.

I've pretty much seen it all in Thailand.

Seriously, I have been in some close shaves, and met some crazy people doing crazy things along the way.

One crazy thing I have encountered numerous times is foreigners using a fake visa stamp. Actually, in some cases it is a real stamp, but fake in the sense that it is illegally obtained.

I have met many people over the years who thought I was silly for complying with the rules, I quote: “Why don't you just pay for a stamp instead of leaving the country”?

“Because I don't want to risk the chance of deportation”!

One guy I met in Bangkok hadn't been out of the country for over 3 years. He just drops his passport at a travel agent and they “get it sorted” for him.

Admittedly, this practice is no where near as common as it was 10 years ago, largely because immigration has been through many changes and the hand of corrupt officials has been slapped by better regulation.

But nevertheless, it is still possible and people still risk it. 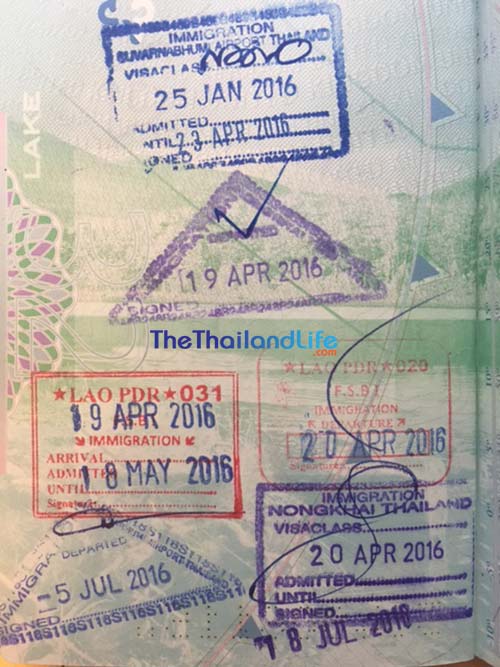 How to Get An illegal Visa Stamp

Let's say that like me you have a Non Immigrant O visa. For a small fee, a dodgy agent will take your passport off somewhere, stamp it with a 3-month re-entry and deliver it back to you.

Basically, when a visa run minivan goes over the border, the contact will give your passport (among others) to a “friend” at immigration and get your stamp – for a fee of course.

You don't even need to get out of bed.

For a bigger price, you can even get a Non O visa without leaving the country, or a tourist visa for that matter.

When I arrived on Koh Samui in 2008, this practice was rife. I actually felt in the minority for doing legal visa runs, at least among one particular group of guys I knew.

It was tempting, but I just wasn't prepared to risk my future here. And I'm glad I didn't because a friend ended up getting caught.

If this story doesn't deter you, I don't know what will!

Caught with an Illegal Visa Stamp & Extorted By Local Police

Most illegal activities like this that involve corrupt local officials come unstuck when a legit senior officer takes up a post in the department and uncovers the illicit dealings.

This usually results in people being “moved to an inactive post”, sometime after the media has exposed it.

In some cases, the new senior person will simply cut out the subordinates and take the cash himself, or demand a big piece of the pie to keep the racket going with the existing members in place.

Either way, whether the racket is cut down or kept going, there is usually room for some extortion along the way, which is what happened to a friend of mine.

My friend had been getting visa stamps through a local visa run company for two or so years. He'd give them the passport and get it back after 48 hours or so. Easy.

But then the person running the visas to the border got caught by local police. To save himself and bargain his way out of it, he gave up the information of his foreign clients.

Now, this was gold dust for the police. They now had a bunch of “farangs”, presumably some of which had some money in the bank. caught red-handed with illegal visa stamps.

One day, two policeman visited my friend at work and requested that he go get his passport and accompany them for some lunch.

At lunch, they took his passport and said that to avoid being arrested he would have to pay them 300,000 Baht to destroy the passport and evidence of the dodgy visa.

He managed to negotiate the price down to 200k. Two other guys he knew weren't so lucky; they got banged up and readied for a court hearing.

To their credit, it seems they did destroy the passport, or sell it maybe.

My friend moved away from the island though, as he knew that he'd forever be in their debt. They could always come back for more cash, if they needed it.

He called his embassy and said he'd misplaced his passport. They issued a new one and that's where the story ends.

Don't Be An Idiot. Always Stay on the Right Side of the Law

Is it really worth getting an illegal visa stamp for the sake of taking a one-day trip out of the country?

This is actually a serious crime. Why? Because a Thai visa is issued by The Royal Thai Consulate, which means you are effectively committing a crime against a Royal institution. I dread to think what the ramifications of this could be.

My advice is to just play by the rules.

Living in Thailand is pretty easy. Sure, immigration is a hassle: documents, reporting, visa runs, queues, etc., but why not do an easy visa run like the one I wrote about here?

You might think you are in with “the mafia”, so to speak, as they take your passport and money and give you a nod, but when that guy gets caught and is asked to give up names to get himself off the hook, do you think he will think twice about giving yours?

Rackets like this only run for as long as the necessary dodgy people are in their departmental posts. Once they are caught and ousted, an investigation ensues and someone's head has to roll.

And let me tell you, it won't be the guy taking your money who will go to jail, it will be the “stupid farang” that gets the blame, and possibly extorted for money like my friend did.