You are here: Home / Learn Thai - Fast / 6 Reasons You Should Learn To Speak Thai 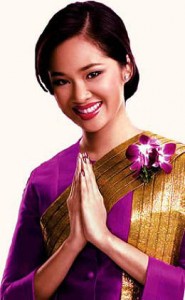 It’s a strange phenomenon; many of my fellow countrymen would complain ardently if a foreigner lived in their country and didn’t make an effort to learn the language, yet don’t seem to care two hoots about learning to speak Thai when living in Thailand.

I have heard many an excuse, and while I myself am not fluent in Thai, I do make an effort to put time aside to learn, and also to put my study into practice in everyday situations.

If you plan on living in a country, plan on having a girlfriend from that country, and plan on being accepted by the people of that country, surely it is imperative that you learn the language to at least a basic level of understanding?

So here's my tuppence! Based on personal experience, here's 6 reasons why I believe it is important you learn to speak and read Thai.

Learning Thai helps you better understand the culture. For example, the way Thai people talk to each other, the colloquialisms they use, the way different objects are classified, and the way in which people are addressed. Through simple phrases you will start to understand basic aspects of the culture, like grengjai (being gracious), kwharm ben Thai (Thainess or Thai style), mai pen rai (never mind/it's ok/no problem), and even som nom na (serves you right).

You will understand minor things that make a big difference, like the fact that it is okay to refer to another person’s child as your own (luuk), or other phases like lok son dua (being happy with your own company). The list goes on, and I’m sure you get the picture. The more you pick up the more you will understand Thai people, and easier you will find it to integrate into a community, enabling you to make Thai friends and understand local lingo.

2. Communicate Effectively With Your Thai Partner

Recently I arrived in the UK with my partner for Christmas, and while she can speak an adequate amount of English to get by and converse with my friends and family, it has proven very useful for me to know enough Thai to be able to fill in the gaps when she doesn’t understand colloquialisms, and of course those English peeps who mumble out the side of their mouth at 100mph!

Okay, so my Thai isn't perfect, but I can get across what I need to say and sort out any confusion. I think it is important in a Thai-foreigner relationship for both parties to try and learn each other’s language. The onus shouldn’t be left on the Thai partner to learn English without the foreign partner also participating in learning Thai.

In my opinion, as a partner, out of respect and an interest in your partner’s culture, learning Thai should be a want rather than a chore. Miscommunication is often the cause of arguments, the cause of offence and sadly the cause of breaking up. Going the extra mile and learning the language can save a lot of stress and unhappiness.

3. Stop Yourself Getting Lost!

I will never forget the time I headed up country on a road-trip with a friend in a hire car. Just follow the map we thought, easy peasy. It was 2 AM and were still trying to work out road signs without an English-speaking person in sight.

Okay, the major towns were signposted in English, but off the beaten track was mission impossible. Point is, had I known the Thai alphabet, I could’ve gotten us around with relative ease. Moreover, if my Thai was better back then, I could’ve understood the directions given to us at the numerous petrol stations we tried for help.

Living in a foreign country with a completely different alphabet can make life difficult in a number of situations, like reading ingredients on food packets or understanding shop opening times.  Imagine if there is no male/female sign on a toilet; would you know how to differentiate male-female toilets in the Thai Alphabet?

Do yourself a favour and take a day to learn the Thai Alphabet. You might want to check out this book I used which costs $19.99. I also have some fantastic language cards I use regularly as a refresher. Each one has the consonant or vowel with a phonetic translation. A friend bought them for me, so I will need to find out the source and get back to you on that.

Thais and foreigners making friends…is this possible? I've seen some silly people saying “No!” On certain forums. But I say, “complete rubbish”! One of best friends is Thai, and we have been friends for 5 years now. And, shock horror, she is female! And no, we have never had anything romantic going on.

Anyway. Many Thais have a basic grasp of English, and some speak English very well, so showing an interest in the language is a great way to establish a friendship. The old “you teach me Thai and I will teach you English” approach is common ground for a friendship to develop.

I might get blasted for saying this, but generally, guys I meet are only experiencing talking to Thai people (women) in bars and Thai massage shops, rather than meeting people from a diverse range of backgrounds as you would back home.

Contrary to popular belief, there are millions of Thais who would love to talk more with foreigners, with the possibility of being friends. Learning some Thai is a great way to open up this opportunity.

5. Increase Your Chance Of Employment

While the West, Europe in particular, is on the decline, South East Asia is booming, and as such there are an increasing number of 20 and 30 something foreigners emigrating to Thailand, many of whom are seeking, or will seek, employment at some point.

On more than a few occasions I've had conversations with foreigners who are convinced Thai people are constantly talking about them in their presence.

Well, guess what? Time to learn the language and stop the paranoia! I say paranoia, because aside from the odd joke, I doubt much, if any, of the talk is offensive, or at least isn’t meant to offend. However, I agree, hearing the word “Farang” followed by some mumbling and laughter as you pass by can be pretty jarring, particularly when you hear it every day from the same people. Wouldn’t it be nice to know what was being said? It is possible, you know…

If you're on a budget and can't be doing with school classes, I highly recommend ThaiPod101.  It's free to register at a basic level, and totally worth joining.

In the meantime, why not crack on with my free video lessons. Click here to start lesson 1.