You are here: Home / Learn Thai - Fast / How to Write Your Name in Thai & Everything You Need to Know About Thai Nicknames

One standout cultural difference between Thailand and the West is ‘names'.

If you have spent time in Thailand you will have noticed that some Thai names are often quite long, that most people don't use their birth name, that most people have a nickname, and that many people adopt Western nicknames.

In fact, the whole naming culture in Thailand is very interesting.

Learning to write your own name in Thai is also a good way to start familiarizing yourself with the Thai alphabet. You can also adopt a Thai nickname if you want.

In this post I'll look at how the most common Western names are written in Thai, and explore nickname culture –  both past and present.

I also give you some tips on how to start writing Thai. It's not as hard as you think.

By now you may have noticed that Thai people generally don't use their birth name, but rather a nickname.

This nickname is usually adopted from a young age may be given by parents or other family members, friends at school, or simply adopted by the person themselves.

A Thai person may also adopt a Western nickname if they go to study or live abroad.

Thai names are often quite long and therefore a nickname is easier. My wife's name is 15 letters long, so her nickname is a blessing!

Nicknames can also be used to describe a person's personality and nature. Nicknames are also fun, thus the word for nickname in Thai…

The word for nickname in Thai is ‘cheu len‘. The literal translation is ‘name play' (len = play), but Thai uses the word order ‘noun adjective' instead of ‘adjective noun', therefore the actual translation is ‘play name'.

Your real name is classified as ‘cheu jing'

Even King Bhumibol Adulyadej had a nickname. His nickname was Ong Lek (องค์เล็ก); Ong is a numerative noun for kings, princes, princesses, priests, images of Buddha, gods, angels, palaces and pagodas, and “Lek”, as you may know, means “little (one)”.

Up until 10 to 20 years ago you would hear the same nicknames over and over again. People tended to adopt nicknames that represented aspects of nature such as cute animals or flowers and other nature inspired things.

In modern times the kids are getting more creative. I've heard everything from a boy named ‘Google' to a girl named ‘Babe'. My niece has a friend called ‘cartoon' (การ์ตูน)!

A number of today's nicknames are Western influenced.

Here's Thailand's Top 10 most common Thai nicknames, as surveyed by the The Ministry of Culture:

Perhaps the most out there boy's names I've heard are ‘status' (สเตตัส) and ‘airbus' (แอร์บัส).

I recently heard the name ‘Cream' for a girl, too. 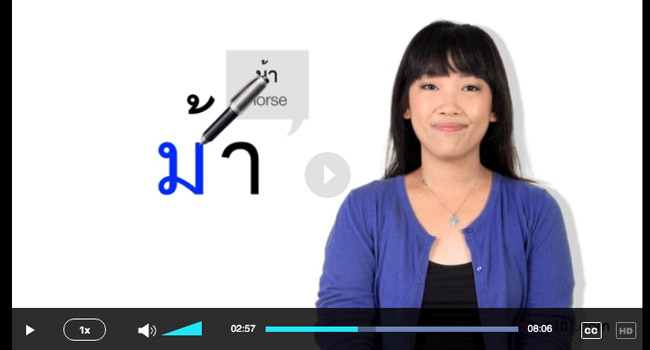 Creating Your Own Nickname

So you can give yourself any nickname you want. The only real requirement is that you make it very short, and inoffensive.

But then if your name is short already, like mine (Peter),  then it kind of defeats the object.

If I had to choose one I'd probably go for something like ‘music', or something really silly like ‘wolf'.

What About Thai Surnames

Surnames have only been legally required in Thailand since 1913, when a law was introduced by King Rama VI (King Jajiravudha) that made it mandatory.

You'll notice in Thailand the surnames are only used for official purposes and when times are referring to others they will use the prefix Khun followed by the person's first name.

You may occasionally come across a Thai name sounds rather funny, like the name ‘Nan', which whenever I see written reminds me of my late grandmother – when Thais say it's actually pronounced Naen.

How to Write Your Name In Thai

Below I have written out some common boys and girls names in Thai. If your name isn't listed, leave a comment and I will try to add it to the list.

Please bear in mind that there will be more than one way to write your name in Thai, and this is because Western words and names don't always translate exactly into Thai script.

Moreover, the way Thais pronounce Western names isn't exactly as they are spoken in English. For example, Denise would be pronounced  and therefore written Dee-nit.

The easiest way to write your name in Thai is to find a Thai letter that corresponds to the pronunciation of your Thai name. 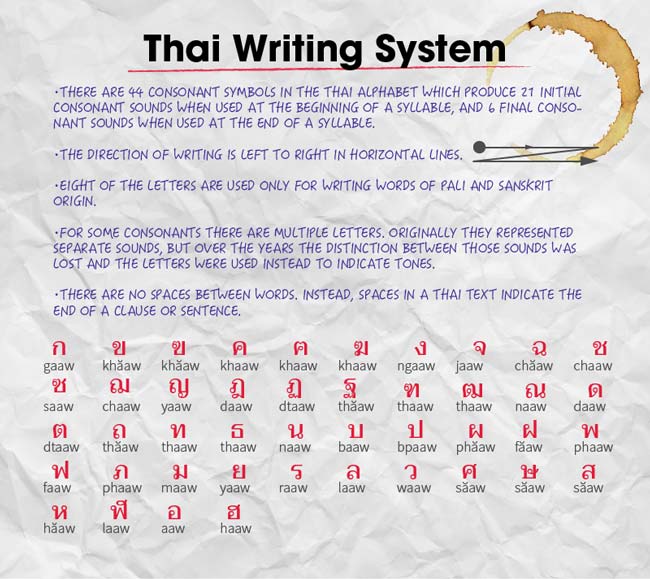 How to Start Learning to Write Thai

If you want to learn  how to write your name in Thai  then you will need to start learning to write Thai. This can seem not an overwhelming task considering that there are 44 consonants and 32 vowels that look completely different to the alphabet that you are used to.

But don't let that put you off. You can start learning to speak and write Thai very easily.

I recommend learning one word per day and learning to write one letter per day. This might seem like a slow way to learn but you will quickly realise that actually you can increase this to 2 or 3 words a day once you start becoming familiar with the language.

You don't need to learn to write Thai to speak Thai, but of course in the long term it is going to be very useful.

There are a number of foreign nationals living in Thailand who can speak Thai conversationally but can't read Thai because they have learnt Thai from everyday interactions and from their partners. However I recommend learning to speak Thai and practicing your Thai alphabet on the side.

Get as much conversational practice in as you can while slowly learning the consonants and vowels too.

The way I learned the alphabet was to write one consonant per page on a notepad. Then I would look at each page, close my eyes, say the name and visualise drawing the symbol. After a while I was able to say a letter and then draw it.