Isaan refers to Thailand's northeastern region, the largest area of Thailand. The word is also sometimes spelt Isan or Esarn.

The reason for its separate identity is a history of war and people displacement. Without delving too far into the history here, see Wikipedia for that, many of the people in this region are of Lao ethnicity.

The primary reason for this is the failed Lao Rebellion of 1826, after which mass forced population by Siamese forces took place and thousands of ethnic Lao were transferred to the area.

Of course, in the modern day not all people living in Isaan are of Lao ethnicity. Indeed, many living in the Isaan provinces that run along the Cambodian border – Buriram, Surin, and Sisaket – are of Khmer descent.

Furthermore, there are many people of Chinese descent, and those who have migrated to the northeast in decades past. However, as a rule of thumb, the closer you get to the border of Laos in Nong Khai, the more true Khon Isaan (Isaan people) you are likely to encounter.

That said, the entire region – including Laos, Burma, and Cambodia, Malaysia, and Indonesia – is quite a melting pot, and, when you try to work out who originally came from where, many theories arise, as I wrote about in my Origins of Thai People article. 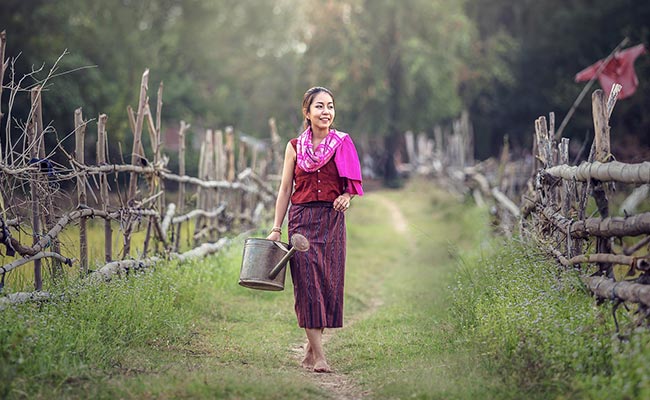 Isan is best know for its agricultural land and rice farming.

The people of Isaan (generally) speak Thai-Isaan among each other. People often confuse this with Laotian, which it is derived from but not identical. Unlike Thai, there is no official Isaan script.

This isn't unusual in Thailand. In fact, there are many different regional dialects of Thailand. There is the northern Lanna dialect, which is also closely related to Lao, and a number of tribal dialects from the same region. There is a southern dialect, too, all of which differ from the central Thai spoken in Bangkok.

Most Khon Isaan are able to switch between Thai-Isaan and Central Thai fluently, depending on with whom they are speaking with.

Academics often refer to people from this region as Thai-Lao, although the stigma attached to this label in Thai society means that most refer to themselves as Khon Isaan, or simply Thai.

Some older Isaan folk take pride in their Lao heritage and identify as such, while the younger generations, having grown up in a very different time, generally don't feel the same affiliation.

You'll come across many people from Isaan in Bangkok, because they migrate there for work as taxi drivers, food sellers, restaurant staff, and manual labour jobs.

The provinces of the region are historically poorer than their Southern cousins, with infrastructure and education behind other areas of the Kingdom.

That being said, the region has come a long way, and those who live in, or close to, the cities of Issan, will attest to the huge development and improvements to quality of life that have happened over the past two decades.

So, how do you speak Thai-Isaan? And is it drastically different from Thai?

Let's have a look at some common words and questions.

You can copy and paste the Thai script into an email or chat app to impress your Isan partner or friend. To better understand pronunciation, I recommend copying and pasting the texts into Google translate, though you'll find the phonetic versions below quite accurate.