You are here: Home / Visa Stuff / My Comical Stay At The Inter City Hotel (Vientiane)

For those of you who've seen the 70s British sitcom Fawlty Towers, set in a Torquay hotel, you'll already have an idea of what to expect from this post.

My stay at the Inter City Hotel was painfully comical, and not at all what I expected.

I've been to Luang Prabang, which is beautiful, but both times I've planned to stay in Vientiane have been cut short, once due to work commitments and the other because my travel buddy wanted another night in Udon Thani instead.

And so both times I stamped in and came straight out. This time, however, nothing would stop me. I was fully prepared and really looking forward to getting there.

The Journey to Vientiane

I took the Nok Air Fly n' Ride service, which was efficient, comfortable and very affordable at just 1,300 Baht each way.

Being the only person catching the ride over the border, I had the privilege of a limo people carrier to myself. Sadly, though, as I pulled up in diplomat-like style outside the hotel,  I realised I'd been duped by the old online hotel picture scam.

The hotel looked like it was ready to be torn down, rather than the elegant city homestead I'd observed in the online oasis. 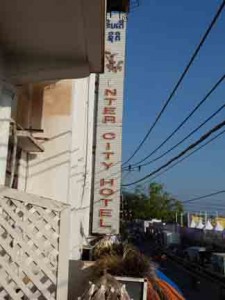 Conned by the Online Oasis

I was a little gutted because I'd spent an hour and a half on Agoda (which I usually have good luck with) looking for hotels and carefully reading reviews and making comparisons.

Okay, so $50 isn't much for a hotel, but i'm not too fussy: clean, simple, fairly modern and friendly is enough for me. This hotel had a rating of 7.9, which I am now convinced was manipulated in some way.

Later I'd regret my decision upon seeing what I could've had for the same price just around the corner. For the record, The Inter City is probably worth $20, but I thought I was booking a $50 hotel at a discounted rate.

Anyway, how bad can it be? I'm sure it's lovely inside, I thought.

The lobby of the Inter City Hotel is adorned with traditional furniture and historical relics, and is pleasant enough, if not somewhat dingy.

Granted, the building is old, but grubby walls up the staircase and the obvious presence of dust makes it feel more like a haunted house than a classic building garnished with historical artefacts.

I checked in and was told I'd been upgraded to a balcony room at the front. Brilliant! Bonus. Things were looking up. I was then told to go to my room. No one offered to carry my bag up, but I was told I could use the lift, and hey, no worries, I got upgraded!

As I entered the room, my jaw dropped , “If this is the upgrade…”.

The patio style dooring that opened onto the balcony was so shoddy that every noise could be heard from the gaps at either side where it didn't shut properly. Moreover, I didn't dare step on the balcony which looked like it might fall through, and like it hadn't been cleaned for ten years.

As I ran my finger across a half inch of dust on the lamp on my bedside table, I felt hot and decided I needed some cooling down. Oh wow, I said out loud, again. The air con unit had no remote, and just three wall settings: noisy, very noisy, and make you want to rip it out of the ceiling noisy.

Other notable room features were a non-working safe, a burnt-out plug socket, curtains that didn't fit the window space properly and a broken shower hose.

My favourite, however, was the door that joined my room and the room next door. It was five times thinner than the wall so I could hear every fart and whistle. The entire time I had this feeling that someone might walk through naked and say, “Oops, sorry, thought this was the bathroom”.

Oh well, at least I have WIFI, I thought.

No I didn't. The WIFI only ever worked intermittently, and to get any real connection you needed to be in the lobby.

After the first night of noisy air con and the funfair and market that boomed music until the early hours outside my window (I'd arrived during a festival of sorts), I was tired and not happy. I needed food!

My first trip to the restaurant resulted in me waiting five minutes to be offered a menu, and I couldn't wait to escape the dingy, dark area with those horrible ancient air con machines drafting up my nostrils.

I had another 3 nights left, and moving hotel was on my mind- big time. But, I thought, don't be a misery, make the best of it: the bed is comfortable and at least three out of twenty odd staff look like they actually want you to be there. So I thought I'd give it one more night.

Bugs in the Whicker Chair

The room was way too hot to sleep in with the air con off, so I suffered the grinding machine. I got little sleep and woke with a sore throat and cough; a sure sign it hadn't been cleaned in yonks.

I made my way to the lobby and thought I'd get some work done there. I lounged back in an old whicker chair and began surfing the web.

After a few minutes I felt tingling under my left arm, which was resting on the arm of the chair. I lifted up my arm to find three tick-like creatures crawling on me. “What the F***”, I exclaimed, as I jumped up. I looked deep in between the grooves of the weaving and the chair was alive with these things. I'd never seen anything like it.

By now it was day three, I was seriously lacking energy having fallen a little sick, and lugging my stuff to another hotel seemed a chore. I spoke to a friend in Thailand who told me to chill, get a massage and enjoy the ambience.

I said I would do my best. I took a more light-hearted view and did my usual mindfulness thing of thinking that “I'll never get these moments back so I'd better at least try and enjoy them”.

I chuckled a little and wondered what else might go wrong at Fawlty Towers, and marveled at how such a poorly run, poorly maintained establishment could stay open this long and make money.

Air Con Maintenance…all Over my Bed

I decided to solve the air con issue by asking for a fan. I asked at reception and they said they'd sort one out. I got a call to my room ten minutes later telling me that a fan had been assigned and, “Do you want to come and get it…..(I went silent)….or do you want someone to bring it up?”

Is this even a hotel? Am I imposing staying here, I thought. There's always two or three strapping young lads on reception, yet they expect me to come and get it, and worse still, they made a female co-worker lug it up the stairs.

Right. One more night to go and then back to Thailand…

I went down for some lunch, but then randomly popped back upstairs to my room for a loo break. As I went in, a guy, accompanied by the two cleaning ladies, was attacking the air con unit, cleaning all the dust out over my bed.

I  shook my head, and said in Thai (because I don't speak Laos), “Please open the door when you're doing that”. It was the final nail in the coffin. Why not clean the air con before a guest comes, not let all the dirt, dust and germs out in his room while he still has a night left.

I think that maybe, from the constantly displeased look on my face, they'd worked out that I might leave a bad review on Agoda, and thought they'd at least better make an attempt to fix the air con.

All Said and Done

It's been a comedy of happenings. I guess it's almost funny. I think the hotel gets enough unwitting foot traffic business to not care if people enjoy their stay.

The staff seemed oblivious to problems and complaints, and no doubt they aren't paid enough to care. In the time it took me to pen this post, sitting here in the lobby, one couple and a single male traveler have checked out and asked for their money back.

For this hotel it's 50-50: some people will lump it and others will complain and leave. As long as they make bank, who cares for repeat business – the place has probably made its money back a thousand times over by now anyway.

But, Will I Come Back?

It took me so long to finally get to Vientiane, and the Inter City Hotel really spoiled the excitement. There were some highlights, though. I took some lovely walks along the river, and I had a few nice conversations with Laos people.

I got some awesome sunset shots on the camera, and I had a lovely meal at a Laos restaurant. I also bought a cool t-shirt.

I must add that between the two main tourist destinations in Laos, Luang Prabang is the place to go. All said and done, however, I will give it another go, one day, but this time in one of the hotels I've noted in my pad since being here.

I'll also add that on the morning of my departure the WIFI was working well. I hope they've remedied this for other guests.