You are here: Home / Travel / Wat Arun: A Complete Guide to the ‘The Temple of Dawn’

Wat Arun is a famous Buddhist temple in Bangkok. Commonly known as ‘The Temple of Dawn', it was built in the 17th century and named after the Hindu God Aruna.

The distinctive spires or pagodas (called ‘prang') were built in the early 19th century and are encrusted with porcelain and seashells.

The spires stand over 200 feet high. In the center, the spire is topped with a trident that features seven prongs and is often referred to as the Trident of Shiva.

The grand pagoda is surrounded by four smaller ones and each has beautiful characteristics such as guardians facing all four directions. 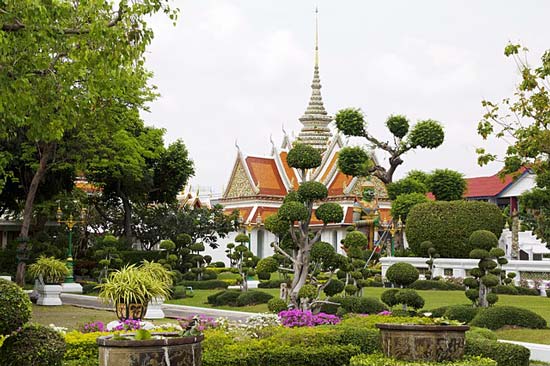 During the Ayutthaya era (1350-1767), ships would sail along the river and stop at the junction near the temple to refill their supplies. Here the sailors would worship and pray in front of the temple.

It is thought that King Taksin would visit the temple at dawn, prompting the name to be changed from Wat Makok (or Wat Makok Nok) to Wat Chaeng, its local name.

However, it underwent an in-depth renovation on the spires from 2013-2017 when the broken tiles were replaced and many surfaces were refinished with plaster to replace the cement from previous restorations.

Now the temple sits majestically on the bank of the river, catching the light and glistening in the sun.

It is one of the most iconic temples in Bangkok and even appears on the back of the 10 Baht coin.

What to See at Wat Arun

There is plenty to explore at Wat Arun.

Visitors can climb the central spire but should be cautioned that the steps are steep and narrow. It can be challenging going up and coming down but the views are often worth it.

There is also a crown at the top that was put in place by King Rama III.

Bring some binoculars and a camera to see even further and try to identify the landmarks around the city.

Look for the sculptures of animals and Chinese soldiers around the base of the central spire. Inside the temple, there are many Buddha murals which tell the story of his life. 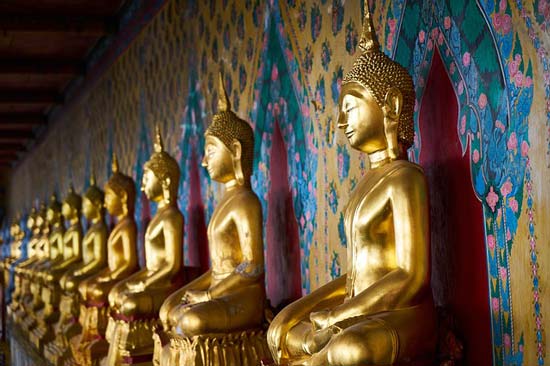 There is also a Buddha statue in the Ordination Hall, supposedly designed by King Rama II himself and rumored to have some of his ashes kept underneath.

On one of the terraces, there are four statues of Indra, the Hindu God, located near a three-headed elephant.

Located on the side near the river are several pavilions with Chinese style architecture.

Cameras are allowed inside Wat Arun so make sure to take plenty of pictures to remember your visit.

Outside of the temple, the grounds house several small buildings, shrines, and ponds which can be explored and are beautiful themselves.

A stroll around provides opportunities to admire the unique architecture and get an up-close look at the intricate porcelain and glass patterns which cause it to be so spectacular at sunset. 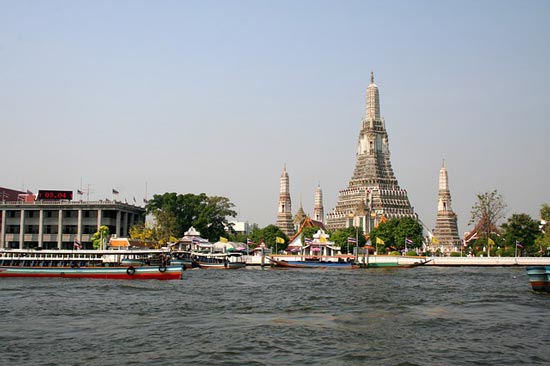 How to Get to Wat Arun

Wat Arun is located on the west (Thonburi) bank of the Chao Phraya River and can be easily accessed from several directions and via boat, train, bus, or taxi.

Many canal tours also take tourists to visit the temple and water taxis can also be used to travel there.

Directions from the East

Many people visit the Grand Palace across the river and then take a boat over to see Wat Arun.

To do so, take a boat from the Tha Tien Pier (No. 8),  which is located at the southwest corner of the Grand Palace.

Boats run back and forth between both attractions quite frequently and tourists should look for boats with an orange flag.

These boats run more frequently, are larger and cheaper than the blue flag boats, and often less crowded too.

Directions from the West

On the West bank of the river, the temple can be accessed by car via Arun Amarin Road.

There are also multiple bus stops one road beyond Arun Amarin on Itsaraphap Rd. It is easy to cross to the East bank over the Phra Pokklao Bridge which is about 1.5 miles from Wat Arun, or to take a taxi to Tha Tien Pier.

Directions from the Airport

From the airport, take the Airport Rail Link to the Phaya Thai stop and transfer to the Sukhumvit Line.

Get off at the Siam stop and transfer to the Silom line toward Bang Wa. Get off at the last stop and walk approximately 15 minutes or take a taxi to Wat Arun. 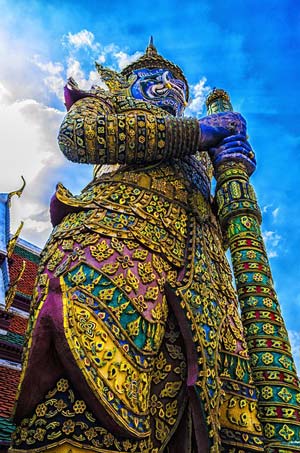 To beat the crowds, go as early as possible and be one of the first people to enter.

Weekdays may also be slightly less crowded than the weekend, although there are always tourists eager to visit the temple.

Although the name of the temple references the dawn, it is also stunning to see at sunset as well. Even if the temple is closed to visitors, it is still a wonderful view from the East bank of the river to see it lit up by the setting sun.

The porcelain in the spires shines in the sun and makes for a spectacular view or photo opportunity.

Many visitors spend at least an hour exploring the interior of the temple or climbing the central spire for sweeping views of the river and Grand Palace.

To enjoy your visit the most, try not to go right before lunch when your visit could be interrupted by hunger. You might choose to eat an early lunch and plan your visit while everyone is out having a mid-day meal.

Admission into the temple is quite affordable and currently costs 30 Baht (approximately $1 USD) for foreigners to enter. Thai citizens can enter free of charge and many enter daily and use the temple as a place of worship.

Because Wat Arun is an active temple and place of worship for many Buddhists in Bangkok, a dress code should be observed .

Visitors are expected to dress with appropriate modesty and respect.

Men should wear long pants and shirts with sleeves (either short or long). Women’s pants or skirts should be at least knee length and tops should not reveal shoulders.

Transparent clothing of any length is also not permitted and tight-fitting garments should also be avoided.

All visitors must remove their shoes prior to entering and leave them in the allocated area outside. Some tourists may be asked to put on a scarf or use a rental cover up such as a sarong if their clothing is deemed to be unsuitable. 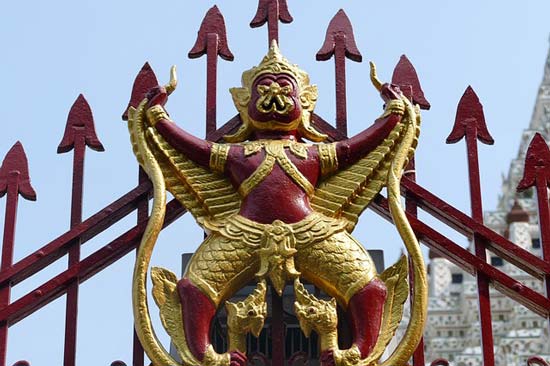 3 Things to See Near Wat Arun

Wat Arun is conveniently located close to several other popular attractions in Bangkok, so make a day of it and try to see more than just Wat Arun. Here's a few tips for you

The Grand Palace, a complex of several buildings (outer court, middle court, and inner court) in a rectangular shape surrounded by walls, is one of the most visited destinations in Thailand. The grounds are composed of several buildings, halls, pavilions, lawns, gardens, and courtyards.

Housed within the Grand Palace is Wat Pho, also known as the Temple of the Reclining Buddha, houses one of the largest collections of Buddha images.

It also features many intricate murals and a courtyard where a Bodhi tree is growing. The reclining Buddha itself is 150 feet long and covered in gilded gold.

Wat Phra Kaew, the Temple of the Emerald Buddha, is also nearby and is considered to be one of the most sacred Buddhist temples. It is known for the dark green statue of the Buddha which stands 26” tall and was carved from a single piece of jade.

There are also many restaurants, coffee shops, and street vendors selling snacks and fruits around these popular tourist destinations.

In summer you can buy sweet mango and fresh coconut water, which is refreshing on a hot day. Although the prices may be inflated a bit due to the influx of tourists, they are still relatively cheap and affordable.

3. The Museum of Siam

The Museum of Siam is also just across the river from Wat Arun and is dedicated to “discovering Thainess.”

This interesting museum delves into what makes Thailand and covers history, culture, food, and influences. It can be a quiet reprieve from the crowded temples or a way to escape the heat and learn a little bit more about this beautiful country.