You are here: Home / Thailand Living / 10 Top Tips to Avoid Being a Victim of Crime in Thailand

Folks are always telling me crime is on the rise in Thailand, that muggings, assaults, etc., are increasing. I've been hearing this for the last 10 years.

Of course, statistics rise and fall, depending on the political and economic climate, but one thing is for sure: the large majority of crime committed against foreigners in Thailand remains petty crime: bag snatches, pickpockets, tuk tuk scams, that sort of thing.

But while it might be petty, it can certainly ruin your holiday.

Much of the crime against tourists reported by foreign news outlets follows one of the following scenarios: a bag snatch on an unsuspecting shopper at a mall, a taxi massively overcharging on a pick-up from the airport, a ladyboy bashing a tourist after an argument on Walking Street in Pattaya, a foreigner refusing to pay overcharging on a bill at a bar and being beaten up by security, a drunk as a skunk foreigner mugged in the early hours as he stumbles back to his condo.

I'm in no way suggesting these crimes are justified in any way, quite the contrary. What I will say, however, is that with a bit of common sense, these holiday-ruining situations can be avoided.

Let me give you a prime example… 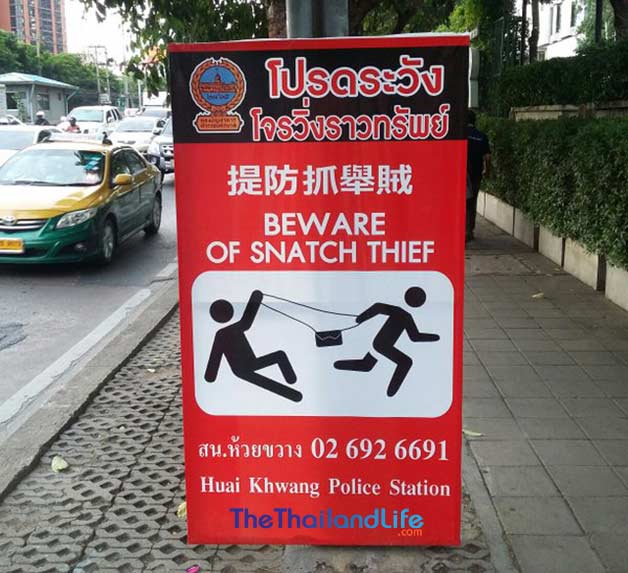 Robbed by a Couple of Pesky Flower Sellers

It was supposed to be a good night out; a catch-up over dinner with a good friend in Bangkok.

Strangely, after about 10 minutes at the table, I felt a funny sensation on my leg. I looked down to see a Jing Jok (small lizard) crawling up my thigh!

That has never happened before; “A bad luck omen”, said my girlfriend when I got home.

Minutes after this incident, we were approached by two boys of about 8-10 years old selling flowers. They hovered for a suspiciously long time, even though we had made it clear we weren't in the market for roses. Looking back, what they did was very clever.

By confusing us for a minute or so, they then employed an eye diversion technique. They began to ignore what we were saying completely and began staring at each other. They drew us into their trap so at one point in this game, myself and my friend, both ended up looking at just one of them for a split second.

Then, in that split second, one of the boys must have whipped my friend's iPhone off the table. They waited until we were quite annoyed and explicitly asked them again to leave.

We didn't notice that the phone was gone until my friend went to check his email about 20 minutes later.

The crafty buggers. The boy who snatched it must have done it so quickly.

We were so relaxed chatting away after they had left that my friend assumed he'd put the phone in his bag.

He was gutted to the say the least, and the staff were pretty shocked too. There was little anyone could do — the boys had scampered.

We did try to take action. We got the bill, walked to the roadside and found a policeman, who offered to take my friend to the station and report it, and to have a look and see if the boys were still around.

He told us that the kids come to the area every night, but by now they'd be in Sukhumvit looking for the next target.

A range of emotions ran through me, as they always do in situations like this. At first I was angry on behalf of my friend; “Where are the little bas**ards, I'll give em' what for”! I even walked the market for an half an hour, eyes peeled and ready to apprehend the thieves.

But what would I have done? They'd have run like crazy, and if I had grabbed one I would have had to drag him half a kilometer to the police station. In that time, no doubt someone would have intervened, and I'd have struggled to explain why I was dragging a screaming kid down the street.

I tried to let it go: “It's just an iPhone. Stuff happens. No one died”.

And why do people steal anyway? People aren't born thieves. They become thieves through circumstance. These no doubt economically-challenged kids saw an opportunity and they took it, and I wouldn't mind betting they have to give the largest portion of the catch to a bigger boss. Even the policeman said there is usually someone higher up the chain manipulating the kids to carry out the crime on their behalf.

My friend was more bothered about the contacts and work-related stuff inside the phone than having to buy a new one. He uses it relentlessly for business, and having just taken on four new staff he really needed to be contactable.

So then you start thinking, damn, if I could just catch the kids and say, “Look, keep the phone, just let me have the sim and the memory card back”.

And that's a case in point: It isn't just about the theft; it's the inconvenience it causes in terms of loss of data and personal and sentimental belongings.

Don't Be Put Off Thailand, Just Be Sensible

Crime like this happens in every major city of the world. I have never been a victim of a crime in Bangkok — although I did leave my phone in a taxi once and never got it back. The taxi driver turned it off when I rang it. So that sort of counts?

I was burgled in Koh Samui. I lived there for around a year and at one point rented a ground floor apartment. The thief broke in through the sliding doors  – which as standard have poor quality locks – and stole my camera off the table.

I believe he, or she, was still in the apartment as I unlocked the front door, because the curtains moved quickly as I came in, which startled me. He or she made off across the land at the back.

Again, this sort of crime is easily avoidable: I advise never renting on the ground floor, and don't leave valuables visible through the windows or back door (glass). I have a feeling the person who broke into my apartment had prowled the building previously and seen my camera and laptop on the table.

That's two incidents in 10 odd years. I was mugged twice in London in two years! No big deal. The phone was my fault really. I should have taken more care of it. The burglary I got lucky. I didn't have many images on the camera and it wasn't very expensive.

It is easy to get caught off guard in Thailand. The holiday vibe: the smiles, the pretty women, the funny guys. Petty crime can creep up on you, taking you by surprise and ultimately ruining your holiday.

My advice is to have fun but remain vigilant.  Tourist areas always attract thieves, all over the world. Don't take risks with your valuables and always keep them out of sight and out of reach.

Don't be put off a holiday by what you read in the news about crime in Thailand. Follow these guidelines to be sensible, stay safe and enjoy your trip.

1. Keep your phone in your pocket

Don't leave your phone on the table of a bar or restaurant. It can easily get snatched, as highlighted in my story above. Make a habit of putting it back in your pocket after every use.

2. Walk with Your Handbag facing away from the roadside

Ladies, never walk with your handbag facing the roadside. Bag snatches on mopeds are commonplace, not just on tourists by Thais too. Best practice is to walk with your bag on the shoulder facing away from the road, clutching it in to your chest with the other hand for optimal security.

3. Keep your valuables out of sight, not in hand

Don't walk around with a purse, wallet or phone in your hand. This seems to a common trend now; perhaps due to the fact people are constantly on their phones. But this makes you a target. Thieves can see exactly what type of phone you have, follow behind you and then snatch it from you the moment you get too relaxed. The same goes for purses and wallets.

4. Switch your backpack around

Wear your rucksack on your font, not your back, when walking through markets and crowded areas, and at all times if possible. Thieves operate in popular malls like MBK in Bangkok, and will sneak up from behind and undo your bag.

Don't walk around with more cash than you will need. Take out the amount you think you will need and leave the rest in the hotel safe, or the ATM. You can always withdraw more, or pay by card if need be.

Mosts pockets on shorts are not designed to carry valuables safely. We've all lost something out of poorly designed pockets before, so when in Thailand wear shorts/trousers with zip pockets. You are an easy target for a pickpocket when wearing baggy pockets that don't zip up and reveal exactly what's inside to the person walking behind you. Better still, get a bag that straps tightly to the front of your body and avoid pockets altogether.

7. Never let others take your bags

Don't let staff take/hold your bag when getting on a boat, train or bus. I'll never forget the honeymoon couple I met in Samui who'd just arrived on a boat and handed their bag to the deck-hand to stow for the journey. All their holiday money was stolen. I met them sitting outside a shop, in tears. Keep your belongings with you.

If you plan on drinking a fair bit, make sure you go out as part of a group. Plan for one of you to take it easy that night so that he/she can make sure the others get home safely. Whatever you do, don't go out drinking alone and get so out of your head that you don't know where you are. You will make yourself a target for petty thieves.

9. Be careful of the “bill scam” in bars

When drinking in a bar, particularly a “lady bar”, pay for your drinks one-by-one, as you order them. Do not let the bill rack up and be kept behind the bar or in a pot on your table. Numerous tourists are scammed each year by extra drinks being added to the bill.

Confusion is also caused when you agree to let one of the workers have a ‘lady drink'. Before you know it, she and her three friends may have added 50% on top of your bill. Shocked by the total of your bill, it is likely that you will feel compelled to refuse to pay. It is then likely that you will find yourself in a dangerous situation, and possibly end up being the victim of an assault.

Whether it be a taxi or tuk tuk driver or market stall owner, if a Thai person is rude to you or being unfair, simply walk away. Do not get into an argument or fling insults at the person. I admit, this is hard not to do when you are angry, but fights seldom happen one-on-one in Thailand and you may quickly find yourself surrounded by more than one opponent and out of your depth.