You are here: Home / Culture / Thai Cuisine / Where Is The Best Thai Restaurant In London?

Since I am visiting London with my GF this time, there has been more of an incentive to find good Thai cuisine in the capital –she is definitely experiencing withdrawal symptoms!

I thought it would be a good idea to start this post and build a list, one which people could add to and share their finds. I know a lot of guys visit London with their Thai girlfriends (and women with their Thai boyfriends), and finding Thai eateries that please the Thai palette isn't an easy task so far away from the motherland. 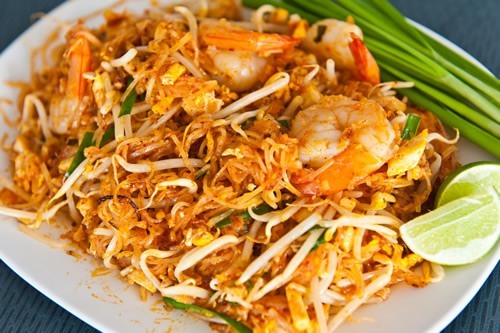 Thus far I have been to three Thai restaurants on this trip. Here is a short overview of each:

This is a gem of a place, a real cosy living room type venue with an open kitchen and almost typical budget Bangkok vibe. The prices, however aren't budget, but then to be fair all three restaurants so far were priced about the same – think around £7.95 for a Prawn Pai Thai.

We turned up a few minutes before opening time (6pm) and could see the staff eating inside. They wouldn't let us in though until the clock struck time. So we did jumping on the spot to keep warm until they unlocked the door.

The Som Tum wasn't impressive, very salty and tasted like it might have been frozen beforehand – it isn't easy to find good papaya here so I didn't expect much.  The Penang Curry, however, was awesome, as was the Tom Yung Kung Soup and Chicken Pad Thai. They also do a great starter platter for two which is worth checking out. There is no liquor licence but you can bring a bottle.

Royal Thai has a great vibe to it.  The owner is from Udon Thani and so are most of the staff, all of whom are friendly and willing to chat about Thailand. Book in advance as seating is limited.

If you like your Thai food a little sweeter then this place is for you. Pricing is fair, we went with friends and ate a feast for £97; I know that is 10x what you will pay in Thailand, but it isn't half bad for London, well the suburbs of London anyway. I had the Lad Na and Thai Green Curry, both of which were pleasing, but the best part was my Tom Kha Hed Soup and the huge King Prawns, although not a patch on the ones I experienced dining on Chaweng beach some years back.

The dishes were tasty and spicier than The Royal Thai, yet altered in appearance somewhat, which my girlfriend had trouble getting to grips with and had to ask the waitress a couple of times if the order was correct.

The staff were friendly and I engaged in conversation in both Thai and English with the waitresses, both of whom are attending language schools and couldn't wait to get back to Bangkok! No surprise there then 🙂

This cosy restaurant situated just off the famous Carnaby street (starting to sound like a restaurant columnist now) was by all accounts the “most Thai” of the three. We attended with a English girl I met in Koh Samui a long while back and her Thai husband who is a chef – his recommendation was good enough for me.

This place was full of Thais, which of course is a good sign, and there was even a special menu sheet in Thai for Thais who want home-style food. We had (apologies for the spellings) Pla Chon Louis Sawan, Kai Jeow (basic I know but miss these not being in Thailand), Som Tum (better than the Royal Thai), Pad Pak Bung Fai Daeng, Gang Som Pla Chon, Pad Thai and more…we also had green pancakes for dessert and Jasmin tea.

The bill came to £87,  yet we ate less than we did at Thai & Co in Finchley, but I did expect the price to be higher in Central London.

Again the staff were friendly, the vibe was cosy, the food very good and well worth the visit.

I will add more restaurants to this list as I go. Feel free to pitch in.