The National Broadcasting and Telecommunications Commission's (NBTC) plans to boost national security by approving in principle a plan to issue special sim cards to foreign tourists so they can be tracked via their mobile phones.

As well as visa overstayers, the NBTC said it could also be used to find those on the run from police.

“It will be helpful, if any foreigner comes and commit crimes, because in the past they have been able to flee or it can be difficult to find them,” said Pongsathorn Chansri, an official in the Ministry of Social Development and Human Security.

Unsurprisingly I've received a fair few questions on this and, while it hasn't come into force yet, I've put together a Q&A guide for tourists worried about what this means for their trip. 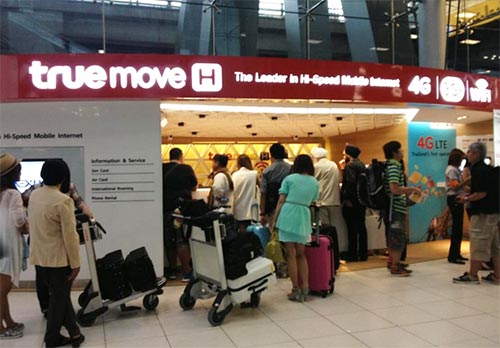 Surely a scheme like this would mean horrid queues after a long-haul flight.

1. Why is Thailand considering tracking tourists with a special sim card?

The commission’s secretary general, Thakorn Tanthasit, has said that the plan would not only help catch terrorists and criminals but also help find travelers who were in trouble or had gone missing.

2. What about those on work permits or long-stay visas?

The proposal is aimed at tourists only. It was initially said it would cover everyone, but a rethink means it will now exclude those working in Thailand and those on long stay visas.

3. When does this scheme come into effect?

The proposed launch is January 2017; though opposition to the scheme is likely to push the deadline back. There's a possibility it might be scrapped due to impracticalities relating to enforcement, but for now consider it going ahead,

4. Don't the authorities already have the capability to track mobile phones?

Yes. As in most countries of the world, if the Thai authorities want to track the phone of a specific person, or gain access to phone records, they can.

Put it this way, if you use international roaming in Thailand, you can be traced from the time you touch down, right through your journey.

But! They need a court order to track a phone. No court order, no tracking. The same rule will apply to this sim scheme. So in short, they will only track you if they need to.

5. Why are they doing this all of a sudden?

Actually, this is more of a progression than something new. If you live in Thailand, you'll know that last year everyone with an unregistered SIM card had to get it registered before a certain date, otherwise it would expire. This initiative sought to match numbers to residents and therefore improve security intelligence.

The problem is that people can get around the registering of a SIM card with fake details and documents. The new scheme will enable authorities to track every single tourist at source, right up until they leave.

Generally, it is considered that those on a long stay visa are more trackable than tourists; because they should be living at a permanent, registered address, registered at a workplace / doing 90-day reporting of some kind. Of course we know that in reality this isn't always the case.

Tourist sim cards are readily available on arrival, but not compulsory. Will this be the case in 2017?

6. Will I be required to buy this new SIM card when I arrive in Thailand, and what network will it be on

The SIM card will presumably be issued on arrival. No fee has been announced yet.

I'd imagine you'll be able to choose the network — True and DTAC already have stands at both airports, and all major operators already offer “tourist packages”. I can't see how they would give just one operator the contract on the new sim cards; that would be anti-competitive and cause uproar in the business community.

AIS, the country’s leading mobile phone service provider, said it would be “happy to comply” with the plan if it helped to ensure national stability. It noted the existing requirement for everyone, Thai and foreigner alike, to register when buying a sim card.

7. But couldn't I just throw away my sim and use international roaming instead?

Yes, but as mentioned previously, they can just as easily track you on international roaming anyway. This may also be a violation of the terms.

Although, Poomjit Sirawongprasert, the president of Thai Hosting Service Providers Club and a strong advocate of free speech online, described the plan as useless, especially if it was meant to help capture criminals or terrorists. “The use of roaming sims from other countries, or having a Thai citizen buy a card for a foreigner, could easily evade monitoring,” she said.

8. Can't I just put the sim card in my phone and then turn off data roaming?

It wouldn't be effective. The NBTC said the special Sim cards would come with tracking enabled, which the user could not turn off.

9. But doesn't it violate my human rights to be forced to use a sim card I don't want to use?

Quite possibly, yes, and that's why the scheme may not go ahead. Pressure from overseas governments and rights organisations may say this is a step too far.

The authorities will know where you are at all times. I mean, it's not like someone is going to be tracking you on a radar, but if you're a “person of interest” then you will be subject to “listening in”.

The thing though is this: Like in any other country, Thailand has the capability to track you down if they want. People like to say Thailand is a big snooper, but in reality Thailand is way behind the US and the UK and, in fact, it is the US that has put pressure on Thailand to be more efficient in spying.

But let me be clear here: This isn't actually about spying, but rather the ability to track somebody quicker if they need to. Let's say a known criminal enters Thailand as a tourist. A foreign authority calls Thailand to let them know he is on the loose. If he has the sim, he can be picked up immediately.

11. What? It wouldn't take much for a hardened criminal to circumvent this!

Not my idea! Go figure.

12. Is there any way around this, if it doesn't come into effect?

Some will say the old line; “If you have nothing to hide then what are you afraid of.” I don't buy that. It's important we don't let our freedom become strategically eroded over time and manipulated into a new definition.

We should endeavor to fully understand what the implications are and whether a security measure is really going to be that effective before we roll over and succumb.

Potentially, you could become untraceable using a VPN — installed on your mobile. This would make it appear as if you were in another location. You can read my post on this here. But in my humble opinion, I don't think this scheme is going to happen, or at least not in the currently proposed format.