The prudes are brimming in absolute disgust this week at a song that has taken the country by storm.

“Kann hu”, which means “scratch ear”, by Ja Turbo (don’t quote me on that name, intros with orgasmic sounds followed by the line, “kann hu mai rue ben arai”, which translates as “scratching my ear, I don’t know what it is.”

However, when you see the video, what Miss Turbo is actually referring to is the fact that she feels compelled to touch herself in a naughty place, and makes no bones about hiding the fact by using suggestive hand signals.

Last night, a one-sided debate ensued on television to vent disgust at the song and its insinuation of sexual activity. There are even videos on Youtube with various people citing the potential effects of corrupting young people’s minds, and of course how such imagery negatively impacts Thailand and Thai culture.

Now, before I move forward with some points and end up being blasted for not knowing the “real essence” of Thai culture, I want to say that I fully appreciate that most Thais are sexually very modest, and indeed sex isn’t something to be discussed openly or bound around willy nilly (had to get that pun in).

I know this first hand through my best Thai friend, who spent three years schooling me on “real Thai women” and not those you see drunk, cigarette in hand hanging upside down on a pole in a seedy Bangkok strip joint. Point taken “nong”, thank you. But come on, if Thailand wants to protect its image and make the rest of the world understand Thai culture, then why not be outraged at its open sex industry instead of a very harmless and entertaining song.

Moreover, lots of young Thais, and indeed older Thais, listen to Britney Spears, Lady Gaga and a broad range of Hip Hop artists who all spout sexually suggestive lyrics and wear revealing clothing. You can’t let your kids grow up on this music and then not expect them to mimic their idols, albeit innocently.

So this got me thinking. Is it fine when foreigners do this stuff, but not when Thais do it? Is it expected of foreigners but not of sexually reserved Thais. Do Thais think they are generally viewed as a sexually reserved culture? I mean that genuinely, not sarcastically.

Where are these same protectors of sexual Thai modesty (the TV show damning committee) when women are shooting ping pong balls out of their vaginas in Patpong, or when women are dancing naked in the clubs of Soi Cowboy, or when girls probably younger than we realize are prostituting themselves on Soi Nana and adjacent street corners? This industry alone has given the world the idea that Thailand is a sexually liberated country that doesn’t see a problem with some good old-fashioned sexual activity. 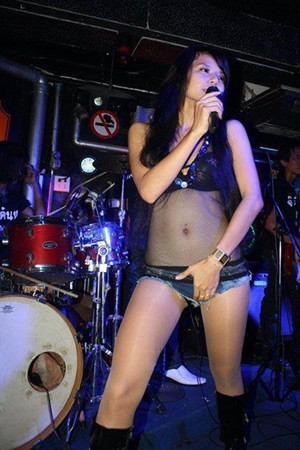 Ja in action at a live concert

Of course, there is nothing wrong with sexual expression, although I object to the institutionalised objectification of women, but that's for another post.

It just baffled me that there are so many objections to this song. It made me laugh a little actually, because paradoxically a large proportion of foreigners come here because Thailand feels a whole lot more sexually liberated than the West. For example, a place where a man being 10 years older than a woman isn’t a problem; a place where men and women can be openly gay and having a transsexual person serve you in Tesco's is nothing out of the ordinary.

I find the uproar over this song all rather hypocritical and silly to be honest. I am perfectly aware that “real” Thai culture has its roots in modesty, but then it was only 50 or so years ago that women in rural areas were still walking around with their boobs out. And that’s just the point. We need to use time as an indicator of context here. You can’t bring up entire generations of women with the ideology that women should be pretty little fragile things with a perfect balance of elegance and sexiness, and then jump with outrage when a woman releases a song with a daring sexual reference.

To me this only serves to show how sexist attitudes are. Women are sexually objectified by men, but aren’t allowed to take hold of their sexuality and empower themselves in a way of their choice.

It’s the old story, when a man sleeps with a prostitute he’s a man with needs, but the woman will forever remain a whore. Okay, so prostitution isn't female empowerment, but if a woman were to argue she is exploiting the man for his money, she would still remain a disgrace in the eyes of men, and the majority of women.

Similarly, when a man has a one-night stand and tells his friends of his conquest he becomes a her, yet the participating female is considered disgusting and not “girlfriend material”. She couldn’t possibly have made a conscious decision to want sexual pleasure for the evening, could she? Of course not, she’s a woman.