You are here: Home / Wildlife / 10 Reasons You Should Never Ride Elephants In Thailand & What to Do Instead

If there’s one symbol that’s synonymous with the Kingdom of Smiles, it’s the elephant.

Emblazoned on t-shirts, acting as the mascot of the kingdom’s (arguably) best beer, and tattooed on the ankles of visiting wanderers, the friendly elephant is the perfect representative of the nation known for its stunning wilderness, unique animals and welcoming atmosphere.

The elephant has also played an important role in Thailand’s history, beginning hundreds of years ago with the Buddhist and Hindu communities who believed that elephants played a significant spiritual role in culture and community.

Over the ages, elephants were also used in agriculture and in battle.

Over the decades of the 21st centurny, they’ve become an alluring tourist attraction.

While this may seem like an incredible experience and an opportunity to get close to these majestic creatures, elephant riding is deeply problematic.  you may be surprised to know that the industry is inherently cruel and continually puts the health and lives of elephants at risk.

In this post, I take a look at the 10 key reasons why you should not ride elephants and partake in the tourist industry in this way.

I have included two videos, the first of which contains quite disturbing, but must be seen, footage.

The second is a documentary that also contains footage that you may find disturbing, but at the same time is a very insightful watch.

At the end of the post I offer some tips on what you can do to help and how you can book an ethical elephant experience.

10 Reasons You Should Never Ride Elephants In Thailand

1. The “Breaking in” Process

The process of “breaking” the elephant is traditionally referred to as phajaan, or “the crush”.

All captive elephants will have been subjected to this brutal process, though few elephant trainers will ever admit to its horrors.

The fact is, a wild elephant would never let a human near it, let alone ride it.

So, to break the elephant’s spirit and force it to submit to human will, trainers will often chain the animals or force them into tiny pens where they can barely move.

The process often involves beating, withholding food and water, and the use of bullhooks (pointed spikes used to direct and steer wayward elephants).

This traumatic process may last for a duration of weeks or even months.

2. The Elephants Are Often Overworked

Programs that encourage elephant riding are often exploitative to the extent that exhaustion and fatigue-induced death is not only common but imminent.

Over the years, there have been a number of elephants that have died from overwork and exhaustion throughout Thailand and Southeast Asia (the Kingdom still has nearly 3,000 working elephants).

While it’s not difficult to see that these animals are suffering from overwork in the hot sun, their owners and trainers often overlook the signs in order to make as much money as possible; squeezing a few days of labor into one. 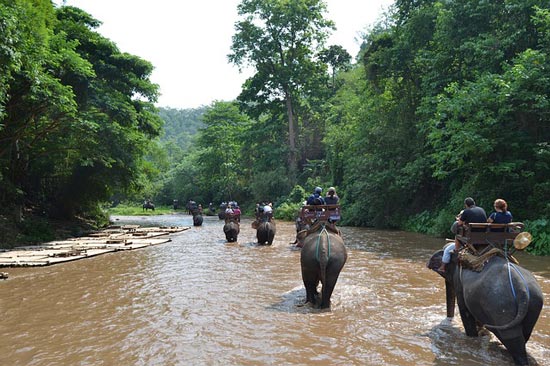 These elephants carry heavy loads, for most of the day, every day.

Elephants in exploitative situations are often improperly cared for and are unlikely to receive the proper nutrition and water.

An adult elephant generally eats between 200 and 600 pounds of food per day, drinking as much as 50 gallons of water.

As you can imagine, providing adequate food and water for these creatures is quite the financial strain.

As a result, many elephants are purposefully undernourished so that their owners can take a larger cut of the profit and also so that the animals are more tractable and docile in their weakened state.

Elephants ridden for tourist enjoyment are almost always captured from the wild.

As they’re highly intelligent and community-oriented animals, this process is often terrifying and detrimental to their welfare and mental state.

The “pit trap” practice, which often culminates in fatalities, is particularly troubling. During the process, domesticated elephants are used to corral a wild herd into a corridor with a deep pit that traps the animals as they fall in.

Protective and aggressive members of the herd are killed to make the process less tumultuous, and injury and mortality rates are inevitable during the undertaking. Because the market value for baby elephants is over $30,000, this practice still exists in parts of Thailand and Southeast Asia.

Elephants have a substantial lifespan —  anywhere from 40 and 60 years, depending on gender (the females tend to live longer) and lifestyle.

However, this lifespan can be cut drastically short by poor treatment in captivity, such as overwork and undernutrition.

Many elephants have died giving their life to tourism enterprises, so it’s best to consider whether or not your participation in elephant riding centers is worth the increased risk to the animals.

As previously stated, most elephants in captivity have been snatched from the wild, beaten and broken, and enslaved by exploitative groups.

Tourists and even mahouts have no idea how this kind of treatment affects the psychology of these intelligent animals. It can cause mental illness in elephants, depression and anxiety. Such conditions can manifest in angry outbursts that could be extremely dangerous for those in close contact. 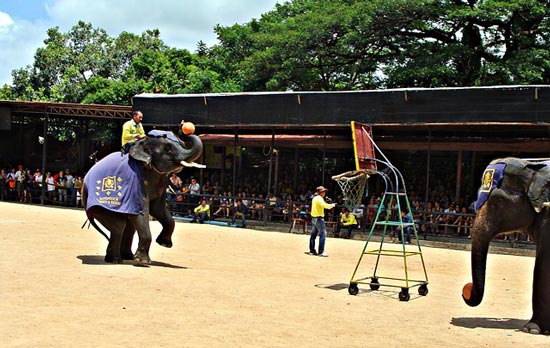 Elephants were not born to be exploited by humans in this way. These shows, made possible through force, can turn elephants mad and make them a risk to themselves and spectators.

Supporting elephant riding encourages a host of other dubious (and cruel) practices, such as street begging.

In some cities, mahouts (elephant trainers) will lead their animals through the streets, instructing them to perform tricks for money or selling overpriced fruit for tourists to purchase to feed to the elephant.

This is yet another example of elephant cruelty: the sights, sounds, and crowds of urban environments can be extremely overwhelming to these sensitive animals.

The streets can also be dangerous to elephants, as the hot road can burn their feet, while garbage and broken bottles can cause injury. This leads to an increased risk of blood poisoning, infection and even fatalities.

8. Riding Elephants Can Be Dangerous –  for Them & You

Although elephants are known for their gentle dispositions, riding them is undoubtedly dangerous.

Elephants, like any other wild animal, can be unpredictable, particularly when they’re stressed or in heat.

Because of this risk, it’s unwise to allow children to ride elephants and unkind to ride them as adults.

In 2016, a British tourist was killed after being thrown from, trampled and gored by an elephant during a trek on the Thai island of Koh Samui.

The elephant was given two weeks off before returning to work, which is unsurprising, considering an elephant that killed a British tourist in 2000 is still actively working today.

Riding elephants can also pose a health risk to those in close contact — in fact, there have been known cases of elephants with tuberculosis spreading the disease to their handlers. 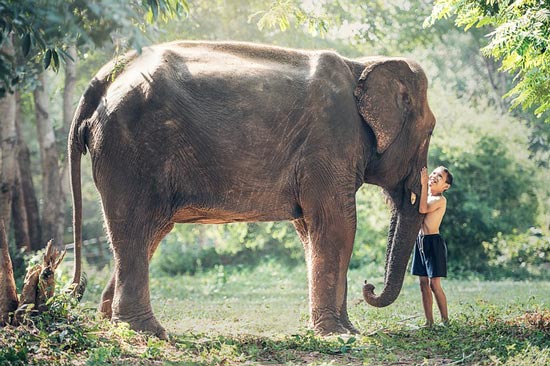 Elephants don't want to hurt people, so don't force them to.

What happens when an elephant can't Partake in tourist rides any more?

What happens when an elephant becomes unpredictable and is turning on tourists and it's mahout?

What happens when veterinary bills, expensive outweigh the income made from the tourist industry?

What happens is that the elephant becomes a business expense that is no longer recoup. Elephants are neglected, and often left to rot  on wasteland or inadequate fields, where access to the broad variety of plant matter that they require to obtain  optimal nutrition is not available.

In the early-1900s there were an estimated 100,000 domesticated or captive elephants in Thailand.

In mid-2007 there were an estimated 3,456 domesticated elephants left in Thailand and roughly a thousand wild elephants. (Wikipedia)

Many elephants used in Thai tourist attractions (60% in 2014) originate in neighboring Myanmar, where poaching and illegal capture poses a serious threat to the country’s dwindling wild population.

What You Can Do to Help

The presence of working elephants in Thailand is still prevalent and it doesn’t seem like the practice of riding is going out of business anytime soon, though it has received plenty of heat from animal rights activists, lawmakers, and tourists alike.

The presence (and profit) of elephant riding camps encourage the presence of other exploitative animal industries in the Kingdom (and in SEA). Consider, for instance, Tiger Temple, which is well-known for illegally stealing tiger cubs from the wild, restraining them, and drugging them so that eager tourists can get up close and personal with these big cats.

When tourists spend money on unethical animal encounters, it encourages participation in these markets, leading to even more animal cruelty.

The best thing you can do as a tourist is to vote with your dollar. Always choose interactions and experiences that honor the environment, the animals, and the local community.

Let’s be honest: most people participate in exploitative animal industries for the photos.

However, that’s a pretty poor reason to engage in an industry that is known to be unethical and even dangerous.

Engaging in elephant riding and then posting photos about it helps to normalize an extremely problematic behavior and activity that most people don’t know the truth about.

Watch the interesting documentary below by clicking ‘play' on the player.

How to See Elephants in Thailand

Fortunately, some organizations are working to combat this industry.

Recently, TripAdvisor announced that it will stop selling tickets to attractions that allow tourists to ride elephants. This decision accompanies a ban on the sale of encounters with dolphins and tigers through the popular booking site.

If you’re determined to encounter an elephant on your next Thai trip, know that you don’t need to ride one to have a meaningful interaction.

There are plenty of ethical elephant sanctuaries that care for the animals in the right environment with the proper nutrition.

You can get up close and personal with the elephants but on their terms and not yours.

You can feed the elephants, wash them, and interact with them in a neutral environment.

Your money will also contribute towards their care, rather than their exploitation. 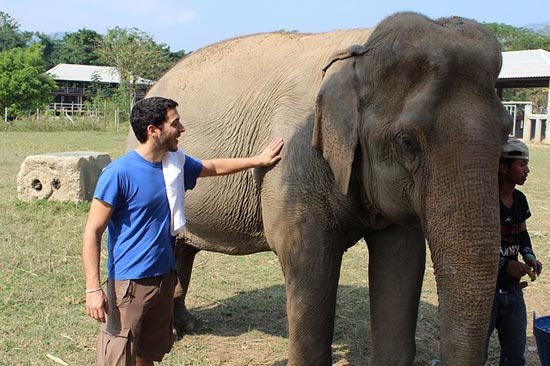 One of the most popular elephant sanctuaries in Thailand remains Elephant Nature Park in Chiang Mai.

They are world-renowned for their educational materials and ethical processes, their clean and safe facilities, and their qualified keepers.

The organization is dedicated to the care and rehabilitation of these gentle creatures.

Because of the popularity of this center, you’ll need to book far in advance. Read more about that park in this post here.

Though navigating ethical elephant interactions in Thailand can be difficult, armed with the information in this post, you can do the right thing and support a sustainable, cruelty-free future for elephants in Thailand.