You are here: Home / Travel / Driving in Thailand: 7 Essential Tips to Stay Safe on the Road

If you're planning on driving during your holiday to Thailand then you might be a little apprehensive about driving in another country and what that might entail.

If you're from a country where driving laws are well enforced, then you may be a little surprised at how often motorists ignore the road rules in Thailand.

I don't drive daily in Thailand but I've had my fair share of experience and tend to drive when we go on holiday, in country.

Of course, every country has its fair share of bad drivers and it's not like I don't find myself swearing under my breath back home.

The problem in Thailand is that for many years the test to obtain your driving licence in Thailand was so easy that it meant many inexperienced drivers simply took to the roads without ever really understanding the laws.

The actual test itself didn't involve any real driving on the roads, but rather simulated roads on derelict land: think driving in and out of cones.

The test standards have got better in recent years, but there are drivers on the roads who have never passed the test, anyway.

If you drive sensibly and cautiously you will be fine.

Just use your mirrors lots and always keep a good distance between yourself and the car in front; that way you will be able to anticipate any silly maneuvers such as turning off without signaling 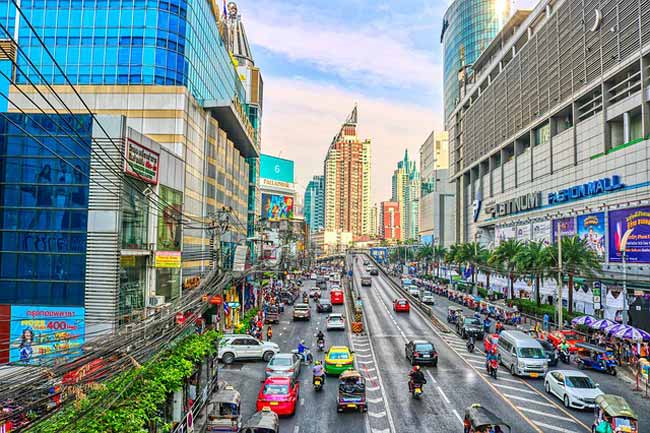 Pulling out of side turnings onto main roads can be difficult. Be bold!

7 Tips for Driving on Holiday in Thailand

1. Driving on the Left

If you're from the United Kingdom, New Zealand, South Africa, or Singapore, then you'll be accustomed to driving on the left-hand-side.

If you're from the USA, Germany, Switzerland, or China, then this will be quite a challenge for you.

You really need to remember this rule, especially if you're arriving jet-lagged and tired from your journey. You will need to get used to turning left at stoplights and giving way to oncoming traffic when making a wide right turn.

I remember when I went to America and drove state to state, it was a real nightmare for me on the freeway trying to get used to turning on and off.

Hardly etiquette, but do take note…

Not all intersections have stop signs, particularly smaller ones.

However, even if there is a stop sign, many drivers will try their utmost to make a dash across if they see nothing coming. They may do this even if they see something coming but don't think it is near enough to hit them.

Beware of motorcyclists suddenly pulling out at intersections, even if they don't have right of way. This is a common occurrence in Bangkok.

If you're sitting at an intersection, you will see motorcyclists creeping up and rolling through the stop sign, and performing illegal U-turns. The only time they tend not to do this is when they see a policeman in a police box at the junction.

In the UK we have zebra crossings. When a pedestrian is present at the edge of the crossing the motorist has to stop and let the pedestrian crossed the road. Thailand has tried to implement the zebra crossing concept but not many drivers take notice.

There are pedestrian crossings at intersections, so when the lights are red the pedestrians are signaled to walk across.

But where there are pedestrian crossings that aren't on an intersection, drivers generally don't stop, even when pedestrians are waiting to cross.

The problem is, if you slow down and stop suddenly to let a pedestrian cross, the car behind you will not be anticipating this because they never stop and it isn't general practice. So you may end up getting rear ended.

My advice is to do exactly as the Thais do:

It sounds like madness, but if you follow these rules you are less likely to find yourself the sole car stopped in the middle of the road and causing an obstruction.

Don't panic if you are pulled up and find yourself suddenly being surrounded by motorcycles, many of which will pull right in front of your car – literally touching it.

When the light goes green, just wait for the motorcyclists to pull off – they will do so very quickly – and then you can pull away. 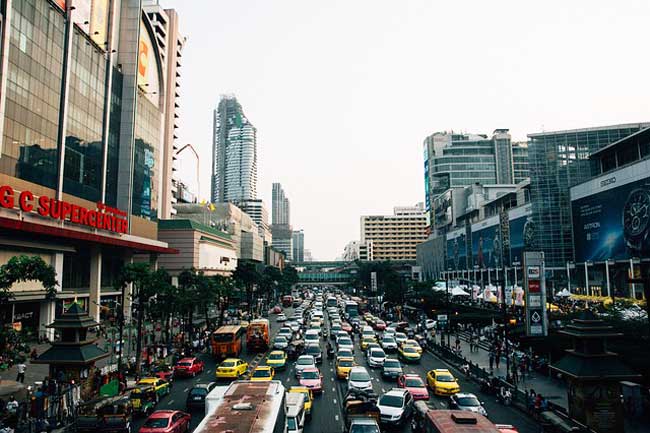 Oftentimes you won't have to worry about driving in Bangkok, because the traffic doesn't move!

If you have been taught to drive properly, no doubt you check your rear view mirror and your wing mirror and take a look over your shoulder before you switch lanes.

Thais generally aren't so diligent when it comes to switching lanes.

You will undoubtedly encounter the drifter who seemingly didn't look in the mirror at all. And many drivers seem to only glance quickly before moving over. So make sure you pay attention to the car in front of you, be that directly in front of you or in the left or right lanes.

The rule seems to be that if you can fit in the space you can park there, so don't be surprised if you see some horrendous parking.

That said, look out for signs that say “No Parking on Even/Odd Days” or “No Parking from 7-9am.”

Curbs that have red and white stripes are also off limit.

There are also specific parking areas designated for taxis, motorbike taxis and tuk tuks, so if you're in one of the cities or on one of the islands you need to be aware that.

Don't be surprised if you see cars parked in driving lanes down some streets.

Wider streets with three lanes quickly become two as people turn them into parking lanes. This is particularly common in Bangkok, where it is very densely populated. 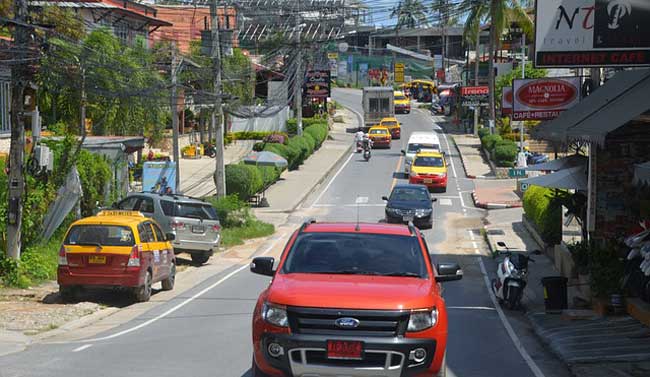 Islands have less traffic but the roads a tad more wild west!

In the United Kingdom, we use a flash of the headlights to notify another driver that we are letting them through first.

If we are the driver being let through, we will give a flash of the headlights as we go past the to say thank you.

If someone is flashing their headlights at you in Thailand it is usually a signal that you need to get out of the way. This is also the case on a motorway in the UK, when someone wants you to move over.

To hire a car in Thailand you need to have an international driving licence, and one that permits you to drive other cars. If you want to hire a motorbike, then your licence must permit you to drive a motorcycle.

Keep your driving licence on you all times. Checkpoints are fairly common in Thailand and you may be pulled over and asked to produce your documents. This may include the hire car contract; so keep that on you too.

I'm sure you'll be just fine, but do make sure you have good travel insurance.