You are here: Home / Bangkok Living / A Review Of The ’42 Tee Off’ Driving Range In Bangkok

I dabbled in a bit of golf back home and recently thought I'd get back to swing practice in the city of angels.

So off I went with a friend to 42 Tee Off , which is half way between Ekamai and Prakanong BTS stations; you can get off at either one.

The range is located right next to Sukhumvit 42/1 and Srivikorn School; you can't miss it.

It's pretty impressive, and even though a tad more expensive than others in town because of its central location, still cheap as chips. 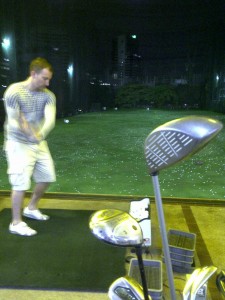 I Snapped My Friend As I Took A Break

The staff weren't great, if I'm honest. My friend and I were given the wrong food order which they were reluctant to correct.

The ball replacement was also pretty slow, and then the guy bringing the ball trays asked me twice for a tip on our way out, which is something I've never experienced in Bangkok – although perhaps this is some form of golf etiquette I am unaware of. I did tip the food guy.

That said, we aren't regulars, so perhaps staff priority is to take care of members who buy lots of food and drink and tip big.

And to be fair it was late in the day, so perhaps the staff were tired. They probably get paid peanuts too.

The vibe is chilled and makes for a good stress release. The clientelle were mainly Chinese and Japanese businessmen and their partners hitting some balls after a hard day at the office.

There were a couple of families there for a fun night out, but judging by the fact that most people had their own clubs, and were pretty good at driving, the large majority were regular golfers.

All said and done, it was a fun night and the range is great. A sure way to let off some steam and escape the hustle and bustle of the city for a while.

We went on a Friday night at 8.30pm. It was busy but there were a few spots left. The place was almost empty by 9.30pm and it stays open until 11pm.