You are here: Home / Travel / Thailand Airport Taxi Guide: Pricing for Fares to Your Hotel

One of your first considerations when arriving in Thailand will be; “how do I get from the airport to my hotel”?

It sounds simple enough, but depending on where you arrive, the options and pricing will differ.

In this article, I cover a few of the most popular holiday destinations, so that you'll know what your options are for airport transfers. 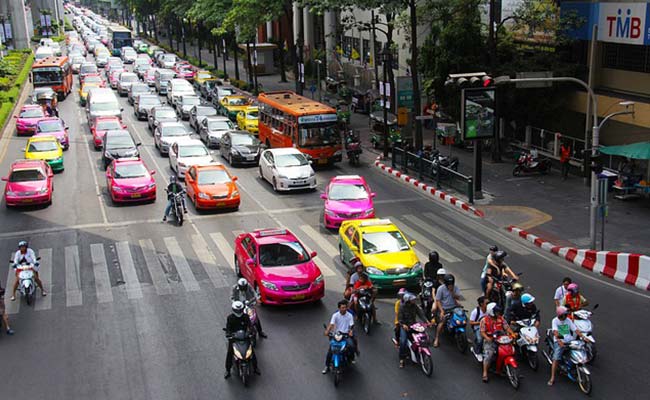 Thailand's taxis come in pink, yellow and green, and orange. The color of a taxi indicates which co-op it belongs to.

If you're fortunate enough, your hotel will offer an airport transfer service – free of charge. And even if it's not free, it should work out cheaper than a private hire car. Free transfers are common with high end hotels within reasonable proximity of the airport.

Many hotels do offer them – often partnering with local drivers rather than employing their own – but usually charge.

Hotels usually charge between 400-1,000 Baht per transfer, and some will offer a return journey deal.

It's definitely worth paying for (in my opinion), especially on arrival. After a long flight, there's nothing better than seeing your name on that placard in the arrivals hall and hopping straight into a luxury sedan with air conditioning (Thailand is super hot).

It makes the journey that much smoother. There's also the added peace of mind that if you do leave something in the cab by accident, you're likely to get it back, which may not be the case with a public taxi.

You can also assume the car will be clean and smell nice – this can be hit and miss at times with public taxis, although some are very well kept.

If your hotel doesn't have a transfer service, or you're on a budget and want to save your pennies for coconut ice cream instead, getting a public taxi to your hotel is the best option in Bangkok.

The official taxi rank at Bangkok's Suvarnabhumi Airport is held on level 1.

Ignore any touts trying to lure you into a private car deal as you pass through the arrivals hall, unless you want a private car, in which case I suggest going to one of the official desks to arrange this.

Public taxis are metered cars. Taxi drivers in Bangkok are legally required to turn on the meter and charge per kilometer, as opposed to asking for a fixed price, which we'll discuss a little later on.

Interestingly, taxis operating out of the airport are supposed to be less than 5 years old, the car, not the driver. I don't believe this is strictly obeyed, though, since I've had a few that I'm sure were older than that.

Getting a taxi from the airport comes with a a 50 Baht surcharge, which is added onto your final bill. You may also have to pay a toll fee on the expressway, which is usually 80 Baht for the tolls passed going back into town

The taxi meter starts at 35 Baht and is priced at 5 Baht per kilometer.

The cost of a taxi to your hotel will depend on the time of day and the traffic you encounter, and of course how far your hotel is. All in, expect to pay somewhere between 200-400 Baht.  Plus a little tip, if you'd be so kind.

Taxi ranks at Don Mueang are located outside both Terminal 1 and Terminal 2 of the Arrivals Hall.

Taxi from Suvarnabhumi to Pattaya

In case you're wondering how much a taxi is from Suvarnabhumi (Bangkok) Airport to Pattaya, the journey will set you back around 1,100 Baht, not including toll fees and the surcharge.

That's on the meter, though. You may find a better price negotiating with a tout, but I don't recommend it because the car might not be licensed.

Most taxi drivers will try it on for a fixed fee to Pattaya rather than use the meter. They usually ask for 2,000 Baht.

It takes approximately and hour and a half to get there, but it really depends on the time of day.

Phuket public airport taxis are more expensive than their Bangkok counterparts. They operate on a fixed price basis rather than a metered approach. The airport surcharge is also double (100 Baht).

The issue some people have with fixed rate taxis is that the prices generally don't reflect the local economy. If one was to turn on a taxi meter for the same journey, the fare could be as little as a third of the price.

That said, some holiday makers – those used to a high cost of living – probably don't take much notice and think they're getting a fair deal. Indeed, it's mostly us expats who grumble.

One might ask: why don't they use meters in Phuket? Good question….

Well, the islands, like Samui and Phuket, are, let's say, a law unto themselves. They are self-governing in many ways, similar to the way America has state laws. Things just work differently there because there is strong local governance and “influence” (we won't get into that here).

In addition to the surcharge, here are some prices for rides to popular locations on the island:

If you're in a group, you might be better off taking a minivan to your hotel. A ticket will cost ฿150 per person. The one downside to a minivan is the number of stops it makes on the way, as it has to drop each person at their hotel.

If you want a cheaper, more local mode of transport, try the airport bus service, which stops at a number of locations on its way to Phuket Town. You can buy a ticket online for ฿120.

Krabi airport serves Ao Nang town and the popular beaches Phi Phi and Reilay. The good news is that many hotels include, or offer, a taxi and boat transfer, and travel packages generally do too.

If you don't have transport included, there are taxis available with similar pricing to Phuket.

There's a good bus connection into Ao Nang, but the buses don't run very early in the morning or late at night.

If you thought Phuket airport taxis were expensive, wait until you see the Samui prices! Samui has no public taxis available; those at the airport are all considered private.

I definitely recommend you look into a hotel transfer if you visit Koh Samui, as the taxis are a rip off. I mean, it's only like £25, which when on holiday isn't a great deal, I guess, but when you drive 5 minutes down the road and he says “we're here” you'll realize the pricing is anything but fair.

Minivan pricing is a lot more affordable at 120-200 Baht per person.

Chiang Mai is another popular tourist destination, with travelers usually flying up from Bangkok, but also with a number of international flights from Asia.

Here's an approximate guide to fares:

* The last three destinations might seem expensive but bear in mind these are different provinces. Chiang Rai is 2 hours away, for example. Buses leave the local bus station hourly to these destinations, and you can fly too.

It's preferable to have your airport-hotel transfer sorted out before you arrive in Thailand. It's one less thing to think about on the big day of travel, and one less obstacle to navigate upon arrival.

Since I've had kids I really do prefer a pre-arranged hotel transfer. All I have to do look for our name and jump in the comfortable mini-van, rather than having to juggle kids and baggage and a tired wife in a taxi rank queue.

Planning makes for a less stressful trip, even if that just means knowing how much (approximately) in cash you'll need for a public taxi.

Rest assured, though, in Thailand it's really easy to get a taxi. So if you don't pre-plan and arrive at an airport with no idea of the local area, you can guarantee there'll be taxis on hand to take you to your hotel.

It pays to carry change with, literally. Have some 20, 50 and 100 Baht banknotes to hand to pay the driver. Some drivers may not have much change, so if you only have a ฿1,000 note  you may lose a little. Having lower denomination notes is also useful for tipping.

Got an airport taxi experience you want to share? Leave it in the comments section below.